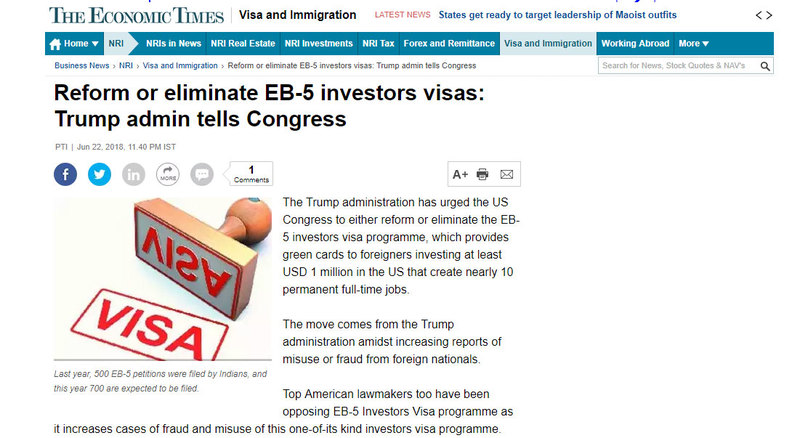 The Trump administration has urged the US Congress to either reform or eliminate the EB-5 investors visa programme, which provides green cards to foreigners investing at least USD 1 million in the US that create nearly 10 permanent full-time jobs.

The move comes from the Trump administration amidst increasing reports of misuse or fraud from foreign nationals.

Top American lawmakers too have been opposing EB-5 Investors Visa programme as it increases cases of fraud and misuse of this one-of-its kind investors visa programme.

"The EB-5 regional center programme, which is set to expire on September 30 of this year, is in dire need of reforms to better protect US investors, businesses and communities against fraud, abuse, and mismanagement," L Francis Cissna, Director of the US Citizenship and Immigration Services told lawmakers during a Congressional hearing this week.

"More importantly, reforms are needed to protect against national security risks that allow foreign nationals to invest for the purpose of laundering money or conducting espionage against us," Cissna said.

EB-5 investor visa programme allocates up to 10,000 visas annually to foreign nationals, with a per country cap of seven per cent.

While India is the third highest filer of EB-5 visa application after China and Vietnam, majority of fraud and complaints of misuse have been coming from China.

Last year, 500 EB-5 petitions were filed by Indians, and this year 700 are expected to be filed.

The rate of rejection of applications for Indians under EB-5 stands at around 20 per cent, while the general denial rate is 10 per cent because of issues related to documentation and source of funds.

"The growing demand for EB-5 has spread throughout India especially Chandigarh, Punjab, Delhi, Mumbai, Tamil Nadu, Karnataka," said Abhinav Lohia from CanAm, which had 50 investors from India in 2016, 97 in 2017 and are expecting 200 this year.

Testifying before the Senate Judiciary Committee, Cissna said that the EB-5 Regional Center programme was set to expire on September 30, 2018.

"In the last decade, the programme has been re-authorised by Congress without added safeguards or tools for the Department to better operate the programme. In the absence of legislative reforms, I believe Congress should indeed consider allowing the programme to expire," he said.

In 1990, when Congress created category 5, the goal was to stimulate the economy through job creation and capital investment.

Two years later, with unemployment climbing, Congress created the Regional Center Program and set aside EB-5 visas for those who invest in commercial enterprises associated with regional centers.

While the Regional Center concept facilitated more investments, it also opened the door for abuse, Cissna said, adding that there are indications that the programme has been used to undermine US national security with 19 cases of confirmed national security concerns in five years alone.

"We have also seen cases of fraud taint the programme and undermine public trust. Unscrupulous operators have preyed on foreign investors and, in turn, have harmed communities across that rely on these economic development dollars," he said.

"Some schemes have been massive, involving hundreds of millions of dollars where this - where the primary motivation of the operators may not be genuine investment, but simply making money off of the EB-5 programme," the USCIS head said.

Senator Chuck Grassley, Chairman of the Senate Judiciary Committee said as interest in the EB-5 Regional Center program had grown, so have cases of fraud, cases of corruption and threats to national security.

There are many, many well-documented examples of inherent problems in this programme, he rued.

Grassley referred about the ex-wife of China's third most powerful government official who pleaded guilty to committing EB-5 fraud by submitting false documents as part of a scheme to escape to the US with stolen funds.

In January, a group of over 120 Chinese nationals sued an Idaho real estate development company and claimed they were fraudulently coerced in investing over USD 60 million.

Ranking Member Senator Dianna Feinstein argued that this should be eliminated entirely.

"I believe it's wrong to sell American citizenship. This is a special country, although after what happened yesterday, maybe some of us think less of it. But citizenship should not be for sale like a commodity on the stock exchange," she said.

The program is deeply susceptible to fraud. It involves large pools of moneys, recruited overseas, far from US regulators, she said.

Example after example demonstrate how flawed the programme really is. For instance, in 2013, the SEC charged a couple with stealing funds from foreign investors and diverting funds to other businesses for personal use, sh added.

Senator John Cornyn from Texas, however, supported the continuation of the programme with reforms. He said EB-5 had helped in revival of the economy.

"After the Great Recession of 2008, if it weren't for creative investment vehicles like the EB-5 programme, I hate to think that the economy would have been much worse than it actually was, but there are numerous infrastructure and business development projects in my state that have benefited from being able to access the revenue created through the EB-5 programme," Cornyn said.