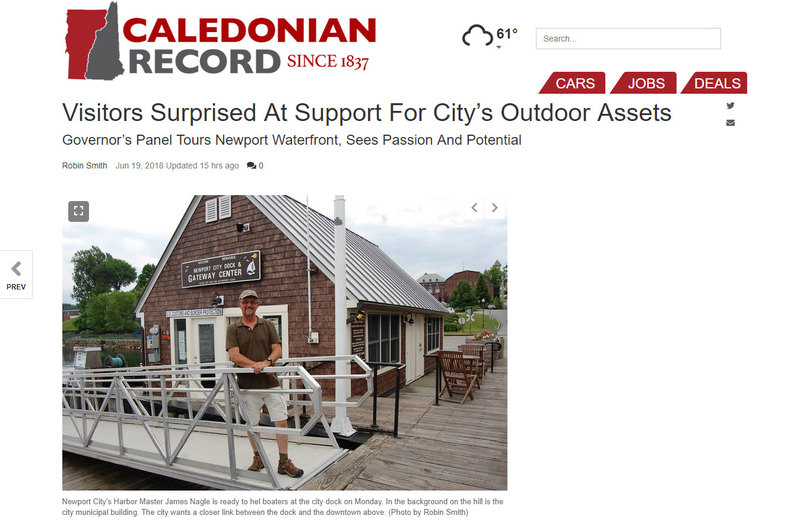 A committee of business leaders and community groups formed by Gov. Phil Scott to explore the value of outdoor recreation to Vermont’s economy found a lot to like in Newport City on Monday.

The steering committee of the Vermont Outdoor Recreation Economic Collaborative toured the city’s existing trails, bike paths, parks and boardwalk, saw the potential of Bluffside Farm and watched thundershowers roll in over the city dock at Lake Memphremagog at the Gateway Center.

What he saw on the tour was the city’s potential. He also saw the need for larger or combination grants, like the $425,00 matching grant given by Northern Borders Regional Commission to the Vermont Land Trust for the proposed bridge over Scott’s Cove to link Bluffside Farm with Prouty Beach.

Committee members were also impressed that the city has the community support to use outdoor recreational assets to drive economic development. They asked how the city did it, because usually the investment in infrastructure is a tough lift in economically challenged communities.

When that collapsed, the residents and eventually elected city officials were ready to see the potential for the Bluffside Farm, supporting the purchase by the Vermont Land Trust and the future investment in outdoor recreation here rather than having it sold to private investors for lakeshore mansions.

The investment in a waterfront pathway by the Pomerleau family at the Waterfront Plaza added to the enthusiasm for opening up the lakeshore to recreation uses, Geraghty said.

The same kind of enthusiasm led to opening access to downtown to snowmobilers this past winter on a trial basis, which was deemed a success.

Waterfront events, like Wednesdays on the Waterfront, showed the potential as well, attracting locals and tourists, she said.

Geraghty, who’s also been the acting chairman of the renamed Newport Downtown Development Association, said the focus on outdoor recreation became integral to the city’s vitality, linking the downtown to outdoor events.

City manager Laura Dolgin said it took time but there were tipping points along the way.

Now, the city is expecting a report on how to create a multi-year plan to reorient the city to the waterfront for economic benefit, Dolgin said.

Among the potential improvements that the city could make using grants and other funding sources is creating “transient” docking for boaters who want to make day trips or overnight trips to the city via the dock, says James Nagle, harbor master.

The city dock is almost 100 percent slips and moorings for seasonal boaters, which means tourists cannot dock for a downtown meal or shopping at the city, Nagle said. A U.S. Coast Guard veteran, Nagle said he has researched public marinas and found Newport’s is not well-used or known.

Newport City probably has “the only marina in the Northeast that doesn’t have a waiting list” for seasonal slips or moorings, he said.

That reflects the fact that it’s not marketed and it’s not available for tourist boating.

He said the city could triple its transient dock space from 30 to 90. He’d like to add services and a public pavilion to the east of the dock for those transient boaters, and set the stage for entrepreneurs to run the services.

“We’ve got this million dollar view. But we’ve got this Lilliputian shoreline,” Nagle said of the dock and mooring space.

He also noted that 90,000 people are using the Northern Forest Canoe Trail from New York to Maine. A section runs along the border at the Eagle Point wildlife area just north of the Bluffs.

“We are interacting with zero of them,” Nagle said due to lack of marketing and access.

Members of the committee said they also want to offer expertise and help to entrepreneurs who could operate businesses in conjunction with public outdoor recreational facilities like an expanded city dock.

Michael Snyder, chairman of the committee and head of Vermont Forest, Parks and Recreation, said the governor sees outdoor recreation in Vermont as an economic development driver. The committee can offer a portal to the governor and the Legislature, he said.

Members also said that they want to help coordinate marketing of the state’s many outdoor recreation assets and provide expertise to the city.