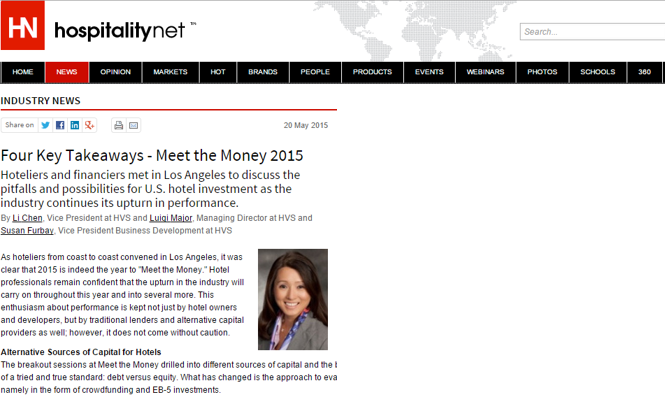 As hoteliers from coast to coast convened in Los Angeles, it was clear that 2015 is indeed the year to "Meet the Money." Hotel professionals remain confident that the upturn in the industry will carry on throughout this year and into several more. This enthusiasm about performance is kept not just by hotel owners and developers, but by traditional lenders and alternative capital providers as well; however, it does not come without caution.

Alternative Sources of Capital for Hotels
The breakout sessions at Meet the Money drilled into different sources of capital and the best way to structure a deal in terms of a tried and true standard: debt versus equity. What has changed is the approach to evaluating and funding projects, namely in the form of crowdfunding and EB-5 investments.

Crowdfunding has become fertile soil for entrepreneurs in nearly every field, but its proclivity among the real estate development and investment community is relatively new. Crowdfunding allows hotel developers and buyers to raise equity from a large pool of small investors who may or may not be accredited by the SEC. This is seen as one of its main advantages.

Crowdfunding comes with mixed reviews. While some believe in its potential to raise additional capital to close the gap between debt and equity, crowdfunding poses challenges for high-value hotel investments. Bill Sipple, Executive Managing Director of HVS Capital Corporation, said that while crowdfunding can be effective to close the gap between debt and equity, there are practical limitations on the amount of funds one can raise—and this can leave a project in limbo. $1 or $2 million just isn't enough to move the needle for a full-service hotel transaction with total capitalization upward of $50 million.

Another potential challenge is creating a pool of investors who agree on the terms of the investment in a crowdfunded hotel project. Not every investor prefers to stay in the deal for five or more years, and there are other possible points of contention that need to be resolved before enough money builds into a foundation for a hotel development or acquisition. On the plus side, crowdfunding can prove an alternative means of closing the shortfall in the capital stack and is often used as mezzanine debt or preferred equity. Hence, even with its limitations, this emerging source of capital is not to be overlooked.

EB-5 Investment: How it Works and How Much it Can Grow
Most investors active in real estate are familiar with the U.S. government's EB-5 program, created by Congress in 1990 to stimulate the U.S. economy through job creation and capital investment by foreign investors. Those granted an EB-5 visa are obliged to make a capital investment of either $500,000 or $1,000,000 in the establishment of a U.S.-based business, depending on whether the investment is in a Targeted Employment Area (TEA). EB-5 funding can be used in several ways within the capital stack, most commonly as a first mortgage position, in the form of preferred equity or subordinated debt.

EB-5 offers some distinct advantages with respect to hotel financing. As EB-5 investments are not typically subject to traditional underwriting criteria, they can be deployed as first mortgage debt for projects that do not meet the requirements of an institutional lender. Though the EB-5 program has already proved popular and garnered much attention, its potential is still sky-high: EB-5 visas currently account for less than 1% of the visas issued by the U.S. annually. Given the opportunity they provide to both U.S. and foreigners, many believe hotel investments—which are particularly well suited to the terms of the EB-5 investment criteria—will expand in the coming years.

Foreign Capital Flowing from China
The U.S. enjoys a reputation as a strong, safe place to invest in hotel real estate. This is in spite of the growing strength of the U.S. dollar, which has worked to deter some international travel from U.S. markets. Chinese investors, in particular, are actively seeking out franchise hotel opportunities, especially in markets along the east and west coasts. Hilton, Marriott, and Starwood stand out among hotel brands with a strong international profile, and interest among Chinese investors in these brands' full-service assets is expected to remain high for the next three to five years.

The Chinese government continues to encourage investment in overseas properties because, among other reasons, the supply of four- and five-star hotels in China has exploded over the past several years, while demand has slowed. Institutions such as Industrial and Commercial Bank of China and Bank of China have branches in cities in the eastern and western U.S. to support these investments, and the majority of their loans are for commercial real estate.

The chief concern for Chinese investors in U.S. hotels is the cost of a brand-mandated property improvement plan (PIP). Investors put their money into a hotel's flag, and that flag depends on keeping up with brand standards; if the property falls behind, it can lose its lucrative flag, which can seriously threaten the hotel's viability. Hence, the terms of a hotel brand's PIP should be central on any investor's radar.

Challenges Going Forward: Inflation's Impact on Hotel Financing
According to HVS President and CEO Stephen Rushmore Jr., MAI, hotel markets across the U.S. have been outperforming their prior peak year-after-year, which has justly prompted enthusiasm in the investment market. Nevertheless, industry participants remain aware that the market will peak again and are preparing for the inevitable down cycle. Richard K. Green, Director of the University of Southern California Lusk Center for Real Estate, presented on some of the factors affecting the future of U.S. real estate. Among these were economic uncertainties related to an unstable Euro zone, as well as slowing economic growth in China and emerging international markets.

These worldwide economic concerns bring mixed results for investors in U.S. real estate. The U.S. economy has become significantly more attractive to foreign investors. The strengthening of the U.S. dollar, however, has resulted in fewer U.S. exports and reduced profits for American firms that operate abroad. The ascent of the dollar also mutes inflation, which complicates the Federal Reserve's judgment about when to raise interest rates.

Conclusion
Apart from Richard K. Green's well-argued points about the international impacts on U.S. real estate, two additional factors were noted throughout the Meet the Money conference. These were a potential rise in interest rates and the risk of a new surge in hotel supply. Although supply increases have been minimal over the last few years, the greater availability of capital, low interest rates, and stellar performance in the lodging sector are accelerating the attractiveness for new hotel development, and this has brought a bevy of new hotels into the pipeline.

The crucial component to securing financing for hotel investors in the U.S. and abroad is strong, substantiated figures on a hotel's performance, revenue, expenses, and present and future value. This opinion was universal at Meet the Money, as such due diligence can prove the difference between a successful hotel investment and one that goes unfunded or loses value in the long run.