Overlooking immigrants who boost the economy 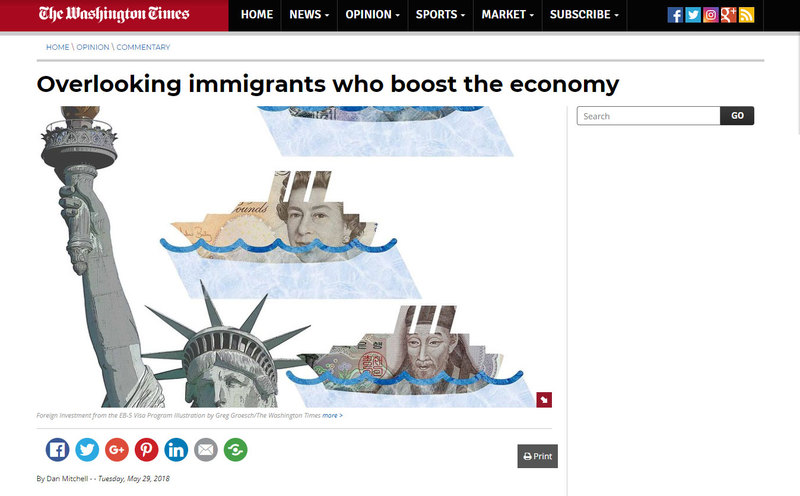 The first and second groups presumably will never agree with each other, but it seems that everyone should agree with the third group. Immigrants who unambiguously increase the nation’s per-capita gross domestic product are a win-win. That’s the goal of the EB-5 program, which allows foreigners to pledge a certain amount of investment that will result in the creation of American jobs in exchange for permanent resident status.

Yet not everyone supports this idea. In The Washington Times on May 16, Rep. Bob Goodlatte, Virginia Republican, and Sen. Chuck Grassley, Iowa Republican, made the case that Obama-era regulations that would sabotage the program “are a valuable first step that would curtail abuse in the program and bolster job creation and economic growth in rural and distressed areas.”

The congressmen cite the failure to pass their bipartisan proposal as reason to justify regulatory action over legislation. Despite a brief acknowledgment of the problem of “unconstitutional executive overreach,” they exhibit little understanding of how the executive branch has moved so far beyond its constitutional constraints.

Presidents often seek to expand their power, but the biggest blows to constitutional checks and balances come in the form of congressional abdication of the responsibility to make law. Too often members of Congress would rather diminish their own constitutional roles in order to dodge accountability by allowing unelected bureaucrats to make policy. While Republicans have control of the House, Senate and executive branch, they should try to change policy through legislation, yet they have not made a good-faith effort to even try.

That two prominent members of Congress are now repeating this folly under the guise of “restoring integrity” to anything is a shame. The fact is that this is a good program that may need some reforms, yet not “reforms” designed to cripple the program. A reform and expansion of the program would add new jobs and investment in U.S. infrastructure in a free-market-based manner. The free market naturally will provide a magnet for more investment into urban areas, and the way to get more investment in rural areas is to expand the program, not to micromanage through regulation.