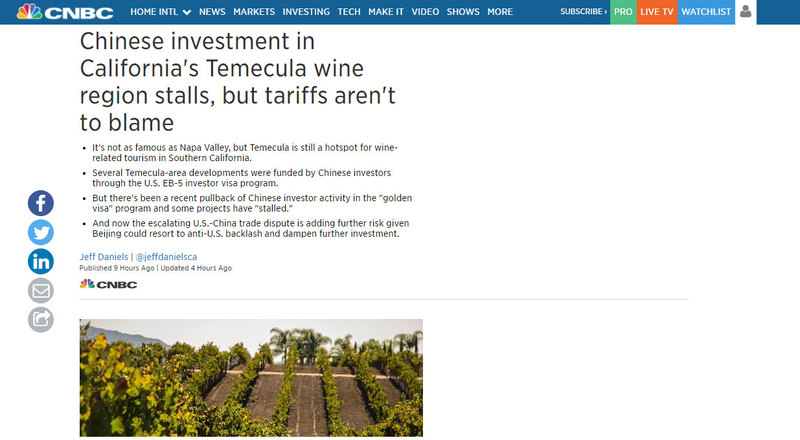 All the rhetoric over trade wars and tariffs could take a toll on a California wine region that's already seeing a slowdown in investor activity.

California's Temecula Valley wine region has been a popular place for Chinese investors, but lately there's been a pullback in those dollars and some projects have "stalled."

The Temecula area, located about 85 miles southeast of Los Angeles, has about 40 wineries and attracts nearly 3 million visitors annually. The Riverside County area is not as famous as California's Napa wine region but is still a hotspot for tourism and boasts award-winning wines.

It has also attracted wealthy Chinese investors over the past decade through the U.S. government's EB-5 program, or the so-called golden visa.

The EB-5 program allows Chinese individuals to invest as little as $500,000 in a business to get a green card. However, an escalating trade dispute between the U.S. and China could make it tougher to attract such investment.

Indeed, the Chinese earlier this month slapped a new tariff on U.S. wine exports. And Beijing could spur an anti-U.S. backlash that discourages Chinese citizens from investing in American businesses.

Regardless, there has already been a pullback of Chinese investors that's not tied to the current trade spat. Beijing imposed policies a few years ago that curbed money outflows.

"It's become much more difficult to get money out of China than it was two years ago," said Stephenson.

Still, several large real estate developments backed by Chinese money are already underway in the area. One of Rancon's current projects in the Temecula area is expansion of Europa Village, a European wine-themed resort development with vineyards, lodging and a retail component.

A second project is the 290-acre Europa Vineyard Estates, a high-end residential community with vineyards.

According to Stephenson, roughly one-third of the capital for the Europa development is from EB-5 investors and the remainder from equity investors and a bank loan. He said Chinese-born participants represented the lion's share of the EB-5 money.

Another major project in the area funded with Chinese money is Twelve Oaks, a 135-acre winery resort going through the planning phase with county officials. Similarly, there are hotel-related projects in the area with EB-5 financing from the Chinese.

"We've become a major tourist destination," said Danny Martin, president of the Temecula Valley Winegrowers Association and owner of Pauba Ridge Vineyard. "One of the biggest drivers for us is the proximity to 21 million people within an hour and a half."

There have been "a couple of bumps in the road" in recent years for the Temecula region, according to Martin. He said that includes a few projects that have "stalled" due to a tightening up of Chinese money and EB-5 visa issues where the investors couldn't take their money out.

Another challenge is Chinese-born investors have become frustrated by lengthy wait times to get their EB-5 U.S. visas. There's also uncertainty about the future of the EB-5 program beyond its current six-month extension.

"If you're putting in a half-million bucks put in a green card, and you have to wait four or five years, you're not going to be too excited about it are you," said Bernard Sidman, an immigration lawyer in Los Angeles. "And it could be longer."

There's an annual worldwide quota of about 10,000 annual EB-5 U.S. immigrant visas per year The Chinese are oversubscribed on the list and can expect to wait four years or longer to get the initial green card.