With better regulation, the wealthy foreign investor program can be successful 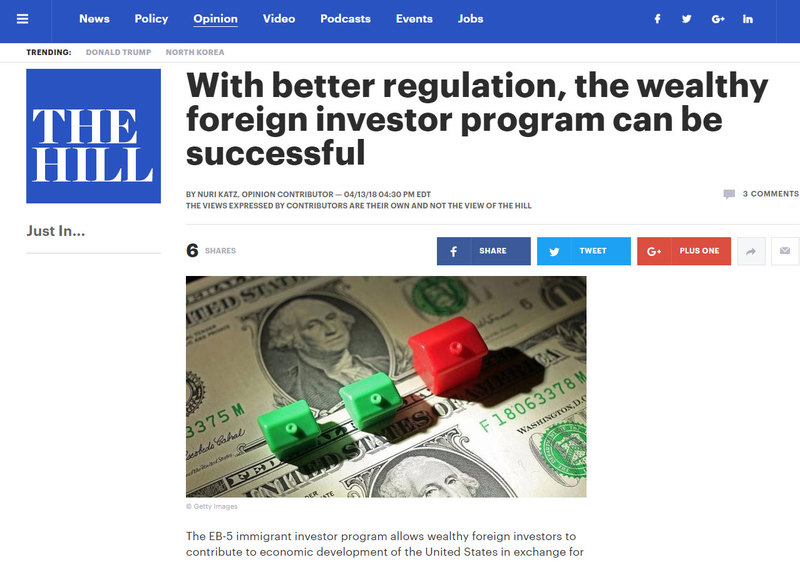 The EB-5 immigrant investor program allows wealthy foreign investors to contribute to economic development of the United States in exchange for paths to citizenship. The program certainly has its flaws, but much of this criticism is aimed at the wrong issues and not really at the program’s flaws.

While EB-5 it is most often perceived as a way for wealthy immigrants to “skip the line” in obtaining U.S. green cards, the usual 10-year wait in exchange for $500,000 or $1 million is hardly an “easy way in”. There are other more important and more serious flaws with the program.

The truth is, EB-5’s major flaws are less about the program’s concept than they are about its execution. Unfortunately, inadequate government oversight and failure to make appropriate changes to the program over the past couple decades has resulted in a system that, while originally intended to create jobs and spur the economy, has instead created financial loopholes for developers and investors alike.

That said, other citizenship by investment programs (CIPs) in the world are indeed very successful and show that when regulated properly, economies can thrive while quality investors and immigrants migrate to a country that better suits their needs.

Generally, for incoming investments to qualify for EB-5 programs, projects must be qualified by the government as what are known as “regional centers,” usually created by American real estate developers searching for overseas financing for their development projects. These developers need to qualify certain geographical boundaries and prove that they will create 10 full-time jobs for each investor in a regional center. Interestingly, meeting these requirements is easy with some careful crafting of business plans by economic consultants who are not involved or staked in the actual future developments.

Geographical boundaries are subject to gerrymandering, allowing most investors to invest the minimum $500,000 instead of the higher level of $1 million. A regional center can qualify for EB-5 while containing wealthy and poor neighborhoods, but the developer is free to focus on the wealthy neighborhoods since they fall within the designated area.

By investing in a regional center with less-developed areas, the investor can qualify for a green card by investing only $500,000 even if they are actually investing in wealthier areas that normally would require a $1 million USD investment. Even though job creation is the reason for awarding a green card, the government does not follow up to make sure jobs are actually created.

As developers receive their letters showing they have received government approval to award green cards in exchange for an investment, they often immediately begin their investor roadshows, touting U.S. government approval. It is during this courting of investors that EB-5 is especially prone to marketing abuse. Developers trying to attract foreign investors usually tout the fact that they have government approval of their regional center as proof that their project is economically sound and a good investment.

Foreign investors are led to believe that their investments will be safe, just because a government bureaucrat checked some boxes on a business plan and approved a regional center.

This is just one of the marketing tactics deployed as a result of weak oversight. Since EB-5 is a temporary program, it must be extended by a continued resolution from Congress, an exercise that has occurred once every few months for more than 25 years. As a scare tactic, international marketers can mislead investors into believing that the program will soon end and that it’s “now or never.”

With respect to pricing, since its launch in 1990, EB-5’s minimum investment requirements have not changed, and have not kept pace with inflation. As they could more than 20 years ago, immigrants can invest $500,000 in underdeveloped areas or $1 million in developed areas. Calculating for inflation, an investment that cost $500,000 in 1990 is worth over $950,000 today — nearly twice as much. By comparison, the United Kingdom now requires a minimum investment of £2 million GBP (about $2.5 million USD).

EB-5 can play a critical role in addressing one of the biggest issues in the U.S., that of rebuilding our nation’s infrastructure. The EB-5 program has the potential to generate several billion dollars of revenue each year, which could be allocated more wisely. Why not channel EB-5 revenue toward an infrastructure fund?

Such a fund, overseen by a board of directors composed of private sector members, could help ensure that this money goes where it is needed most, and not necessarily to profit agents, consultants, and all sorts of other peripheral organizations trying to take a piece of the EB-5 pie.

We have enough history to determine that regional centers generally do not work, and few complete the projects as glowingly as predicted in their quests for approval, if at all. Enough is enough — those not performing should be shut down.

When billions of dollars are in play, regulation is required. However, regulation is not a magic word. Regulation is nothing without proper and strict oversight. A commission of private and government sector individuals working together could and should regulate and oversee the EB-5 program and its dealings.

It’s no secret that the U.S. EB-5 program is not perfect. Qualifying to take in money as EB-5 investments is easy enough with some statistical and verbal manipulation, and the program is loosely regulated and has not kept pace with inflation. With a fresh perspective and some careful oversight, EB-5 has the potential to be an even greater source of revenue and redevelopment for the United States.