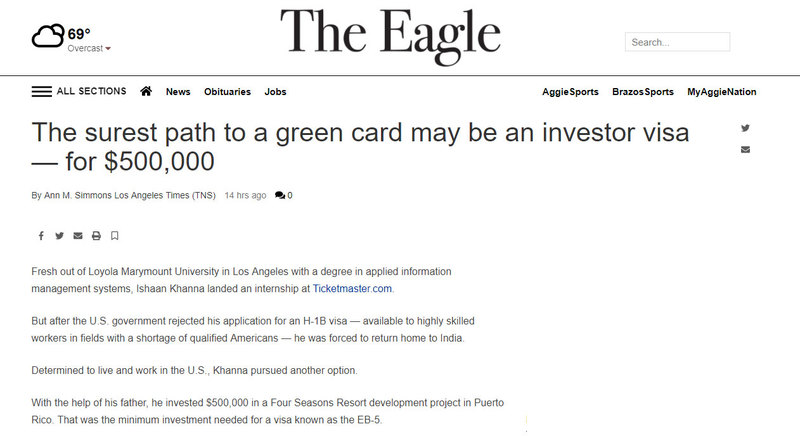 Fresh out of Loyola Marymount University in Los Angeles with a degree in applied information management systems, Ishaan Khanna landed an internship at Ticketmaster.com.

But after the U.S. government rejected his application for an H-1B visa — available to highly skilled workers in fields with a shortage of qualified Americans — he was forced to return home to India.

Determined to live and work in the U.S., Khanna pursued another option.

With the help of his father, he invested $500,000 in a Four Seasons Resort development project in Puerto Rico. That was the minimum investment needed for a visa known as the EB-5.

Khanna was scheduled to arrive in the U.S. this month, with dreams of working in the tech industry and eventually launching a startup in Silicon Valley.

At a time when obtaining legal residency in the U.S. is getting harder, the investor visa may be the surest way — at least for the rich.

Here are some basics about the visa program:

–– How did it start and what are the requirements?

The EB-5 program was created in 1990 to stimulate the U.S. economy through capital investment and job creation.

Foreigners can qualify for permanent U.S. residency — a green card — if they invest at least $1 million in a new business that creates at least 10 jobs. The threshold drops to $500,000 for investments in high-unemployment or rural areas.

To apply for the visa, potential investors must file a petition known as an I-526 to U.S. Citizenship and Immigration Services. If the petition is approved, the investor applies to the State Department for the visa — which allows permanent residence, conditionally. Once an investment project meets the requirements, the investor gets a green card. Immigration attorneys say the process can take up to two years.

The government caps the number of green cards awarded under the program at 10,000 each fiscal year. No more than 7 percent of that total may come from any one country.

The investor’s spouse and unmarried children under 21 years of age are also eligible for residency under the program.

–– How popular is the program and who uses it?

The visa is available to people of all nationalities, except those from the six countries under the travel ban instituted by the Trump administration: Chad, Iran, Libya, Somalia, Syria and Yemen.

More than 82 percent of applications in 2016 — the most recent year available with a breakdown by country — came from mainland China, according to data from immigration authorities. The 7 percent cap on any one nationality has led to a huge backlog of Chinese applicants.

The next biggest applicant pools came from Vietnam, at 3 percent of the total, and India, at 2.7 percent. Those were up considerably from the previous year.

India in particular represented a disproportionate share of H-1B visas, which have become harder to renew because the U.S. government has begun a more vigorous vetting process for computer programmers.

“We’re seeing a lot more Indian applicants because there are a lot of Indians here on H-1Bs who are looking at a 10-year wait to get a green card through employee sponsorship,” said Robert Blanco, an attorney at the Los Angeles law firm Wolfsdorf Rosenthal that helped Khanna secure his visa. “EB-5 is a faster way compared to that.”

Lawyers at STEP America, which specializes in helping investors with immigration issues and is based in the United Arab Emirates city of Dubai, said there has been a 60 percent increase in interest in the U.S. investor visa program among people living in Arab nations, including many Indian nationals.

“Generally, there is an understanding that the doors to (U.S.) immigration are closing,” said Shai Zamanian, a partner in the firm. “Approval rates (for EB-5 visas) are quite high. People aren’t going to wait until next year, or perhaps a second term (for President Donald Trump] to see whether their chances are further limited.”

He said instability in the region is also driving expatriates there to “look for a safe haven” — even if it cost $500,000.

Jit Gupte, a 50-year-old Singapore national who has lived in Dubai for almost 12 years, said he has seen relatives suffer through the “tortuous wait” that comes with applying for other types of U.S. visas.

He decided to skip that and invest in SkyRiseMiami, a high-rise leisure, entertainment and tourism center in downtown Miami. He and his family plan to move to San Diego in June on an investment visa.

“We’re not going to be seen as someone who is going to take away so-called American jobs,” he said. “We’re actually going to create jobs out of investment.”

–– What’s the economic impact of the program?

Researchers at Western Washington University found the visa program generated more than $11.2 billion in capital investment in 2014 and 2015 for development projects across the country.

–– What’s the government’s view of the program?

Not everyone loves it.

Over the years, the program has been accused of duping foreign investors and misspending cash that was supposed to go to job-creating projects.

For example, a December 2016 lawsuit filed by the Securities and Exchange Commission alleged that a Newport Beach lawyer misspent at least $9.5 million from 131 investors who wanted to participate in the program.

In June 2016, the SEC sued an Orange County, Calif., couple, saying they misappropriated millions of dollars that was supposed to be used to build a cancer treatment center. In 2015, the SEC sued a Redlands, Calif., doctor, saying he and an associate misspent half the $20 million they raised from Chinese investors hoping for U.S. residency.

Some lawmakers have proposed adding protections and oversight to make the program more secure for investors.

Others have questioned whether some of the projects being funded by EB-5 investors would have happened anyway, with domestic investment.

Lawmakers have also proposed increasing the investment requirement to $1.25 million, or $925,000 in economically distressed or rural areas.