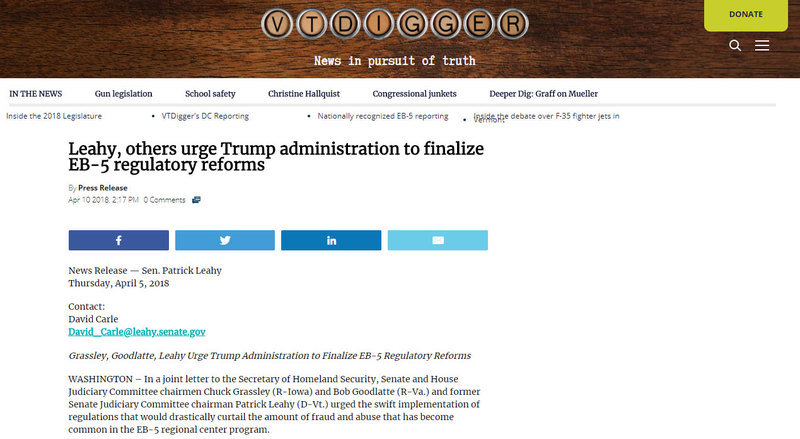 In a joint letter to the Secretary of Homeland Security, Senate and House Judiciary Committee chairmen Chuck Grassley (R-Iowa) and Bob Goodlatte (R-Va.) and former Senate Judiciary Committee chairman Patrick Leahy (D-Vt.) urged the swift implementation of regulations that would drastically curtail the amount of fraud and abuse that has become common in the EB-5 regional center program.

“As we have noted several times since the publication of these proposed regulations, they would, if finalized, dramatically reform the EB-5 program and re-align the program with what Congress envisioned in 1990. We were, and remain, supportive of these regulations,” the group wrote.

In their letter to Secretary Kirstjen Nielsen, the lawmakers noted their longtime, good-faith efforts at finding a legislative fix for the fraud-ridden EB-5 program, but also stated that those efforts have collapsed because of special interest groups. The lawmakers ask Secretary Nielsen to continue to do everything within her authority to clamp down on abuse of the program, and encourage her to issue the regulations without further delay.

Last month, Grassley and Goodlatte called on the Department of Homeland Security to finalize and implement these regulations after Congress failed to reform or end the regional center program. The recently-passed omnibus spending bill included a clean extension of EB-5, and did not include any reforms to crack down on well-documented fraud, abuse and national security concerns.

These lawmakers have worked for years on potential reforms to the EB-5 program. Grassley delivered a speech to his colleagues last month outlining this work and why the program should now be ended outright.

Full text of the letter from Grassley, Goodlatte and Leahy follows.

We are writing to urge your Department to take immediate steps to finalize proposed regulations published in the Federal Register on January 13, 2017, entitled “EB-5 Immigrant Investor Program Modernization.”[1] As the Chairmen and a former Chairman of the committees with jurisdiction over the fifth preference employment-based immigrant visa program (the “EB-5 program”), we believe these regulations advance the national interest and should be implemented without further delay.

We have watched with growing alarm as the EB-5 program has continued to stray further and further away from what Congress envisioned when we created it as part of the Immigration Act of 1990.[2] Some of the distortions and abuses that have come to plague this program require statutory changes. Unfortunately, while we have been intently pursuing bipartisan legislative solutions for a number of years, powerful special interest groups have stymied all efforts to reform this scandal-plagued program. Thankfully, there is much that United States Citizenship and Immigration Services can do to restore the program to its original vision.

Two years ago we wrote to then-Secretary of Homeland Security Jeh Johnson urging him to take all necessary and appropriate steps to reform this program, and we outlined in that letter what we believed those steps should be.[3] We were extremely pleased when then-Secretary Johnson issued the proposed EB-5 Immigrant Investor Program Modernization regulations in January 2017.

As we have noted several times since the publication of these proposed regulations, they would, if finalized, dramatically reform the EB-5 program and re-align the program with what Congress envisioned in 1990.[4] We were, and remain, supportive of these regulations. We believe they will generate increased capital investment for the United States economy, and will help ensure that some portion of that capital is actually invested in rural and underserved areas, as Congress intended.

As you are likely aware, since last May there have been new rounds of Congressional negotiations on the future of the EB-5 Regional Center Program. We understand that during the course of these negotiations your Department was encouraged by both individual Members of Congress and stakeholders to not finalize the proposed regulations, since a potential legislative solution could be imminent. Recently, these good-faith negotiations collapsed due to the opposition of the same special interest groups who have worked to derail all efforts to reform the program.

Because we do not foresee a legislative solution in the near term, we believe that it is incumbent upon you to end all delays and issue the proposed regulations in final form. The proposed regulations are firmly within your explicit statutory authority provided by Congress when we created the EB-5 program, and there can be no dispute that they address a number of serious deficiencies in the program.

We separately ask you to continue to do everything within your power, either through new administrative regulations or other programmatic reforms, to curb the rampant fraud within the EB-5 program, to include increased use of mandatory audits, site visits, and other measures to ensure securities law compliance in conjunction with the Securities and Exchange Commission.

In conclusion, we applaud your Department for issuing the proposed regulations and once again call on you to issue them in final form. We look forward to continuing to work with you once the final regulations are issued to ensure the vitality and integrity of the EB-5 program and our nation’s lawful immigration system.