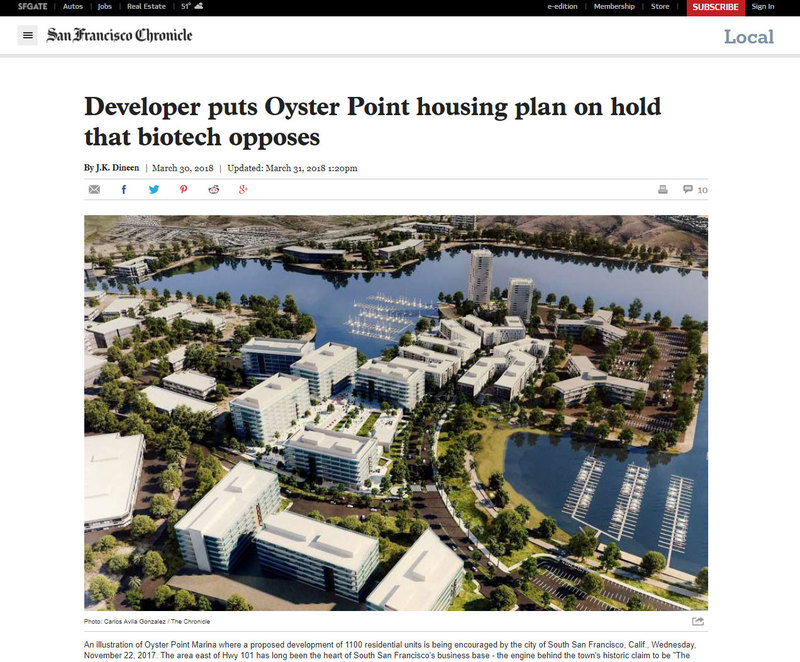 An illustration of Oyster Point Marina where a proposed development of 1100 residential units is being encouraged by the city of South San Francisco, Calif., Wednesday, November 22, 2017. The area east of Hwy 101 has long been the heart of South San Francisco's business base - the engine behind the town's historic claim to be "The Industrial City."

Facing opposition from South San Francisco’s powerful biotech industry, a developer has at least temporarily withdrawn a proposal to build as many as 1,200 housing units on the waterfront at Oyster Point.

In a March 27 letter to South San Francisco city officials, Oyster Point Development CEO Chao Wu asked that its application to add housing to a previously approved project be put “on hold until further notice.”

The request comes after a prominent biotech industry group, which includes Genentech, South San Francisco’s largest employer, had opposed the idea of housing east of Highway 101, an area that has long been one of the most important clusters of life science companies in the world. The California Life Sciences Association argued that the two uses — life sciences and housing — are incompatible and adding several thousand residents could hamper the research and development that has been the city’s primary economic engine for decades.

Last year, Oyster Point Development, an affiliate of the Chinese developer Greenland USA, filed an application to amend the 2011 Oyster Point Plan, which approved 2.25 million square feet of office and research-and-development space on the V-shaped property that wraps around the South San Francisco marina and harbor.

The revised plan proposed replacing the third and fourth phases of that office development with seven residential buildings, decreasing the commercial development by 500,000 to 750,000 square feet.

Opponents to housing at Oyster Point argued it would impede the life science work in South City, which includes some manufacturing and round-the-clock research.

They also argued the area lacks the transportation infrastructure to support housing. Oyster Point has a ferry terminal with connections to Alameda, Oakland and San Francisco’s Ferry Building. It’s about 1½ miles from the Caltrain station.

The biotech industry in South San Francisco employs 20,000 workers at 200 different companies and is expected to grow by 18,000 jobs over the next three years. Genentech, which has been in South City since 1978, employs 12,000 workers there. 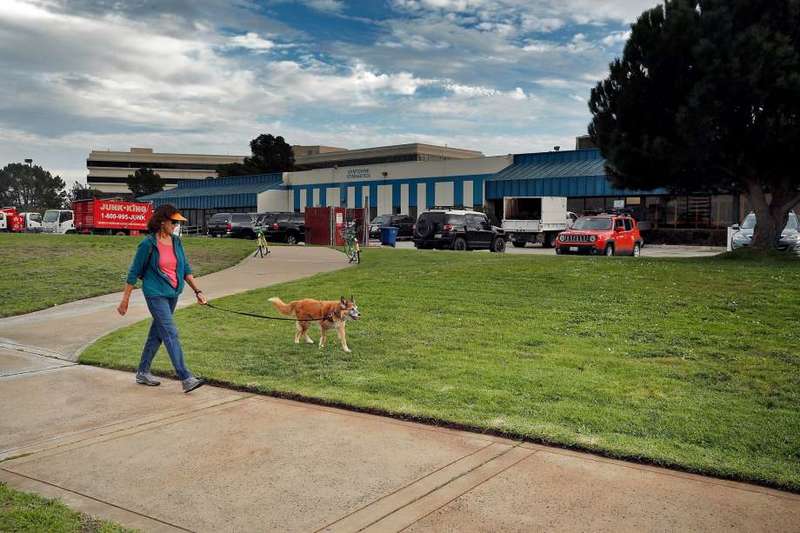 A woman walks her dog near the warehouse offices at Oyster Point Marina, where housing is proposed.

The developer could not be reached for comment on Friday, but has publicly stated that it seemed likely the biotech industry would attempt to kill the housing proposal in court by challenging the project’s environmental report.

“The implication was very obvious,” Clara Tang, executive vice president of Oyster Point Development, told the San Mateo Daily Journal. “We know the risk is out there, that there might be a potential (California Environmental Quality Act) challenge if we decide to go forward at full speed.”

Alex Greenwood, South San Francisco’s director of economic and community development, said that pausing the housing plan could be best for both sides. What happens at Oyster Point is crucial to the future of a biotech cluster that features 11 million square feet, with another 7.2 million under development, he said.

“If the developer needs to take more time to work with Genentech and other companies, that is not a bad thing,” he said. “It’s important that we get this right.”

“I was impressed by the housing proposal because it really addressed the needs of the region,” he said. “I feel we need to do as much as we can to address the lack of housing in the Bay Area.”

He said he has been heartened that some of the biotech companies that were opposed to the Oyster Point plan have been pushing for housing in other parts of the city, particularly downtown and along El Camino. South San Francisco currently has about 900 units under construction.

Still, Oyster Point represented a unique opportunity that, for now at least, seems to have been dashed.

“That is the last big contiguous parcel we have that could have been allocated for housing,” he said. “And we are going to be replacing that housing with more office and more R&D, which will only bring more employees and make problems worse in terms of transportation and congestion.”

Sara Radcliffe, president of the California Life Sciences Association, which had opposed housing on Oyster Point, said the biotech industry would continue to work to find housing opportunities elsewhere in South San Francisco.

“As CLSA said from the beginning, our concerns about that project were always specific to that project,” she said. “On the larger issue of the need for more housing in the Bay Area, we are in agreement. We think there is a lot of common ground we can find on housing that is fully in line with South San Francisco’s long-standing smart-growth, transit-oriented city policies.”