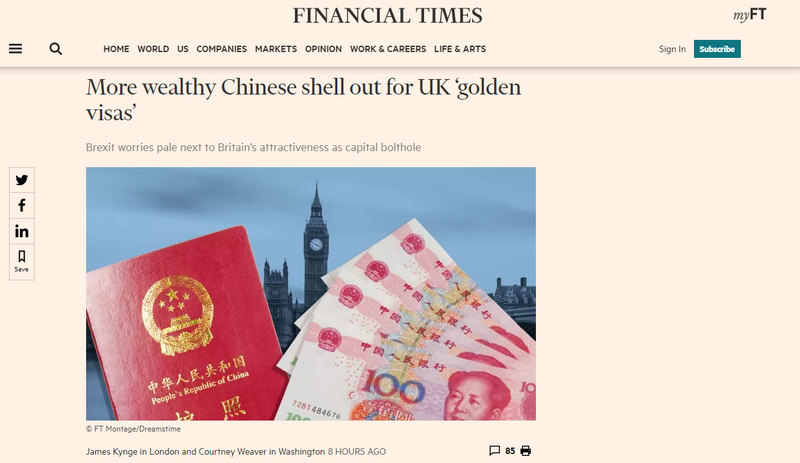 James Kynge in London and Courtney Weaver in Washington

The number of wealthy Chinese acquiring UK “golden visas” that give residency in return for investing £2m or more in assets rose sharply last year as worries over Brexit paled next to Britain’s attractiveness as a secure bolthole for international money.

Mainland Chinese took 116 of the 355 “investor visas” granted in 2017 by the UK government to wealthy individuals, up 56 per cent from the previous year, according to official statistics made available to the Financial Times by LJ Partnership, a London-based private wealth partnership.

So dominant were mainland Chinese in the investor visa scheme last year that they outnumbered Russians, the next biggest recipients by country, by 250 per cent. If Hong Kong and Macau recipients are counted, then 146 Chinese got investor visas last year, up 82.5 per cent on 2016.

“Brexit was for a while a signal for Chinese to watch and see,” said Charles Filmer, partner and head of private office at LJ Partnership. “But now Brexit just isn’t a topic that is discussed. It doesn’t make any difference at all.”

The scheme has attracted criticism because it provides the international super rich with a means of effectively buying citizenship. Supporters of the programme, however, say it helps attract wealth creators, thereby expanding the UK’s business links around the world.

One key attraction of the UK to mainland Chinese is that it is still seen as among the safest places in the world irrespective of Brexit risks, said Yu Jie, head of China Foresight at LSE Ideas, a think-tank at the London School of Economics. “The political certainty, institutional constraints and the fundamental rule of law are key drivers for Chinese investors parking their money,” Ms Yu said.

Britain has also been a handy destination for funds that wealthy Chinese have managed to get out of the country in spite of Beijing’s strict capital controls, she added. Total Chinese investment into the UK reached $20.8bn in 2017, up from $9.2bn in 2016, according to LJ Partnership.

Education is also a big draw for investors who want to get their children educated in the best boarding schools and universities,” Ms Yu added. “It is part of the ‘nouveau riche’ getting into the ‘old money’ society.”

Some big Chinese inward investors concurred with the view that Brexit may not be a bad thing for Chinese interests. “Brexit will mean that the UK needs China more as a trade partner,” said Xu Weiping, chairman of Advanced Business Park, which is constructing a £1.7bn real estate development in London.

“After Brexit, it is most likely that UK and China will have their own bilateral trade agreement,” Mr Xu added. “This is for sure.”