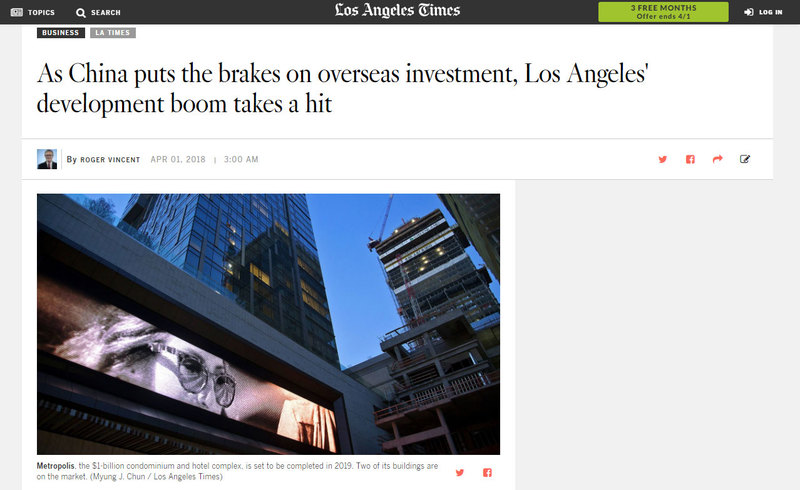 Metropolis, the $1-billion condominium and hotel complex, is set to be completed in 2019. Two of its buildings are on the market.

Last year, Chinese investors interested in buying or developing property in Southern California peppered World Trade Center Los Angeles officials with questions about how best to break into the market.

What's the difference between city governments and county governments, they might ask. Or, are tax incentives for hotel builders better in Los Angeles or Santa Monica?

But daily questions such as those have nearly ceased as China's feared pullback from overseas investments has been borne out.

Stephen Cheung, president of the nonprofit agency that promotes international trade and business, said the agency is now getting about one request a month for guidance.

"Our time used to be dominated by Chinese interests because of the billions of dollars flowing in from China alone," said Cheung, who once helped a company that wanted to enter the L.A. market and instead mistakenly signed a memorandum of understanding with Pasadena. 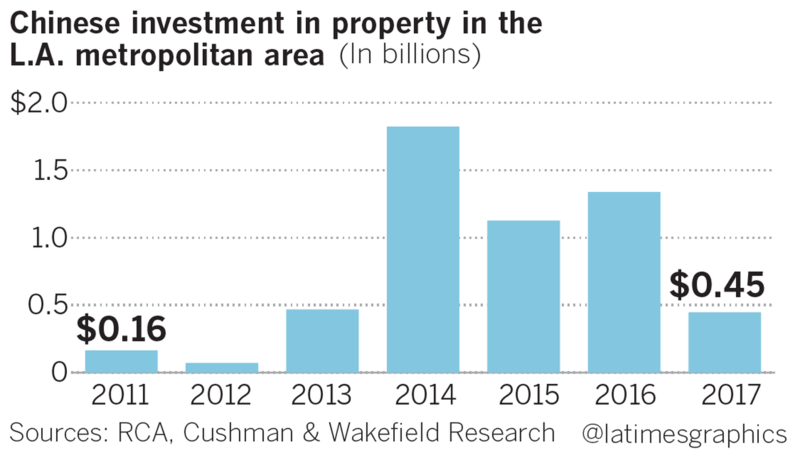 Chinese companies have been among the biggest commercial real estate investors in the Los Angeles area in the last five years, spending more than $5 billion to buy property in the region during that time, according to brokerage Cushman and Wakefield. That includes the sites of billion-dollar condominium, hotel and retail complexes being built downtown and large airport-area hotels that have been upgraded by their Chinese owners.

But they are withdrawing from some high-profile ventures as leaders in Beijing constrict the flow of money out of the country. In August, China's State Council laid down new regulations on outbound investments to reduce the risk of runaway debt and to blunt capital flight.

Also dramatically on the wane is Chinese investment through the federal EB-5 program, which allows foreigners to apply to become legal U.S. residents in exchange for investing $500,000 or more in a business that creates or preserves at least 10 jobs.

Millions of dollars raised by individual Chinese investors angling for green cards in past years have paid for such major projects as the trendy Dream Hotel complex in Hollywood and the Courtyard Los Angeles L.A. Live in downtown Los Angeles.

"There has been a huge fall-off in EB-5 funding," said Los Angeles attorney Jim Butler, who helps arrange investments from overseas through the program. 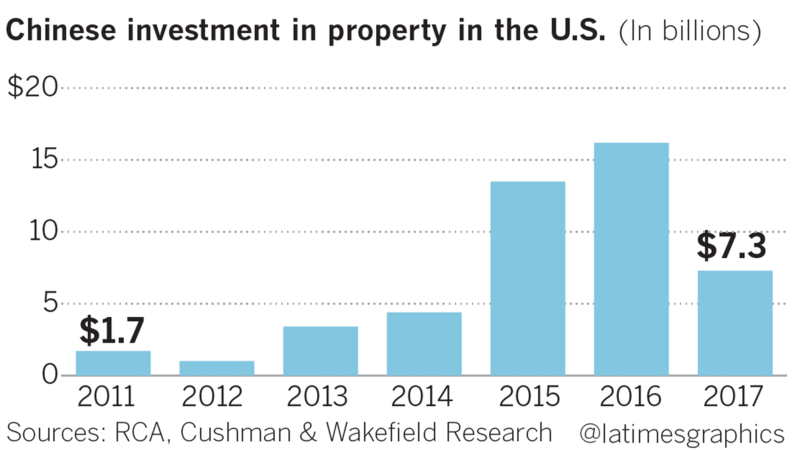 EB-5 funds from China have fallen to 28% of their normal flow established over the three previous years, Butler said, citing data from NES Financial.

Part of the decline in EB-5 investment can be traced to uncertainty over the program's future, which has been linked to various frauds and was reauthorized by Congress in the new federal budget bill only until Sept. 30.

But the broader, rapid retreat of Chinese capital in recent months is being imposed by Beijing, Butler said.

In a recent report, Cushman and Wakefield estimated a 55% drop in Chinese investment in U.S. commercial real estate took place in 2017, falling to $7.3 billion from $16.2 billion in 2016.

In the Los Angeles metropolitan area, property acquisitions by Chinese investors declined 67% in that time period even though overall investment volume fell just 1%.

There also has been a significant shift in the type of Chinese investors buying property in Los Angeles, Cushman and Wakefield broker Marc Renard said.

"Previously, the capital was primarily from the large state-controlled conglomerates," he said. "Today, it is, for the most part, very high net worth individuals." 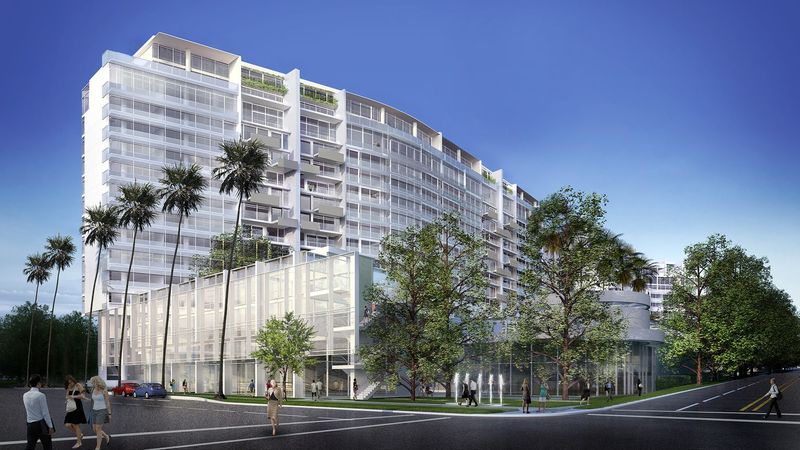 A rendering of a proposed $1.2-billion luxury condominium complex in Beverly Hills that Dalian Wanda has put on the market.

One of the most notable pullbacks has been by Beijing-based Dalian Wanda Group, one of China's largest private companies. It is looking to sell 8 acres of land on Wilshire Boulevard in Beverly Hills that is widely regarded as one of the most desirable development sites in the country.

The land formerly occupied by a Robinsons-May department store sits next to the Beverly Hilton and the recently completed Waldorf Astoria hotel. It was approved for construction of a $1.2-billion luxury condominium and hotel complex called One Beverly Hills designed by renowned architect Richard Meier.

A Wanda Group spokesman declined to comment on the planned sale. Wanda purchased the site for about $420 million in 2014 but has not broken ground. 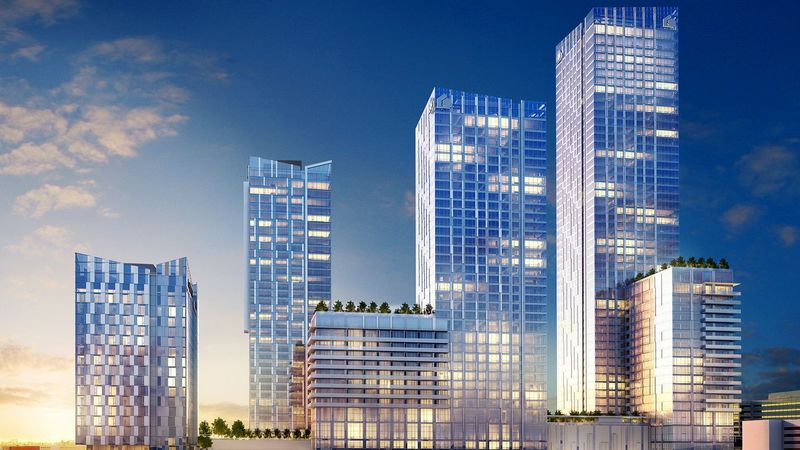 A rendering of the $1-billion Metropolis condominium, hotel and retail complex upon completion.

Chinese mega-developer Greenland USA recently started shopping around two key buildings in its $1-billion Metropolis complex in downtown Los Angeles — the Hotel Indigo and the 56-story Condo Tower 3, which is still under construction.

Whether Greenland ultimately sells depends on how much buyers are willing to pay, said Hu Gang, chief executive of Greenland USA.

"The potential for any future sale, Hotel Indigo or Condo Tower 3, would be decided based on the ebb and flow of the real estate market and the strength of the offer," Hu said in a statement.

The first two condominium towers in Metropolis have attracted strong interest from buyers, Hu said. Units are selling for more than $1,000 per square foot, according to real estate marketing company Mark Co.

Greenland will finish the second tower this year, Hu said, and is committed to completing the third tower in early 2019. It's unusual to sell a skyscraper under construction, but not unheard of in a hot market. Sales of units in the third tower have not begun

"Companies have obviously been ordered by the government to sell off or dispose" of foreign properties, he said. "This is state-directed capitalism at work. Otherwise, why are you selling this stuff so soon after it's been acquired or is still being built?"

The slowdown in Chinese investment here differs from the hard exit by Japanese landlords in the early 1990s who dropped many of their prominent U.S. properties back on the market, Soto said.

Japanese bought trophy properties at the peak of the market in the late 1980s. They were forced to unload at a loss a few years later when the economies in both countries dipped.

"These are longer-term projects with longer outlooks," Soto said of the Chinese developments.

Most of the major Chinese investment in the region has been in buying and upgrading existing hotels such as the Los Angeles Airport Marriott and Sheraton Gateway Los Angeles, and prominent sites for mixed-use development in Beverly Hills and downtown Los Angeles, most of which is still going forward. 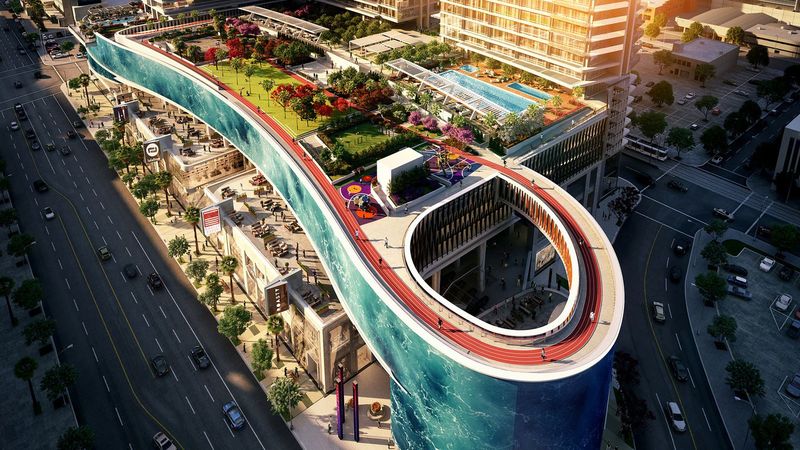 A rendering of the $1-billion Oceanwide Plaza on Figueroa Street in downtown Los Angeles upon completion.

One of the largest developments underway is Oceanwide Plaza, a mixed-use project on Figueroa Street across from Staples Center that will include a Park Hyatt hotel and more than 500 luxury condominiums along with shops and restaurants.

Beijing-based conglomerate Oceanwide Holdings has fully funded the $1-billion project, Thomas Feng, chief executive of Oceanwide Plaza, said in a statement. The project, featuring a 700-foot outdoor LED screen stretching its length, is set for completion at the end of next year. 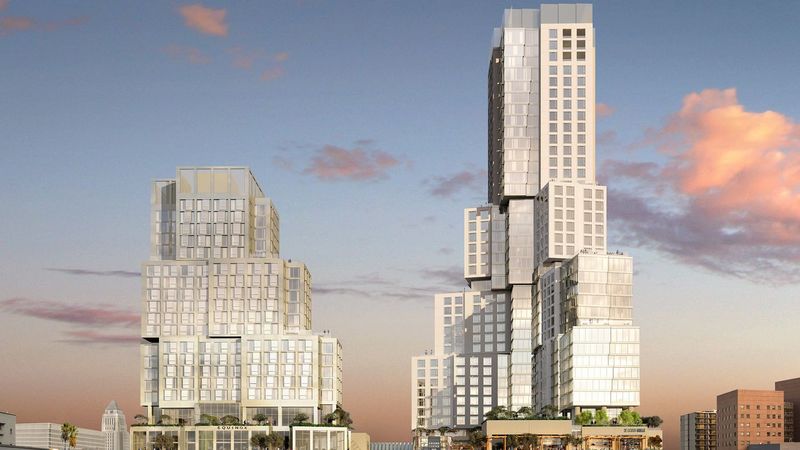 A rendering of the $1-billion Grand Avenue Project on Bunker Hill, which recently received some Chinese funding.

And the $1-billion Grand Avenue Project on Bunker Hill designed by architect Frank Gehry is set to begin construction in the fall, funded in part with $290 million from a subsidiary of China Communications Construction Group, one of China's largest state-owned companies.

Indeed, Cushman and Wakefield in its recent report predicted Chinese capital will continue to be a force in U.S. real estate markets.

Jim Costello of Real Capital Analytics said that even though Chinese investors continue to pull back on new investments, they are not bailing out en masse and are still buying more than they are selling.

But, he added, Beijing "has asked certain companies to pull back so they won't be as active in the near term, and there will be more selling."

Some property owners may sell simply out of prudence, he believes, instead of in response to government fiat.

"Just because you aren't a state-owned company doesn't mean you are immune from social pressure" to reduce financial risk, he said. "Sometimes a suggestion can be just as important as a regulation."