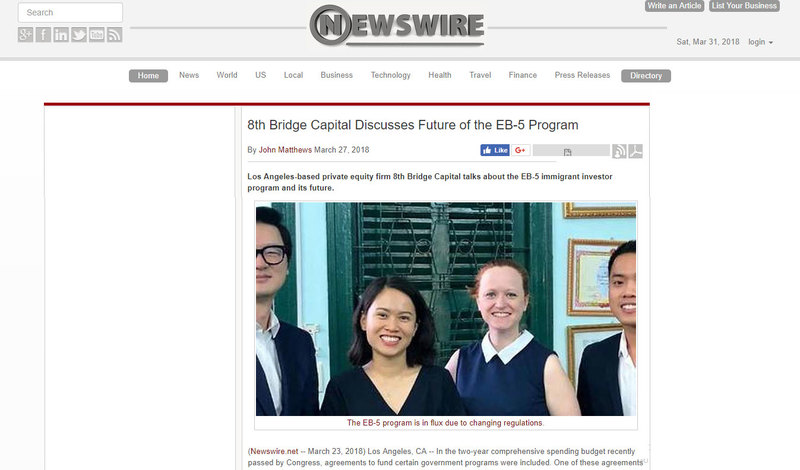 The EB-5 program is in flux due to changing regulations.

In the two-year comprehensive spending budget recently passed by Congress, agreements to fund certain government programs were included. One of these agreements centered on the EB-5 Program, providing funding through the end of March, 2018. The EB-5 Program, formally known as the Employment-Based Fifth Category Immigrant Investor Visa Program, allows for certain immigrant investors to have a path toward permanent residency in the United States. What the future holds for this program is uncertain; focus on immigration reform by the Trump Administration has left EB-5 stakeholders in the dark about what is to come with this critical program. “Uncertainty about this program has had a chilling effect on immigrant-based investments,” says a spokesperson for 8th Bridge Capital, a Los Angeles-based private equity firm that connects foreign investors with stateside real estate and business opportunities. “This program is especially beneficial in distressed rural and urban areas, helping to spur economic growth by encouraging investment.”

The EB-5 Visa Program was created in 1990 by the Immigration Act of 1990. To become lawful permanent U.S. residents under the program, immigrant investors were required to invest at least $1,000,000 into a U.S.-based business employing 10 or more American citizens. Many of these investments occur in what are referred to as “target employment areas” (TEAs), such as urban centers with high unemployment or financially-distressed rural regions. Immigrant investors that funded businesses in TEAs enjoyed a lower investment threshold of $500,000 to qualify under the program. The goal of the program at its creation and over the past two decades is to help foster economic growth in distressed areas, and is one of only five employment-based preference programs in existence in the U.S.

Congressional leaders have introduced reform bills to the EB-5 Program in recent months in an attempt to both reduce abuses of the program and to continue to encourage foreign investment in U.S.-based businesses. Immigration proposals introduced by the Trump Administration have not as yet addressed the future of the EB-5 Program. Still, the possibility for continued funding for this program has financial analysts and economic advisers around the country hopeful of the program’s future. Among the proposed reforms that are gaining traction in Congress, modifying the TEA concept to include more areas and a higher threshold for investment to $925,000 in those areas, are some of the leading proposals. Rumored reforms also include setting aside a visa quota for rural-based projects, lowering direct job requirements, and amendments to the Program’s filing and interviewing processes. “Since its inception, the EB-5 Program has helped U.S. businesses flourish with foreign investments,” adds the 8th Bridge Capital spokesperson. “Many are guardedly hopeful that Congress will find a path forward for the program, avoiding impairment of investments for the foreseeable future.” For more information, read about 8th Bridge and their full range of financial services including private equity for entrepreneurs.

About 8th Bridge Capital
Working to provide business and real estate investment opportunities for high net worth individuals in Asia, 8th Bridge Capital was created to operate as the investment bridge between East and West. The firm employs highly-skilled financial professionals who are adept at managing investments. Based in the Los Angeles metro area, the private equity firm has built strong investor relationships around the world. The firm is known for its experience with foreign investors and for its expertise in strategic advisory services.