US to suspend certain visas for Vietnamese nationals 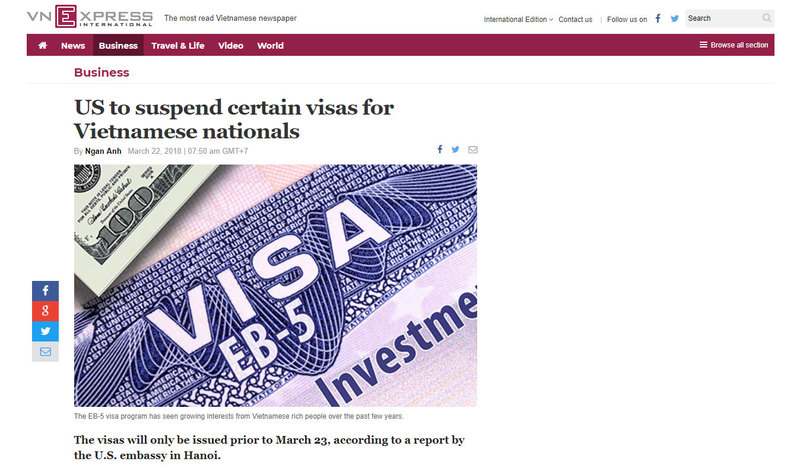 The EB-5 visa program has seen growing interests from Vietnamese rich people over the past few years.

The visas will only be issued prior to March 23, according to a report by the U.S. embassy in Hanoi.

The U.S. will temporarily cease the issuance of a number of investment and religious worker visas for Vietnamese citizens from March 23.

Those who have been scheduled for an interview for SR (religious worker), I5 or R5 visas will not be allowed to reschedule after March 23, according to a report from the U.S. embassy in Hanoi.

The EB-5 visa program has attracted growing interest from rich Vietnamese people in recent years. Under the program, entrepreneurs, their spouses and unmarried children under 21 are eligible to apply for a green card (permanent residence) if they make the necessary investment in a commercial enterprise in the U.S., and plan to create or preserve 10 permanent full-time jobs for qualified U.S. workers.

Under the program, there are two minimum qualifying investment rates: $1 million as the general rate, and $500,000 for investors in a high-unemployment or rural area in the U.S., according to the U.S. Citizenship and Immigration Service.

About 10,000 EB-5 visas are issued each year, of which 85 percent go to Chinese nationals, the Washington Post quoted federal data compiled by Invest in the USA, an EB-5 trade association, as saying. Vietnam, India, Brazil, Taiwan, South Korea, Iran and Venezuela follow as the next-largest contributors.