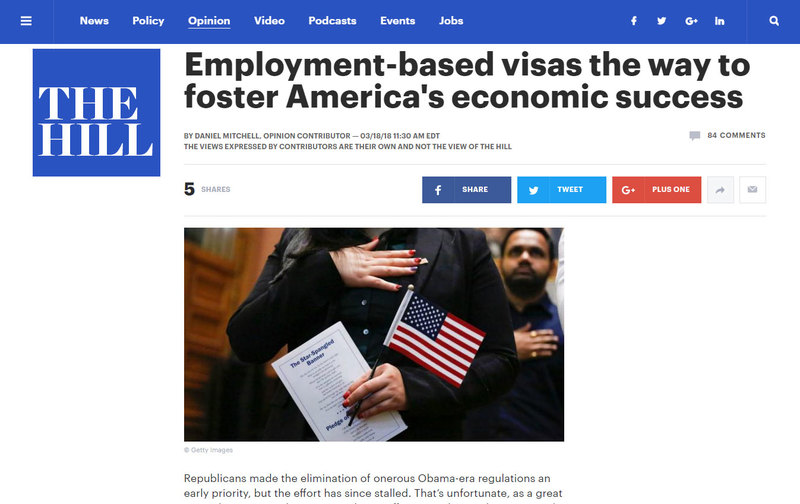 Republicans made the elimination of onerous Obama-era regulations an early priority, but the effort has since stalled. That’s unfortunate, as a great many destructive rules remain either in effect or in the pipeline. One such proposed regulation, an effort to sabotage the EB-5 investor program, ought to be addressed in any upcoming immigration package produced by Congress.

While it is true that the overall issue of immigration is contentious, there are some areas where consensus should be possible. Especially if a there are immigrants who unambiguously would increase per-capita prosperity in America.

And that’s why the EB-5 issue is important. For background, EB stands for employment-based, and the EB-5 visas are for immigrants willing to invest at least $1 million, or $500,000 in certain circumstances, in a U.S.-based commercial enterprise to be eligible for lawful permanent residence in the U.S.

For all intents and purposes, it’s a way of bringing job creators to America.

Over the years this program has attracted significant foreign investment to the United States. The $20 billion in investment attributed to EB-5 visas is credited with creating over 174,000 jobs, or about 16 per investor, according to a Department of Commerce report.

Unfortunately, the Obama administration took a shot at the program on its way out the door. In a “midnight regulation” proposed on Jan. 13, the Department of Homeland Security’s U.S. Citizenship and Immigration Services sought to raise the eligibility requirements and enact other changes to the program.

There’s ample room to discuss reforms to the EB-5 program. For instance, family members of investors are currently counted against the 10,000 cap on program participants even though Congress did not intend for employment-based green cards to work in this fashion. Given the tremendous value of the program, the cap itself also is far too low. Further safeguards are also needed to prevent cronyism and abuse of the program by politicians.

But these are properly questions for the legislative body, which is where reforms to the program ought to be decided. Unfortunately, the Trump administration’s DHS has not opted as of yet to withdraw the rule despite a request from last year from several Senators. The lawmakers argued that raising eligibility requirements “will likely undermine the program’s functionality.”

The bottom line is that the EB-5 program ought to be a slam-dunk. It attracts people who will create jobs and can’t possibly be considered a burden on taxpayers by ending up on the welfare rolls.

One might wonder why upper-income people would want to come to America, but there are good reasons for doing so. Some want to escape excessive taxation, such as from France or Italy, while others look to flee from unstable regimes or where the rule of law is weaker, like China or India.

Whatever their reasons may be, the U.S. would be foolish not to take them. If we’re going to have a system where lawmakers are picking and choosing who to let in the country — which is the case for anything less than full open borders — why not make it a priority to have successful investors?

If rich people didn’t want to come to America, then that would be a worrisome sign. But, for the time being at least, many do. Many other nations, however, also recognize the value in attracting investors and have “economic citizenship” programs designed to do just that.

To remain competitive in the fight to attract economically successful migrants, not only should Obama-era regulations seeking to limit the EB-5 program be withdrawn, but it would be wise for a DACA or broader immigration package to also simplify the EB-5 program and raise the cap.

Daniel J. Mitchell is the chairman of the Center for Freedom and Prosperity, a nonprofit group advocating for limited government in Washington, D.C.