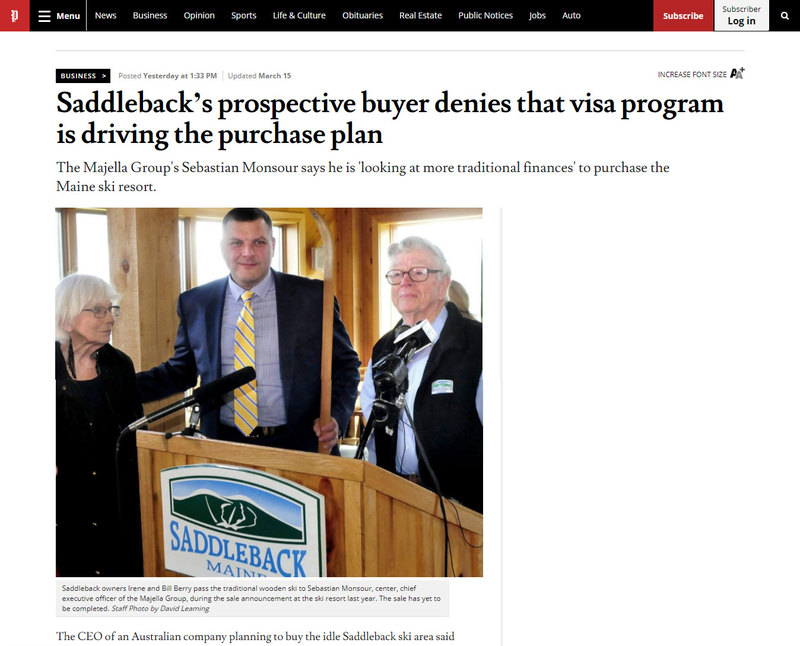 The Majella Group's Sebastian Monsour says he is 'looking at more traditional finances' to purchase the Maine ski resort.

Saddleback owners Irene and Bill Berry pass the traditional wooden ski to Sebastian Monsour, center, chief executive officer of the Majella Group, during the sale announcement at the ski resort last year. The sale has yet to be completed. Staff Photo by David Leaming
The CEO of an Australian company planning to buy the idle Saddleback ski area said Thursday the controversial foreign investor visa program is not key to his plans to finance the deal.

“The EB-5 program has got nothing to do with purchasing the property and nothing to do with getting the mountain back up and running,” said Sebastian Monsour of the Majella Group. “It was meant to be something we were looking into because we have an extensive network globally, but I can tell you now we are looking at more traditional financing.”

The EB-5 program provides foreign investors with an expedited process to secure visas to live and work in the United States if they give at least $500,000 to a qualified project. The program, administered by the U.S. Citizenship and Immigration Services, has been promoted as a way to infuse American projects with cash and to create jobs, but it’s also been the subject of abuse. In some cases, developers pocketed foreign investors’ money without completing a project, leaving them without their money or a visa.

An audio tape released Tuesday of a Majella staff meeting in September featured Monsour saying that opening the ski area “is not a primary concern for us. Getting Saddleback is. The EB-5 program is the reason we are actually buying Saddleback.”

Monsour said Thursday his comments in the recording were part of a larger discussion on financial models and were taken out of context in media reports. He said much has happened in putting together a business plan to purchase and redevelop the resort since then.

Saddleback ski area has been closed since owners Bill and Irene Berry announced they were looking for a buyer in July 2015. Last June, they announced a deal with the Majella Group, but the sale has yet to be completed.

Monsour said he is confident the investors he has approached to help finance the purchase and redevelopment of the Rangeley ski area and the 6,337 acres around it will find it a viable and sustainable project – and that a decision from those investors and “large international banks” is “imminent.”

Monsour said he has spent “in excess of $2 million” on a deposit with the Berrys to enter into a contract agreement and on research for a business plan to give to investors.

“We wouldn’t have spent this much money on planning it if we didn’t think it could work,” Monsour said. “Our focus now is to get the deal done and get the mountain open. That’s our focus, not the EB-5 program. The EB-5 program has not had the best profile of late. It’s not a popular thing to do. If we do use it, it won’t be a primary source of funding.”

An EB-5 visa program offered through the Maine Department of Economic and Community Development won approval to be a regional center in the past year.

Monsour said he is at the last stage of closing a deal with the Berrys and a sale should happen soon. He added he has plans to put in several new ski lifts and new recreational and residential facilities.

He said the research done for the business model has been given to the investors and he is waiting for them to review it.