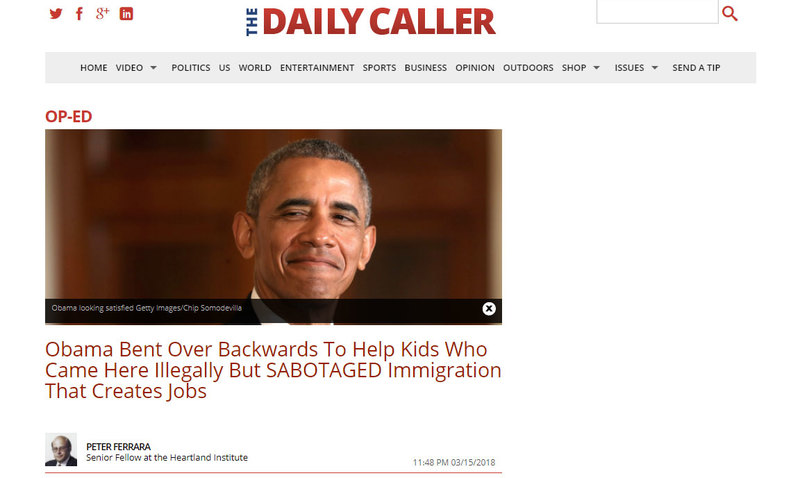 We have been hearing laments about the need to “fix our broken immigration system” for years now, like a broken record. Nevertheless, Congress to this day remains stuck in an impasse.

Republicans as well as Democrats agree that the “dreamers” who were brought to America as children by their illegal immigrant parents, and grew up in America identifying as Americans, have a sympathetic case for more relaxed immigration rules. Many, perhaps most, of these dreamers have grown up and settled in with their own American families now, and know no other country as home.

They speak English and many don’t even know the foreign language of their parents’ original home countries. They work, support their families, pay taxes, and are very law abiding.

President Barack Obama, with his pen and his phone, simply declared that he would not enforce American immigration law against about 600,000 of these dreamers, who never came to America legally in the first place, with no action by Congress to change the law. This came to be known as “Deferred Action for Childhood Arrivals (DACA).”

The Obama administration did not have the same feelings towards immigrants who want to bring jobs and investment into the United States. In the last days of President Obama’s tenure, he pushed out a regulation that sought to sabotage the EB-5 investor visa program. On January 13, 2017, the Obama Department of Homeland Security published a notice of proposed rulemaking that hiked the investment levels for EB-5 visas. On June 29, 2017, Sens. Dean Heller (R-NV), Rand Paul (R-KY), John Cornyn (R-TX) and Thom Tillis (R-NC) wrote a letter requesting the end to this rulemaking and asserting the power of Congress to reform and improve this important program.

President Obama was willing to bend over backwards to help those kids who came here illegally, yet he used the power of the pen to sabotage a legal program that has created jobs and investment in the United States. Encouraging “business migration” to America will bring capital investment, the foundation for more jobs and higher wages, with them. It is clear that President Obama was hostile to the idea of bringing in immigrants who wanted to invest money in the United States, because of his class warfare mentality. President Donald Trump wants to make America great again, and removing the Obama regulation would help make that a reality.

Currently under the “EB-5 visa program,” 10,000 permanent resident visas each year are allocated to immigrants who will invest at least $1 million in a business venture brought to the U.S. offering at least 10 jobs that can be filled by domestic U.S. citizens. Instead of foreign immigrant workers coming to America to compete for jobs against American workers, the EB-5 visa program creates new jobs for American workers, and the capital investment that supports those jobs and the productivity improving equipment that finances higher wages.

American Action Forum (AAF) reports that through these EB-5 immigrants, $20 billion has been invested in the U.S. since 2008, over $5 billion last year alone. These investments have created 174,000 jobs, 16 jobs per each EB-5 immigrant investor.

Anti-business President Obama tried to raise the required investment minimums for EB-5 through the regulation, which would discourage even million dollar investors from participating in the program. He also proposed tightening reporting requirements for EB-5 investors, burdening and discouraging such investment.

But rather than restricting EB-5, President Trump should expand it, for more jobs, capital investment, and higher wages. AAF estimates that increasing investor visas to 20,000 a year would increase U.S. GDP by $11 billion annually. Ending the Visa lottery program would free up 50,000 visas a year that could be devoted to the EB-5 investor program, increasing capital investment, jobs, and higher wages for American workers. Even more could come from ending chain migration.