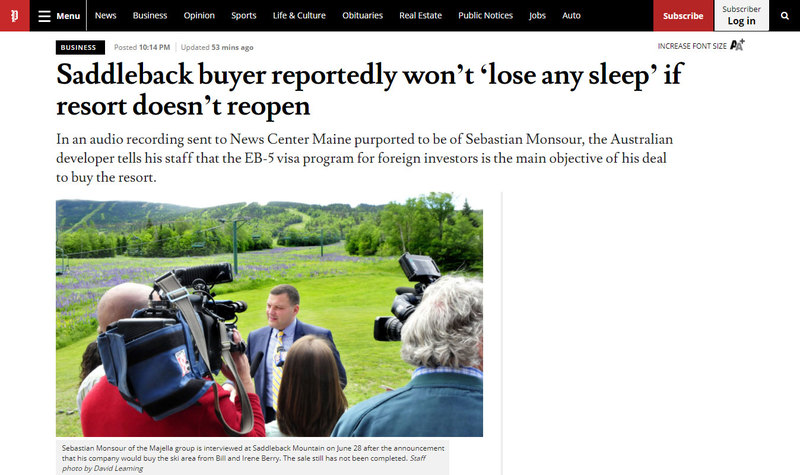 In an audio recording sent to News Center Maine purported to be of Sebastian Monsour, the Australian developer tells his staff that the EB-5 visa program for foreign investors is the main objective of his deal to buy the resort.

Sebastian Monsour of the Majella group is interviewed at Saddleback Mountain on June 28 after the announcement that his company would buy the ski area from Bill and Irene Berry. The sale still has not been completed.

The Australian developer who has entered into an agreement to buy Saddleback Mountain has reportedly told members of his staff that opening the mountain is not a primary goal for his company and the EB-5 visa program that gives foreign investors permanent residency is the reason his company is buying the idle ski resort.

That’s according to a purported audio recording of Sebastian Monsour sent to News Center Maine by a former employee of the Majella Group of Brisbane, Australia.

“The EB-5 program is the reason we are actually buying Saddleback,” Monsour tells the group at a meeting in September 2017. “The mountain and opening the mountain is something we would like to achieve, but if we don’t, we are not going to lose any sleep with regards to it.”

Monsour had promised change after three ski seasons of idle lifts and decreased tourism in Rangeley. On June 28, at a news conference to announce his company’s intent to buy the idle ski resort, he told the crowd that he planned to make Saddleback Mountain “the premier ski resort in North America.”

The EB-5 is the government’s immigration investor program that lets foreign investors get permanent residency in the United States. In rural areas like Rangeley, if you invest at least $500,000 in a business that creates 10 U.S. jobs, you and your family become eligible for green cards.

Other investors can chip in, too – with the same guidelines – a $500,000 investment and 10 more jobs – and they and their families are eligible for green cards as well.