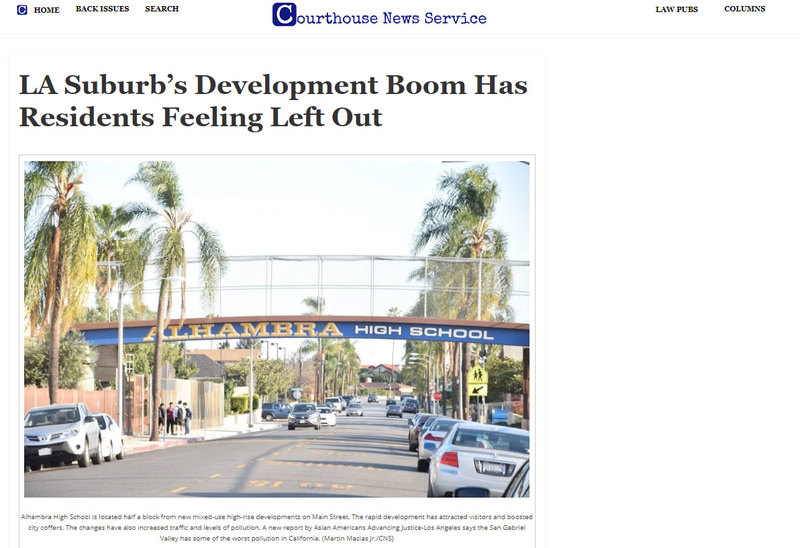 Alhambra High School is located half a block from new mixed-use high-rise developments on Main Street. The rapid development has attracted visitors and boosted city coffers. The changes have also increased traffic and levels of pollution. A new report by Asian Americans Advancing Justice-Los Angeles says the San Gabriel Valley has some of the worst pollution in California.

Johnny Lam likes to ride his bike around Alhambra, but often has to dodge cars while navigating the city’s poor biking infrastructure. It wasn’t always that way. Lam, 41, grew up in Alhambra and recently returned to live there, and says the landscape has completely changed.

“I liked old-style Alhambra. There was more open land and spaces for the community to gather,” he said. “Now it feels more like a concrete jungle.”

Lam, a digital media entrepreneur, was born in Vietnam to ethnically Chinese parents. He said he enjoys the new developments in Alhambra but has concerns about the direction developers and city officials are going.

“You are seeing more development here and perhaps, in long run, even more growth,” he said. “But it doesn’t seem like they’re building for a purpose.”

Lam’s experience as a returning resident exemplifies the tension some Alhambra residents feel over the city’s transformation. It remains a family-oriented community that offers some respite for people fleeing congestion and high rent in Los Angeles.

New restaurants, bars, theaters and mixed-use condominiums sprouting up along Main Street bring tax revenue for city coffers but also increase traffic and pollution. With November elections on the horizon, new development has fomented a movement of residents calling for transparency and inclusion.

Located in the western sector of the San Gabriel Valley, Alhambra entices visitors who often come to enjoy authentic cuisine that draws from local Asian communities and their respective culinary practices. The region is comprised of half a million people of Asian, Pacific Islander, and Native Hawaiian descent, more than in 42 states. Alhambra hosts the largest number of Asian-Americans in the San Gabriel Valley.

Giang cited a new report by her group that found a third of Asian-Americans are low-income.  Many work in service industry jobs for pay that is the lowest in the region. Communities also deal with tremendous pressure from surging housing costs.

According to the report, almost 70,000 Asian-Americans spend 30 percent of their income or more on housing costs. Alhambra has seen some of the sharpest spikes in housing costs.

Ashley Yu, a 26-year-old lifelong resident of the valley, has seen the impact on communities firsthand.

She said she notices on a daily basis the development projects funded with money invested by “new money immigrants” from China and East Asia.

Many of these projects in the valley are funded by people with EB-5 visas. Initiated through the Immigration Act of 1990, EB-5 visas provide a pathway for eligible immigrant investors to become lawful permanent residents by making capital investments that create a minimum number of jobs in an area.

According to the U.S Citizenship and Immigration Services website, the minimum qualifying investment in the United States is $1 million.

“Rent goes up and pushes out lower-income folks,” Yu said. “Compared to immigrants who came as refugees, recent arrivals are more cash-rich.”

Marissa Martinez, 30, said she also sees the impact of new development on local residents. Her family owns a home in the neighborhood. Martinez said the city pressures homeowners to maintain their homes or receive fines.

Martinez said she remembers when the community was very welcoming and still considered an affordable place to live. Places where teenagers and young parents would hang out now cater to crowds that enjoy going to bars and new restaurants.

“This type of gentrification doesn’t feel or look the same as in Highland Park or other places,” she said. “We don’t see the hipster culture, the coffee shops or galleries. It’s more corporate chains moving in.”

In terms of infrastructure and political developments in Alhambra, Giang says many residents are left out of the civic engagement process.

Language and cultural barriers present serious challenges for nearly half the population of Asian-Americans who are not proficient in English, she said. Engagement challenges are compounded for the roughly 58,000 undocumented Asian-Americans in the region.

Thomas Wong, board president of the San Gabriel Valley Municipal Water District, said many residents may not have the time to participate in local politics. But community leaders have to engage them proactively, he said, and there aren’t many organizations doing so.

Wong said the region lacks the number of influential nonprofits and local advocacy organizations that are found in other cities like Los Angeles.

“There’s poverty throughout the region but it’s not as visible,” he said. “We, in government, have to figure out ways to engage people, not have them feeling excluded.” 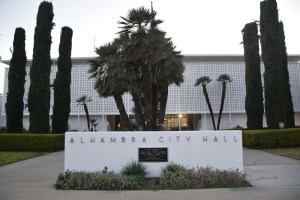 The Alhambra City Council will feature five new members after elections in November.

This year’s election may be a chance to infuse collaboration and transparency in the development process. Three of the five City Council seats are up for election this November. Alhambra residents can weigh in on how to balance concerns from those who have been upset with how the city has changed and those who are comfortable with the pace and scale of growth, Wong said.

“Development is not an entirely bad thing,” he said. “The challenge is to figure out ways to leverage benefits from growth to help residents in a responsive way.”

The neighborhood activists sued Alhambra, concerned a new Lowes would increase traffic in the area and that construction would take place on a potentially contaminated former industrial site. Lowes eventually backed out of the project.

The report by Giang’s group also says the San Gabriel Valley is home to some of the most polluted parts of California. Giang said toxic chemicals released from industrial facilities, drinking water contamination, and exhaust from traffic along freeway corridors present major challenges.

Growing up in Alhambra, Lam said it was common to receive alerts about toxic levels of smog. He currently participates in a program called PurpleAir by which he installed a small air-quality sensor in his home.

The program was initiated in the area by API Forward movement, an Asian and Pacific Islander health advocacy organization.

Lam said he sees throngs of people coming to Alhambra for shopping and to enjoy the plentiful eating options. He said the changes are likely good for small businesses but also create other challenges for residents, like pollution from increased traffic.

“The landscape has changed,” he said. “I’m not sure yet if that will be negative or positive.”