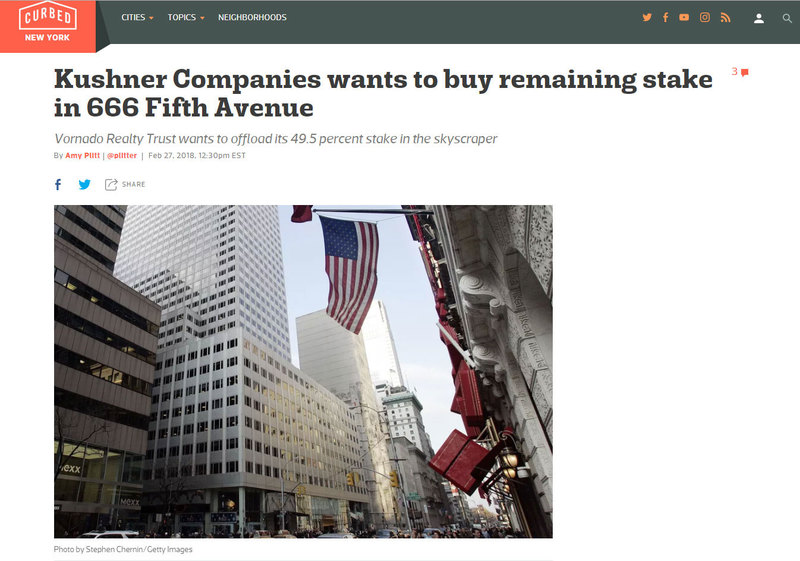 Vornado Realty Trust wants to offload its 49.5 percent stake in the skyscraper

There may be an end in sight for the saga of 666 Fifth Avenue, which went from being the most expensive office building ever purchased to an extraordinarily expensive boondoggle in just about a decade. Vornado Realty Trust, which owns a 49.5 percent stake in the building, has made it clear that it wants to sell its share, and according to the Wall Street Journal, there’s at least one interested party: Kushner Companies.

The firm is in talks with Vornado regarding that 49.5 percent stake, which the latter has reportedly been looking to offload for some time now. And as the WSJ notes, if Vornado is serious about selling its share in the building, Kushner is “the most obvious buyer” for one simple reason: “others might be reluctant to get involved in one of most closely scrutinized buildings in the world.”

Previously, Kushner Companies had floated redevelopment plans for the building that would have seen it transformed into a Zaha Hadid-designed supertall with both luxury condos and a hotel. But Vornado was never on board with that plan; those conflicting interests, paired with the fact that 666 Fifth has been losing money since the Kushners acquired it, led the company’s founder and CEO Steve Roth to a “sharp reversal” which included advising potential investors to back off.

It’s unclear what would happen if Kushner did acquire Vornado’s stake in the building; as the WSJ notes, “the family may face difficulty moving ahead with a redevelopment of the scale of last year’s plan partly because it has opted to shut itself off from major capital sources.” Those include funding from foreign governments, and wooing investors through the use of the EB-5 visa program; Kushner has come under scrutiny for both in the wake of its former CEO, Jared Kushner, taking a role in the Trump White House.

One thing is clear, though: The $1.2 billion mortgage on the building is due early next year, and Kushner has yet to begin repaying it.