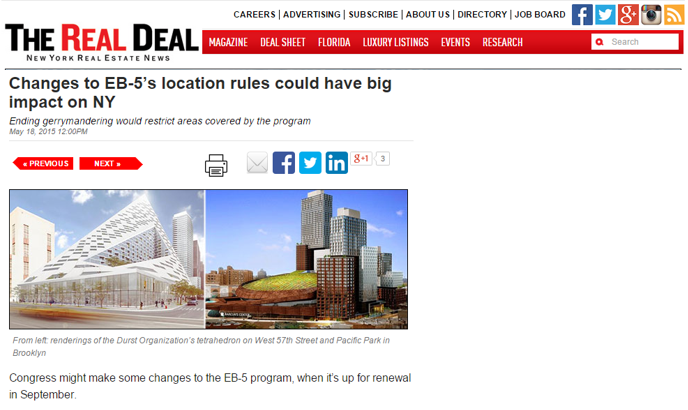 Congress might make some changes to the EB-5 program, when it’s up for renewal in September. In New York, this could mean that real estate projects that are developed with the help of the visa program would have to be built in low-income areas. Foreign investors who spend $500,000, or sometimes $1 million, in a project that creates at least 10 jobs can then apply for a green card and receive one quicker than through traditional channels, according to the New York Times. The China-based Greenland Group, for example, is co-developing Pacific Park in Downtown Brooklyn with Forest City Ratner. The Durst Organization’s tetrahedron at 625 West 57th Street is also sponsored by EB-5. Under the program, projects that are supported by EB-5 investments need to be in areas with high unemployment. Many of the developments, however, are in wealthy areas of the city such as Midtown, Chelsea and Tribeca, the Times reported.

The use of contiguous census tracts — as Greenland did by using the nearby Crown Heights and Bedford-Stuyvesant to invest in Pacific Park — could also be curtailed, according to the newspaper. Barely any neighborhoods in Manhattan have unemployment rates that are high enough for an EB-5 project.

Parts of the program are up for renewal in September and Congress is expected to address other concerns as well, such as the rapid pace at which the 10,000 available visas are snatched up. In 2014, all of the annually 10,000 available EB-5 visas were claimed by August. In 2010, only 1,885 EB-5 visas were issued. By 2013, that number went up to 8,564, the newspaper reported. This year’s quota was reached by May 1.