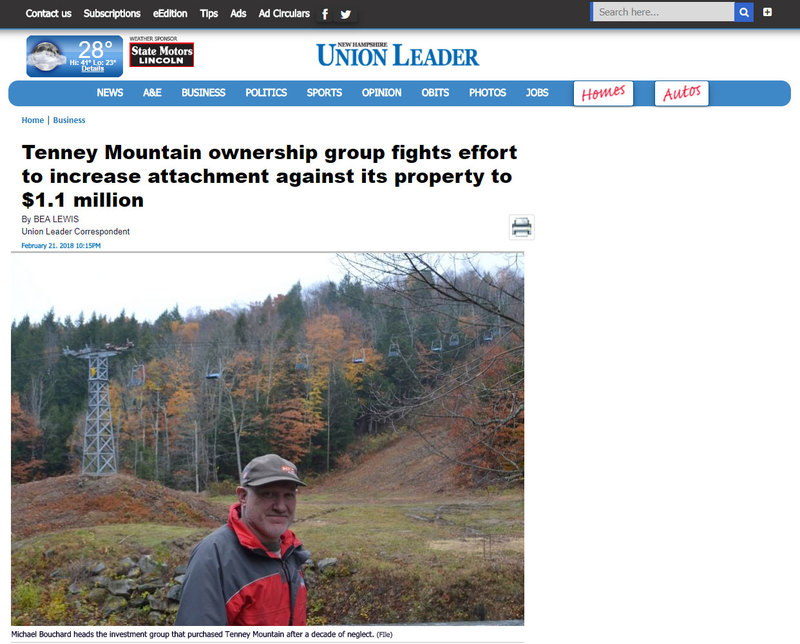 Michael Bouchard heads the investment group that purchased Tenney Mountain after a decade of neglect.

The investment group that owns Tenney Mountain ski area in Plymouth that reopened unannounced last week remains embroiled in a legal battle and is contesting efforts to increase the existing attachment against the property from $375,000 to $1.1 million.

In March 2016, Keith Fitzgerald of Center Harbor filed a lawsuit in Belknap County Superior Court against Tenney Mountain Development Group LLC, seeking to recover for equipment, tools and construction materials he claims the ski area kept when they fired him.

Michael Bouchard, the New Hampshire businessman who heads the investment group that purchased the mountain after a decade of neglect, filed a countersuit claiming he was duped into giving money to Fitzgerald for services never delivered.

Fitzgerald claims he was hired by TMDG as chief operating officer to oversee the redevelopment and expansion of the ski area that closed in 2010 after years of financial trouble under a series of different owners.

As part of that work, he supplied equipment, and the agreement between the parties was that he would be paid for his tractor, zero-turn mower and other tools when it was used as part of the project.

Previously, a judge granted Fitzgerald an attachment against TMDG’s real estate pending resolution of the dispute, and he is now asking that amount be more than tripled, claiming that it is warranted to ensure there are sufficient assets to satisfy the judgment given the recent purchases of equipment and other investments TMDG has made.

Attorney James Laura, who represents TMDG, argues that it is Fitzgerald who needs to provide security for a potential judgment, noting that he is free after posting $410,000 cash bail, after he appealed his conviction for stealing $400,000 from his terminally ill father, and was ordered to repay that amount to the estate.

Laura has asked the court to schedule a hearing to determine the source of Fitzgerald’s bail funds “to ensure he has not depleted available assets that would hinder payment of judgment against him.”

In his counterclaim, Boucher claims Fitzgerald agreed to use his company, Golden Gate Investment Advisers LLC, to secure EB-5 funding and make TMDG a regional center for all other EB-5 activities.

In 1990, Congress approved a pilot program, EB-5, designed to stimulate the economy and job growth by giving foreign nationals the chance to become permanent legal residents if they invested at least $500,000 in a high unemployment or rural area.

According to Bouchard’s court filings, Fitzgerald asked for a $58,333.33 deposit to start work on securing EB-5 financing and making TMDG a regional center.

In May and June of 2015, Bouchard asserts he made two payments to Fitzgerald totaling $30,000 and that Fitzgerald contacted lawyers Bouchard had retained to draft the needed legal documents, convincing them to keep their retainers, which he then pocketed.

A judge has previously ordered that Fitzgerald is entitled to the return of a tractor, a vintage Jeep and other equipment, tools and construction materials that remain at Tenney Mountain, ruling the defendant has failed to prove a valid security interest.

Most recently, the defendant’s lawyer filed a motion asking the court to order Fitzgerald to show cause as to why he failed to appear at a Jan. 11 final pretrial hearing, claiming Fitzgerald has demonstrated a pattern of conduct of trying to manipulate the system in his favor by purposely causing delays.

Fitzgerald denies the allegations and claims he was under the impression that after his then-lawyer Robert Hunt informed him he was withdrawing, that the hearing had been or would be cancelled.

As to missing a prior hearing, Fitzgerald recounted that he was imprisoned and that the Department of Corrections had failed to process his transportation order. He was a no-show for another hearing, Fitzgerald said, because he had been “beaten unconscious while in custody and sustained a serious concussion.”

Attorney Jonathan McPhee of Portsmouth is now representing Fitzgerald and the judge has directed that a hearing be scheduled in 30 days.