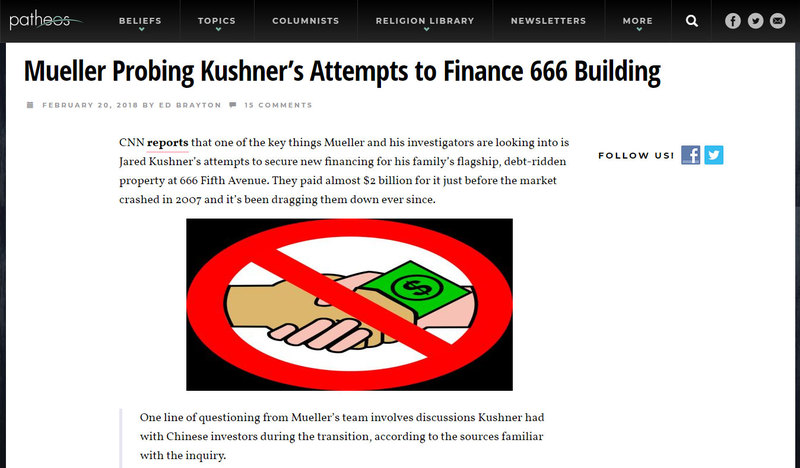 CNN reports that one of the key things Mueller and his investigators are looking into is Jared Kushner’s attempts to secure new financing for his family’s flagship, debt-ridden property at 666 Fifth Avenue. They paid almost $2 billion for it just before the market crashed in 2007 and it’s been dragging them down ever since.

One line of questioning from Mueller’s team involves discussions Kushner had with Chinese investors during the transition, according to the sources familiar with the inquiry.

A week after Trump’s election, Kushner met with the chairman and other executives of Anbang Insurance, the Chinese conglomerate that also owns the Waldorf Astoria hotel in New York, according to The New York Times.

At the time, Kushner and Anbang’s chairman, Wu Xiaohui, were close to finishing a deal for the Chinese insurer to invest in the flagship Kushner Companies property, 666 Fifth Avenue. Talks between the two companies collapsed in March, according to the Times.

Mueller’s team has also asked about Kushner’s dealings with a Qatari investor regarding the same property, according to one of the sources. Kushner and his company were negotiating for financing from a prominent Qatari investor, former prime minister Hamad bin Jassim Al Thani, according to The Intercept. But as with Anbang, these efforts stalled.

You may recall that early last year, the Kushner family was holding very public meetings in China telling potential investors that if they were to spend $500,000 in American investments, they could emigrate to the United States — and they’d better hurry, because the Trump administration, led by their scion, might soon change the visa rules and they’d be locked out. Those presentations were made by Jared’s sister, Nicole Kushner Meyer, who was billed in promotional materials as his sister. This was a rather ham-handed attempt to cash in on his status as Trump’s Boy Wonder in the White House.

Put in your application, plunk down some cash, the message was, and our family will make sure you get approved. And they had a history of doing this before taking power as well. The program is called the EB-5 Visa Program and Jared used it to get $50 million worth of investment prior to the 2016 election for a Trump-financed project in New Jersey, most of it from Chinese investors. The corruption stinks to high heaven.

I’ve said all along that this is what Trump and those closest to him are most likely to be nailed for by Mueller. It’s the financial corruption that will catch them, along with obstruction of justice.