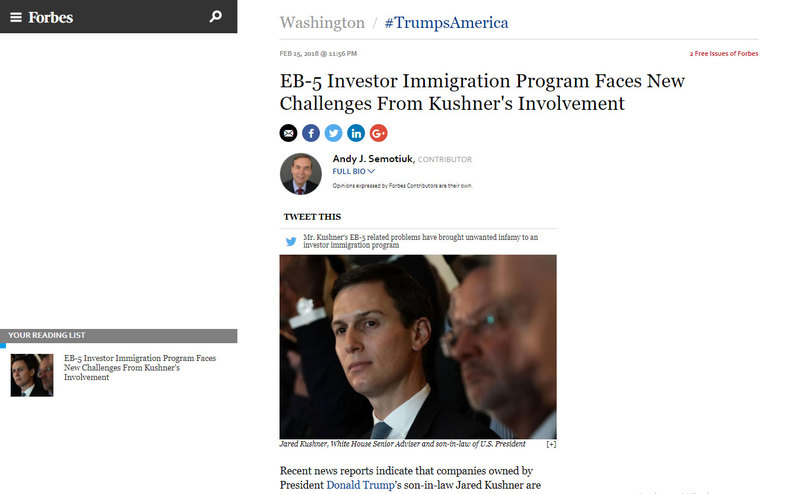 Recent news reports indicate that companies owned by President Donald Trump’s son-in-law Jared Kushner are under investigation. The U.S. Securities and Exchange Commission is looking into their attempts to line up investor money from Chinese investors by presenting their New Jersey real estate projects as EB-5 visa investments. What is more, U.S. tax authorities have requested documents from lenders and investors in real estate projects managed by Jared Kushner’s family. Mr. Kushner has already been linked to  Special Counsel Robert Mueller's investigation into Russian election meddling. In short, Kushner is increasingly under fire and appears to be the target of multiple investigations. Nowhere are these developments more troubling, however, than in the EB-5 investor immigration world.

Mr. Kushner's EB-5 related problems have brought unwanted infamy to an investor immigration program that has already had its share of problems. Earlier this year the Lucky Dragon Hotel project in Las Vegas involving Chinese EB5 investor immigrants closed down. It was reported that 60 investors stood to lose $ 500,000 each as well as legal fees they paid while not getting their green cards. For some time now Chinese investors have increasingly been losing interest in the program because of the more than 10 year wait times required, the uncertainty associated with its renewals, and new Chinese restrictions on the outflow of capital from the country.

In articles I previously wrote I looked at practical alternatives to the EB-5 program. In the first article I compared the EB-5 program to the E-2 work visa program, suggesting the E-2 visa is preferable. In that article I even suggested how a Chinese investor who normally could not qualify for an E-2 because China does not have an investment treaty with the USA, could qualify to obtain an E-2 visa by becoming a citizen of Grenada. In the second article, I suggested that for those Chinese investors who had an existing business in China, and investors in other countries who may not qualify under the E-2 visa, the EB-1C program is better.

The extent to which a new immigrant is exposed to U.S. taxation is:

To summarize, the EB-5 program has endured a lot of trouble in recent years. Apart from some losses by EB5 investors, Chinese long waiting times, uncertainty associated with the program's renewals and Chinese restrictions on the outflow of capital, two new challenges have entered the picture.
One is the problem created by Jared Kushner's use of the EB5 program to raise money in China for his New Jersey real estate projects. This has not helped strengthen the program's image nor boosted investor confidence in it, particularly because he is related to the President yet under investigation.
The other is the new tax realities facing EB5 permanent residents in America, particularly when viewed through President Trump's new tax act.
The point of this article is that by resorting to the E-2 visa, or even the L-1 inter-corporate transferee visa when the investor owns a company overseas, investors can avoid a lot of the problems outlined. As the Eb-5 program faces increasing scrutiny, these alternate investor programs appear to be better options for many investors.