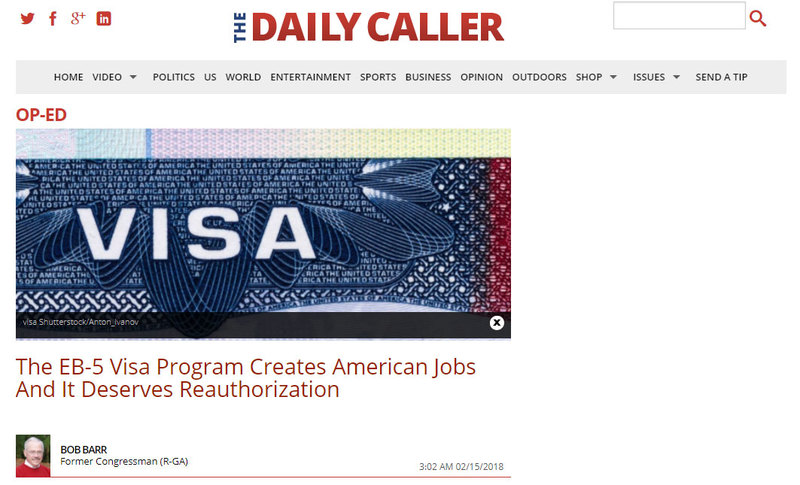 Every once in a while — some would say in a long, long while — the federal government comes up with a good idea. For my Baby Boomer generation, many would say the Apollo Space Program merits such classification. More recently, though on a much smaller scale, airline travelers might suggest the TSA Precheck Program and its Global Entry cousin are examples of successful and timely government initiatives.

In the category of immigration, examples of “good” government programs arguably are among the rarest of all. There is, however, one program that, over the course of its quarter century existence, has delivered consistently on its promise of bringing lawful immigrants to our shores as investors and job creators: the EB-5 visa program (“EB-5” is shorthand for the fifth category of employment-based immigrant visas). The EB-5 program exemplifies the focused, vetted and merit-based immigration policy which President Donald Trump repeatedly has endorsed; most recently in his State of the Union speech last month.

Those waiting for the perfect government program will be forever doomed to disappointment; and the EB-5 visa program is no exception. Despite its flaws, however, the program on balance possesses an indisputable track record of accomplishing its goals; among which are producing some $20 billion in investments in the United States just since the great recession rolled across the country in 2008, and creating more than 174,000 jobs. Some estimates peg the cumulative economic effects of EB-5 based investments, just in terms of tax revenues generated for federal, state and local governments, to be in the hundreds of millions of dollars

Perhaps as important as what the EB-5 program has done in terms of investments and job creation, is what it has not done. The program, by its very nature of using foreign investment to create jobs here in America, has not taken a single job from a United States citizen; it is conducted at no cost to American taxpayers; and it makes far more sense than an arbitrary visa lottery plan.

Moreover, and consistent with one of Trump’s top priorities for immigration reform, the EB-5 program does not lead to or allow for “chain migration.” Also in accord with the President’s immigration priorities, individuals applying for EB-5 visas are thoroughly vetted by the Department of Homeland Security, which is responsible for overseeing the program through its component agency, the U. S. Citizenship and Immigration Services (USCIS).

Those investors approved for admission via the EB-5 program are as a whole far better educated than most applicants for other visa benefits, and certainly for those who enter indirectly via chain migration. In this respect, the program comes far closer to the President’s preferred, “merit-based” immigration initiative than most others.

The program is able to achieve these goals by virtue of the legislation through which it was first established in 1990, and strengthened two years later. Applicants for EB-5 visas — limited to 10,000 per year — must themselves invest at least $1.0 million in a business in the United States, or half that amount ($500,000) in a designated “Targeted Employment Area” (TEA); so designated by virtue of high unemployment or being in a rural area. Additionally, each such investment must protect or create at least 10 jobs.

The EB-5 program was largely under-utilized until the recession hit in 2007-2008. It was then that many economists and the federal government recognized that the lack of domestic investment into real estate projects across the country, magnified the EB-5 program’s benefits of bringing in foreign investors to buttress the decimated real estate market. The plan worked, and investment through the program increased dramatically.

While in recent years the vast majority of EB-5 investors have come from mainland China, the most recent statistical information from the U.S. State Department shows a significant broadening of the countries from which EM-5 applicants hail. The area with the largest increase in EB-5 applicants in just the last year is South America, with Brazil leading the way.

Reauthorized repeatedly since its inception in 1990, the EB-5 program currently is again under consideration. The program works. It meets every positive criteria the administration has laid out for immigration reform. Reauthorizing and expanding the EB-5 visa program must be part and parcel of any DACA legislation or other immigration-focused legislation. Failure to do so should not be an option.