Why Congress must reform immigration 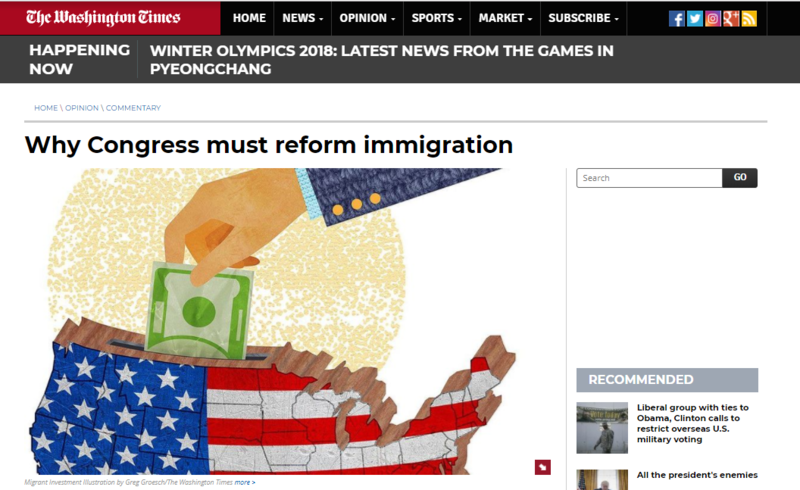 If President Trump is serious about wanting to shape immigration policy to be part of his plan to make American great again, there is at least one category of immigrant he should urge Congress to expand — the EB-5 visa program.

The EB-5 program, first authorized in 1990 but put into its present form in 1992, allows in 10,000 people per year on the condition they invest at least $1 million in a U.S. business — or $500,000 if in an economically depressed area — to be used to create at least 10 full-time positions. Investors can go it alone, invest in an existing business or enter partnerships with other immigrants using the same exemption.

The requirements are stringent. In addition to the significant investment in our economy, EB-5 requires both the investor and the project to be vetted by multiple federal agencies. Those who pass muster receive only a 2-year conditional status visa, after which the investor and the project are again assessed. Only then can investors apply to become permanent U.S. residents.

These requirements ensure only serious investors and their families can take advantage.

The program was virtually ignored for years until the economic recession of 2007 sent companies and communities in desperate need of alternate financing.

Those jobs are where they are needed most. The government estimates 99 percent of EB-5 visa holders invest at the lower amount because they are sinking money and jobs into America’s most downtrodden communities. They’re developing downtrodden real estate, investing in hospitals and infrastructure projects and manufacturing concerns. They’re not competing for jobs Americans need; they’re creating them.

Legislation before the Senate provides some new energy for the program. The Immigration Innovation Act of 2018, introduced by Sen. Orrin Hatch, Utah Republican, would temporarily reauthorize the EB-5 Regional Center Program.

But more reforms are needed. The program needs to be modernized, systemized and finalized. It has operated on short-term extensions in recent years, but a program that provides visas in exchange for investments clearly needs more certainty.

Modernizing procedures would enable immigration authorities to eliminate a backlog of more than 25,000 people — some of whom have waited seven years or longer to get into the U.S. legally. That’s $2 billion-$3 billion, according to the experts, sitting just outside the country waiting — begging — to come in and invest.

These are people who understand how to create wealth and flourishing for not just themselves but others. They can take their investment dollars elsewhere and they will if fail to improve the program.

The contours of an immigration compromise have emerged. The president will agree to let the Dreamers stay in exchange for funding for the wall and an end to the visa lottery and chain migration. The president’s stated goals of these measures are not to keep people out but to put the U.S. in position to choose the immigrants it allows in. If the visa lottery system and chain migration are ended or curbed, those visas could and should be shifted to the EB-5 program. According to the American Action Forum, doubling the program to 20,000 investors would increase GDP by $11 billion per year.

Here is a chance to make the case he is pro-America and not anti-immigrant, pro-business and not anti-economic growth and pro-investment and ideas and eager to bring in people who can help make America great again.

But does Congress understand this? Will it leave this money on the table just across the border? Or will it get serious and make sure bringing in investors is part of any immigration deal?