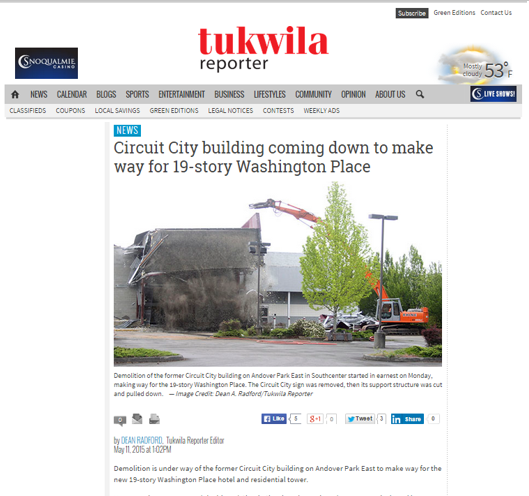 Demolition is under way of the former Circuit City building on Andover Park East to make way for the new 19-story Washington Place hotel and residential tower.

Heavy equipment removed the big red Circuit City sign, then snipped away at vertical steel beams before tearing down the sign's support structure.

The project by developers Omar and Christine Lee is a key part of the City of Tukwila's strategic plans to encourage residential development and mixed uses in its main business district in Southcenter.

The Lees have been residential and commercial developers since 1980. They developed the Great Wall Shopping Mall in Kent that includes restaurants, shops and a grocery store.

The Tukwila City Council will receive a briefing on the development Monday (May 11) at its meeting at 7 p.m. at City Hall.

The developers have asked the city to reduce or defer development fees for the mixed-use development.

The city's Economic Development staff has estimated the developers will pay more than $1.5 million in building and impact fees, according to a staff report. The total construction cost is estimated at $74 million.

Building permit fees are used to review plans and for construction inspections, while impact fees pay for capital projects to offset a development's impacts to traffic, parks and fire services.

City staff is recommending to the City Council that it not reduce or eliminate building or impact fees for the development. To do so would first require a "careful review" to the city's general fund, according to the staff report.

The development staff also questioned whether reducing such fees for one specific project but not others is legal, because it could be a gift of public funds which isn't permitted.

The staff does recommend that the city create a fee-deferral program within the Transit Oriented Development area in the Southcenter District to encourage residential development.

The Lees told the council's Finance and Safety Committee in early May that they will build the hotel but whether they build the residential part – multi-family units that could be converted to condominiums – "hangs in the balance," according to the staff report.

The Lees will finance approximately $60 million of the Washington Place project themselves, according to a news release issued when the Lees broke ground last fall.

The remaining funding will come from the federal EB-5 Visa program, which offers foreign nationals the opportunity to obtain a U.S. green card by investing in a commercial enterprise in the United States.

The city has already made modifications to its development standards for the development related to height, open space, condominiums, signage and residential units.