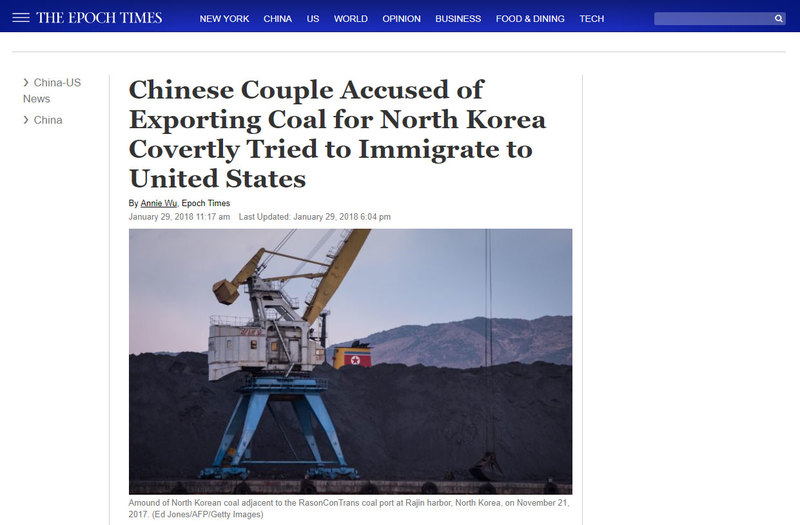 A couple accused of selling coal for North Korea recently attempted to immigrate to the United States under a special visa program for foreign investors who contribute to the U.S. economy.

Back in August 2017, the U.S. attorney’s office filed a complaint to federal court alleging that Chi Yupeng and his wife Zhang Bing had helped North Korea to export and sell coal through their China-based company Dandong Chengtai Trading Co. North Korea has few industries and heavily relies on coal exports to generate revenue—about $1 billion annually—according to the federal attorney’s office.

The company is one of the largest importers of North Korean coal in China, and had wired more than $4 million to a front company called Maison Trading, the complaint alleged. The attorney’s office seized those funds.

At that time, the U.S. Treasury Department also included the company in a list of entities and individuals who aided North Korea’s nuclear weapons program in violation of the United Nations Security Council Resolution. Dandong Chengtai’s sales benefited North Korea’s nuclear program. The company also directly assisted North Korea in purchasing nuclear and missile components, and used a network of companies to engage in bulk purchases, wire transfers, and other transactions for the rogue regime, according to the Treasury Department. 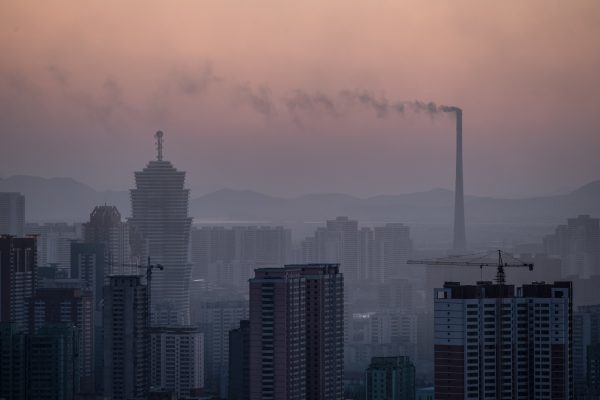 The chimney of a power station amid the Pyongyang city skyline, North Korea, on February 17, 2017.

Via a court complaint filed on Jan. 25, the U.S. Attorney’s Office now alleges that in November 2015, Chi and his wife directed 12 wire transfers by different individuals—a total amount of $568,405—into a bank account in the United States controlled a family member, for the purpose of fulfilling a requirement for the EB-5 visa program.

That program allows eligible foreign investors to become legal permanent residents by investing at least $500,000 to finance a business in an area with high unemployment rate in the United States, that will employ American staff.

The U.S. Attorney’s Office has placed those funds under forfeiture, “as Chi Yupeng and Dandong Chengtai generated millions of dollars of revenue from the illegal sale of North Korean coal that benefitted sanctioned entities in North Korea,” according to a press release.

EB-5 visas are granted to only about 10,000 applicants every year. In recent years, many Chinese investors have immigrated to the United States under this program. According to U.S. State Department statistics, mainland Chinese investors have made up the majority of EB-5 visa recipients since 2011. In fiscal year 2017, they made up 75 percent of those granted with the EB-5, with 7,567 recipients.

The allegations of Chi and his wife’s activities appear to be the first case of sanctioned misconduct while applying to the EB-5 program.