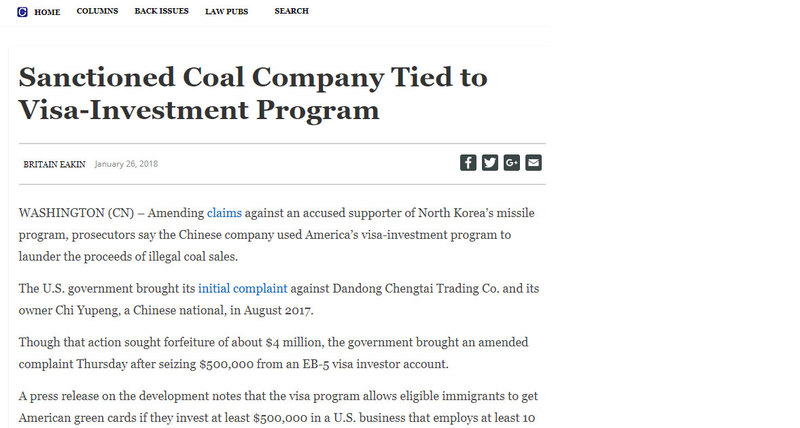 The U.S. government brought its initial complaint against Dandong Chengtai Trading Co. and its owner Chi Yupeng, a Chinese national, in August 2017.

Though that action sought forfeiture of about $4 million, the government brought an amended complaint Thursday after seizing $500,000 from an EB-5 visa investor account.

A press release on the development notes that the visa program allows eligible immigrants to get American green cards if they invest at least $500,000 in a U.S. business that employs at least 10 American workers.

“Once the wire transfers are cleared through the U.S. financial institutions, payments are transmitted to offshore U.S. dollar accounts maintained by front companies on behalf of the foreign financial institutions and the North Korean entities and/or parties from whom the North Korean sanctioned entities are seeking goods,” the 33-page complaint says.

To evade detection by the Treasury Department, the complaint says front companies conceal information that would tie the transactions to North Korea.

According to the new filing, Yupeng and his wife committed wire and bank fraud when they directed 12 wire transfers into a U.S. account controlled by a family member in November 2015.

“These wires ranged in values between approximately $31,335 and $50,000, which the government alleges was part of a scheme to circumvent Chinese capital outflow rules,” a Justice Department press release states. “On Nov. 13, 2015, the same day as the final transfer into the U.S. bank account, Chi Yupeng and his wife caused a wire for $550,100 to be sent to an EB-5 investment program account.”

The Justice Department says the additional funds are subject to forfeiture since the company generated millions from selling North Korean coal that benefitted sanctioned entities in the country.

North Korea generates more than $1 billion in revenue from coal sales, which help funds its military and missile programs. Dandong Chengtai was one of three companies blacklisted in 2017 for producing half of that revenue between 2013 and 2016.

“The designation noted that Dandong Zhicheng sold, supplied, transferred, or purchased coal or metal, directly or indirectly, from North Korea, and that the revenue may have benefitted the nuclear or ballistic missile programs of the Government of North Korea,” the complaint says.