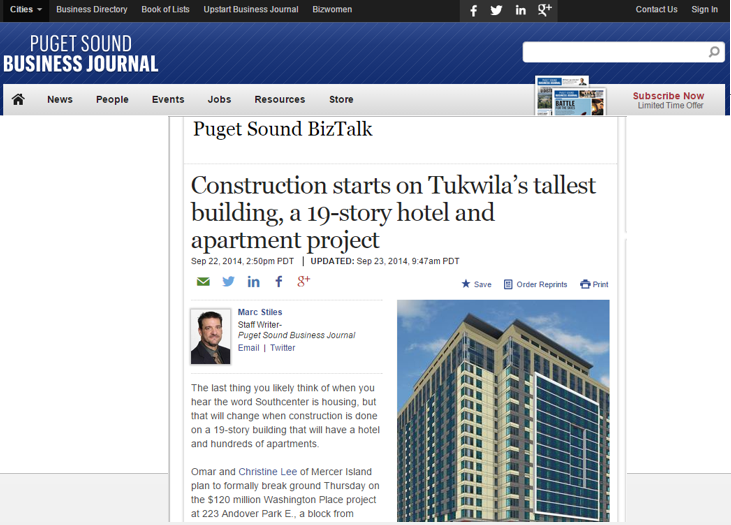 The last thing you likely think of when you hear the word Southcenter is housing, but that will change when construction is done on a 19-story building that will have a hotel and hundreds of apartments. 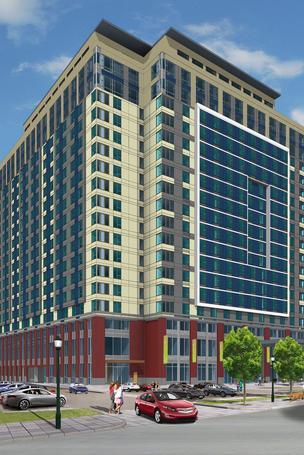 Omar and Christine Lee of Mercer Island plan to formally break ground Thursday on the $120 million Washington Place project at 223 Andover Park E., a block from Westfield Southcenter, the Puget Sound region's largest shopping mall. It will be the tallest tower not just in Tukwila but south of Interstate 90 and north of Tacoma, according to the Lees.

Nearly 20 years ago, regional and county officials designated Southcenter as a "growth center" and urban area. Such centers are supposed to be areas of concentrated employment and housing along with mass transit hubs. Southcenter has plenty of the former but little if any housing. Washington Place will have 370 market-rate apartments as well as a 189-room business hotel with meeting space and a restaurant.

Residents and hotel guests won't need a car, Omar Lee said, noting Washington Place is within walking distance of the mall, a bus transit center that the city is upgrading and a future pedestrian/bicycle bridge that will lead from Southcenter over the Green River to the new Sounder rail and bus station. The city hopes to start building the span next year, the city's Public Works Director Bob Giberson said.

To make way for Washington Place, demolition of the existing structure, an old Circuit City, is planned for late October and the 418,000-square-foot building is scheduled to open in the spring of 2017.

The Lees are financing half of the project with their money and the other half through the EB-5 program, which allows foreign nationals to invest in real estate and other developments that create jobs. In exchange, the investors get green cards. Washington Place is expected to create more than 1,600 jobs, according to Omar Lee, who came to the United States from Hong Kong and Christine Lee, who immigrated from Shanghai.

The Lees are best known for developing the Great Wall Shopping Mall on the border of Kent and Renton. They sold the mall three years ago for $9 million, according to public records, but have bought back a stake in the development, Christine Lee said.

The Lees bought the Tukwila Circuit City property for $3.35 million after the electronics retailer went bankrupt.

Seattle-based Coastal Hotels will manage the hotel and restaurant space. The Lees hope to capitalize on the property's proximity to Seattle-Tacoma International Airport and Boeing Field.

Rents for the studio to three-bedroom apartments have not yet been set.

"We feel [rents] will be substantially less than Seattle and Bellevue for comparable quality," said Omar Lee, who said the project will have a rooftop garden, club house, fitness facilities and a pool.

Three architecture firms – MulvannyG2, Group West and LNL – collaborated on the design of the project. Absher Construction is the general contractor.