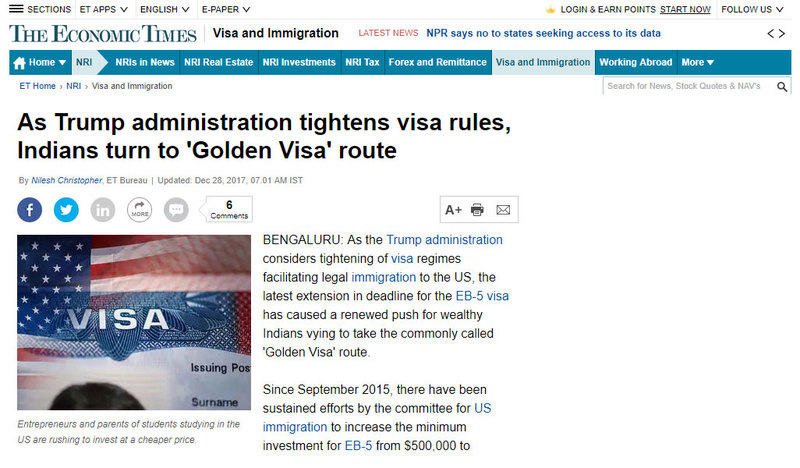 As the Trump administration considers tightening of visa regimes facilitating legal immigration to the US, the latest extension in deadline for the EB-5 visa has caused a renewed push for wealthy Indians vying to take the commonly called 'Golden Visa' route.

Since September 2015, there have been sustained efforts by the committee for US immigration to increase the minimum investment for EB-5 from $500,000 to $920,000. But, the deadline for the increase has been continuously extended with January 19, 2018 being the latest.

Entrepreneurs and parents of students studying in the US are rushing to invest at a cheaper price. "Since the investment is likely to get more expensive, Indians want to cash in at a cheaper price," said Abhinav Lohia, executive vice president - India and the Middle East, CanAm Enterprises, an EB-5 immigration services consultant. "We received around 15 queries a week and about 60 queries a month from India inquiring about the EB-5 programme," Lohia said. "Seeing the spike in Indian applications we are moving forward with opening an office in Mumbai."

The EB-5 immigrant investor programme provides opportunities for qualified foreign nationals to get permanent residency in the US by investing $500,000 in projects that will generate at least 10 full-time jobs in the United States.

"I have started making frequent trips to India conducting seminars about the programme talking to banks, real estate developers, parents etc," said Rohit Kapurina, attorney and EB-5 expert at Law firm Arnstein & Lehr's. "The proposal to not allow spouse of H-1B visa holders to work in the US too has made people gravitate towards EB-5". The minimum investment of $500,000 has remained the same since the inception of the EB-5 programme and the US Congress has been actively looking to increase the cap. The EB-5 allows investors to bring their spouse and unmarried children under the age of 21as part of their application.

"Indian parents and their children comprise of more than 50% of applicants for EB-5 followed by young professionals and HNIs," observed by CanAm Enterprise. India takes the number three spot in the total number of EB-5 applications after China and Vietnam who have filed 10,948 and 404 applications, respectively.