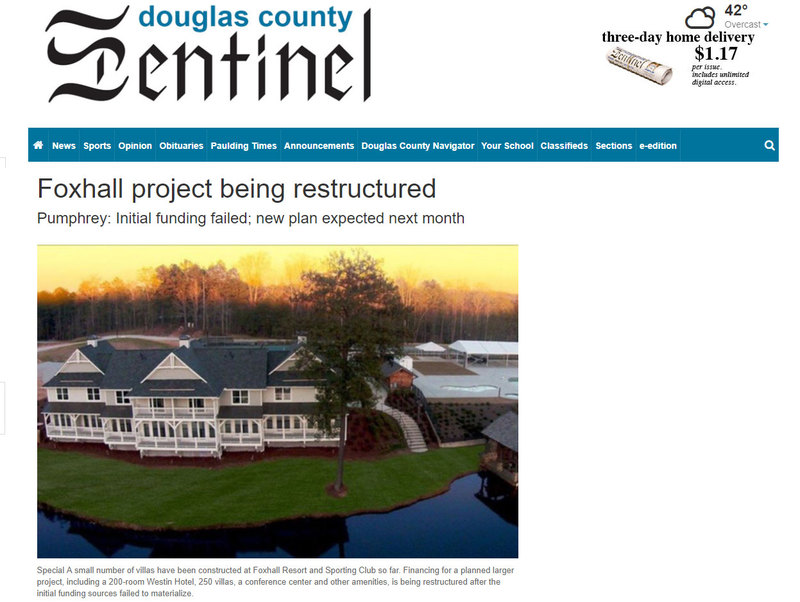 Special A small number of villas have been constructed at Foxhall Resort and Sporting Club so far. Financing for a planned larger project, including a 200-room Westin Hotel, 250 villas, a conference center and other amenities, is being restructured after the initial funding sources failed to materialize.

A plan to build a resort and conference center at Foxhall Resort and Sporting Club green-lighted last year by the Douglas County Board of Commissioners is undergoing restructuring for financing the project, with details of the new deal expected to come sometime in January.

According to Chris Pumphrey, executive director of the Development Authority of Douglas County, after previously sought funding sources failed to materialize, financers went back to the drawing board over the past year to put together a new funding plan.

The total project has been estimated to cost around $154 million.

In April 2016, the BOC approved an agreement for the project at the property on Capps Ferry Road that was to include a 200-room Westin Hotel, 250 villas, a conference center, spa and other amenities in south Douglas County.

The plan was that Foxhall would raise $89 million of the total through the EB-5 program authorized by Congress that allows immigrant investors to get U.S. visas by investing in commercial enterprises approved by the federal government.

Per the plan, the developer was contributing the land for the hotel, conference center, villas and other amenities.

The roughly 100 acres of the 1,100 total acres at Foxhall being used for the project would be exempt from property taxes until the $40 million in county-issued bonds for the conference center was paid off. A payment in lieu of taxes (PILOT) and hotel/motel taxes generated by the project would be used to pay off those bonds over a maximum of 30 years.

An intergovernmental agreement would give the development authority the go-ahead to issue the $40 million in revenue bonds that would be used to build the conference center, complete infrastructure improvements and reimburse transaction costs.

District 4 County Commissioner Ann Jones Guider, whose district Foxhall is in, was the only "No" vote on the project last year.

Contacted by phone recently, Guider said she has heard unconfirmed reports that construction was stalled due to delays with securing the EB-5 funding, which was required before the county issued bonds for the conference center.

Pumphrey confirmed that the EB-5 part of the original financing plan is no longer a part of the restructuring plan. He said the ownership group, Merrill Trust, has been working toward a new plan over the last year. New investors would be involved for the hotel and those details are expected to be part of an announcement coming in January.

Meanwhile, some activity has included sewer going in at the site; the first set of villas has been built and there are more cottages on the way, financed through the Merrill Trust, Pumphrey said.

Guider explained that she was opposed to allowing the tax abatement and had some other concerns with regard to the financing.

"I was opposed to it not only because we were going to abate them for 30 years, but they were also going to pay us PILOT funds, but that one was written up to where it funneled back into a trust fund that paid off the note on the hotel and the conference center, and we were getting really nothing out of it ..." Guider said.

Guider also said that usually permission is obtained from a school board to use PILOT funds in a private project, but that this one didn't obtain that, which was another issue for her.

Pumphrey acknowledged that public-private projects in Douglas are uncharted waters, and some resistance to this project was understandable.

"We've never done a deal where it appears we're giving away everything to the developer, but in reality it's a catalytic project; without the project we wouldn't be able to bring sewer down to that area, we wouldn't have been short-listed on a number of headquarters and training facility projects that have looked at the area. So, at times you have to step outside the box to have that type of catalytic project," Pumphrey said.

According to information at the DADC website, www.developdouglas.com: "... Other developments, such as Serenbe in Chattahoochee Hills and Technology Park Atlanta in Peachtree Corners, provide glimpses of the Westin Foxhall Project but our project will be reflective of the needs and wants of Douglas County in terms of development."

Pumphrey also pointed out that the remaining 1,000 acres at Foxhall is not a part the abatement plan.

"The total site for Foxhall is 1,100 acres and the project is 100 acres, so we're only talking about the 100 acres for development that's a part of this 30-year plan, but the remaining 1,000 acres which will get developed, is outside of that. So the value of that 1,000 acres is going to rise and it's also going to create demand for development in that area, which is additional tax revenue from all that to come from," Pumphrey said.

According to the DADC website, "Increased property taxes generated with the development of the hotel and sales taxes from the hotel should result in "a net gain of $96 million to Douglas County over the course of the Tax Incentive Plan ... infrastructure paid for by this project opens up the basin around Capps Ferry Road and Highway 5 for retail, hotel, higher education and corporate investment."

An estimated 260 permanent employees with a $9.1 million annual payroll are expected to come with the project, according to the DADC information.

Pumphrey emphasized keeping an eye on the long view for the development.

"You basically are taking an area that has little or no development now and ... you raise the value of all the land around it and then encourage future development around it. It will continue to bring a lot of benefits to our community and our region and then with that, there's no financial risk being borne by Douglas County by doing the project," Pumphrey said.