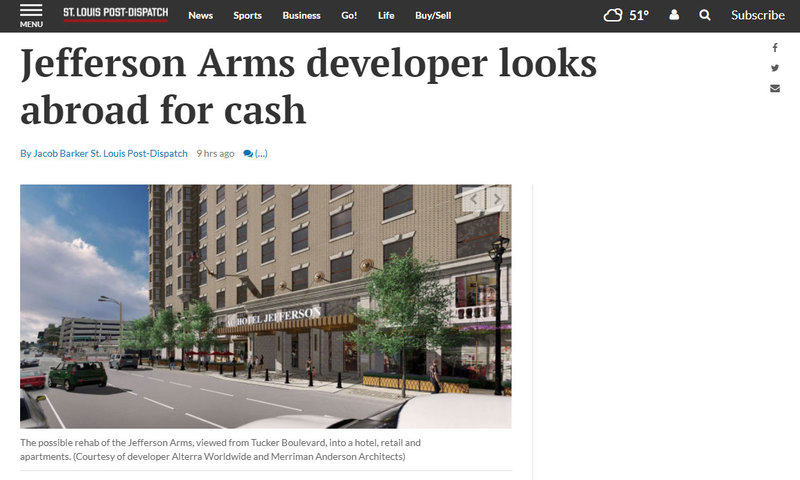 The possible rehab of the Jefferson Arms, viewed from Tucker Boulevard, into a hotel, retail and apartments.

A rendering of the proposed rehab of the Jefferson Arms on Tucker Boulevard downtown. 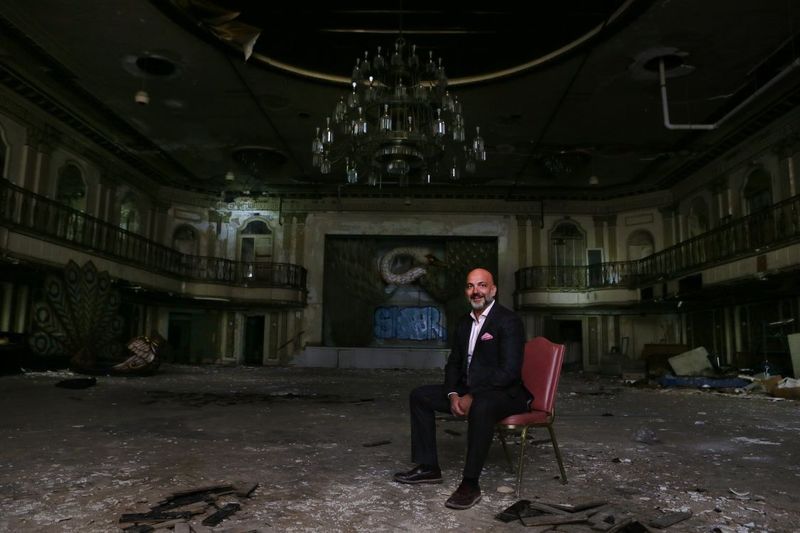 The new owner of the vacant Jefferson Arms building downtown is hoping to raise almost $50 million in foreign investments to help finance the historic structure’s redevelopment.

To help find the money, Alterra Worldwide inked an agreement this week to work with the Gateway to the Midwest Investment Center, an entity affiliated with the World Trade Center St. Louis. It will use the federal EB-5 program, which gives those foreign investors green cards — permanent U.S. residency — if they put at least $500,000 into certain projects and create enough new jobs.

Tim Nowak, who heads World Trade Center St. Louis, said the Gateway to the Midwest Investment Center provided the “platform” for Alterra to solicit investors and use the program. Nowak’s organization would help with compliance and reporting to U.S. Citizenship and Immigration Service, which needs evidence of jobs created and total investment before authorizing green cards for investors.

“It’s an added level of oversight for the foreign investor,” Nowak said. “So it makes it that much more attractive.”

The World Trade Center, which falls under the umbrella of the St. Louis Economic Development Partnership, first set up the EB-5 entity covering St. Louis, St. Louis County and St. Charles County in 2013.

“Since that time we’ve been looking for the right project or projects to utilize the program,” Nowak said. “It’s a niche program.”

Nowak said Alterra had used the EB-5 program before on its Butler Brothers building rehab in Dallas.

“They had a good team developed around this,” he said.

Alterra’s planned $104 million revamp of the Jefferson Arms, a 500,000-square-foot structure built as a hotel for the World’s Fair, appears to be moving forward.

Led by Mukemmel “Mike” Sarimsakci, Alterra closed on the purchase of the building over the summer. This month, the company filed a construction permit for the building with the city, signaling rehab work is near.

St. Louis officials have already offered up to $17.3 million in tax-increment financing to help with the development and another $2.6 million generated from special sales tax districts on site.

Sarimsakci, a Turkish-born developer, has used foreign contacts to raise overseas capital for other projects. Questions about those foreign ties and the potential conflicts they posed for President Donald Trump’s administration were at least part of the reason the Trump Organization pulled out of a hotel deal with him, the New York Times reported.

Sarimsakci had said he was working with the Trump Organization to roll out the Scion hotel brand, and early plans even included the possibility of one in the Jefferson Arms.