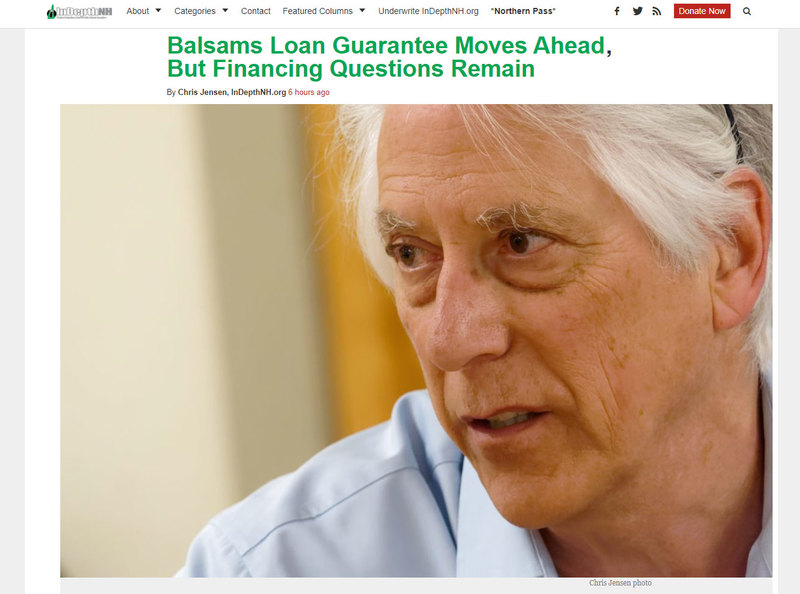 The effort to reopen the Balsams Resort has taken a “significant step forward on financing” with a request for a loan guarantee being filed with the state’s Business Finance Authority, Scott Tranchemontagne, a spokesman for the resort developer, said Tuesday.

But the announcement also raised questions about whether developer Les Otten has the remainder of the $170 million needed for the first phase of the project, which Otten says will give the North Country a much-needed economic boost with a world-class, year-around resort.

Service Credit Union of Portsmouth has reviewed Otten’s plans and is willing to loan him $28 million, but it wants the BFA to guarantee the loan. If the loan isn’t paid off the state could take part of the resort.

Getting the money from Service Credit Union is a major change.

For more than a year Otten has said that a Massachusetts bank – Northern Bank & Trust Company of Woburn – was studying the project and considering a $100 million loan. And, the Woburn bank would ask the BFA to guarantee $28 million of that $100 million.

But a news release from the Balsams does not mention the Woburn bank.

Asked about the “contemplated financial structure” Tranchemontagne said: “We have identified all of the various elements required for financing and have made great progress on all of them.  Each element requires its own separate effort and process.  The BFA credit enhancement is a critical element of the total package which is required to be in place to move forward.”

James Mawn, the president and chief executive officer of the bank, did not immediately respond to a request for comment.

Service Credit Union turned out to be a “better fit,” Tranchemontagne said.

The BFA will review the resort’s prospects and financial details and make a recommendation to the Executive Council and Gov. Chris Sununu.

Under state law the “the governor and the council may award” such a loan guarantee if a project “is of vital importance to the economic well-being and general welfare of a substantial number of the state’s citizens and will minimize the risk of permanent economic damage to the state or a region of the state.”

The Balsams would not be the first resort to get help from the BFA. It provided a guarantee to the Mountain View Grand in Whitefield and played a key role in helping Gorham Paper & Tissue remain in business.

The review by the BFA should take 45 to 60 days, James Key-Wallace, its executive director has said. He says a key economic measurement will be how many jobs are created

Tranchemontagne said the application to the BFA includes proprietary information and he declined to make it available.

However, a study commissioned by Otten says: