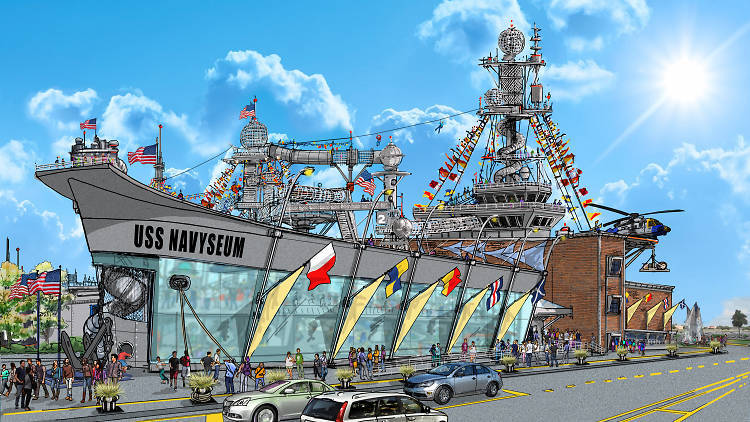 Want to be a sailor for a day? In 2019, Chicagoans will be able to visit the Navyseum—a giant attraction made up of decommissioned naval equipment.

The 130,000-square-foot complex is not an amusement park, as much as it is "an active exploration center." It's the brainchild of Ron Lanz, a former economic planner and consultant with North Chicago, who was inspired by the City Museum in St. Louis. The attraction plans to inhabit 11 acres along Sheridan Road, situated just west of Naval Station Great Lakes. It will feature indoor skydiving, a brewery and restaurants as well.

Aside from conceptual inspiration, this project is completely independent of the U.S. Navy, as a for-profit venture. Navyseum is open to marketing and partnership opportunities down the line.

"What really created the interest for me was working with North Chicago," Lanz said. "A lot of people don't realize how significant the Navy is in Chicago and the state of Illinois."

With 35,000 people on the base every day, Naval Station Great Lakes is a large source of tourism for North Chicago, largely due to the fact that a new group of sailors graduates from the Naval Academy every Friday. During 48 weekends out of each year, visiting family members from all over the country come to the area looking for tourism and entertainment opportunities.

Though Six Flags Great America is just a little further north, Navyseum is being positioned as a destination for local families in the suburbs, especially those with little ones interested in becoming sailors. Average admission price is expected to be $18, with discounts for military personnel and students.

"The entire model is based on the entire family being there together," Lanz said. "Parents, siblings, even grandparents can follow along with the kids. This is bigger—and intended to be more interesting—than the average children's museum."

With development costs clocking in at $43 million, the project is utilizing the EB-5 foreign investment program for a large portion—since North Chicago qualifies for the program—with private equity financing the rest of it, according to Lanz.

"We're not doing rides," Lanz said. "It's physical activity and imagination-driven. When are kids going to have the opportunity to climb on a real ship and use their own imagination?"

While Navyseum representatives have shared plans for the facility with North Chicago officials, final approval of the project is pending. For a look at what the expansive vision for the attraction, take a look at some renderings below.