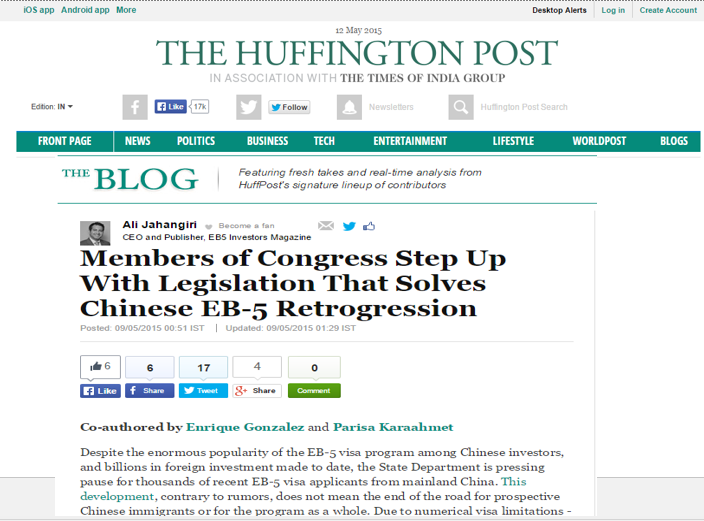 Despite the enormous popularity of the EB-5 visa program among Chinese investors, and billions in foreign investment made to date, the State Department is pressing pause for thousands of recent EB-5 visa applicants from mainland China. This development, contrary to rumors, does not mean the end of the road for prospective Chinese immigrants or for the program as a whole. Due to numerical visa limitations -- the EB-5 program only has access to a finite number of visas each year -- the system was designed to ensure that citizens from each country around the world would have a fair shot at an EB-5 visa. Now the State Department and United States Citizenship and Immigration Services (USCIS) are exercising a form of crowd control to allow non-Chinese investors to line up for their green card.

The current situation -- long predicted in the EB-5 industry as practitioners filed application after application for Chinese investors -- is referred to as retrogression. The anticipated retrogression of the EB-5 visa for Chinese nationals arrived on May 1, 2015. Effective that date, the State Department and USCIS will commence retrogression for EB-5 Chinese immigrant investors to May 1, 2013, meaning that investors who applied after that date will have to wait until more visas become available before their conditional U.S. residence commences. The effects of such action are not to be taken lightly. Multiple sectors, both within the EB-5 community as well as the larger U.S. economy, will feel the effects of this retrogression. Without legislation to remedy the burdens of retrogression, Chinese investors will likely find the line growing longer each year, and the United States could miss out on millions of dollars of investment ready to be deployed into our economy to create American jobs.

Background on visa allocation and per country limits

The popularity of the EB-5 program has risen each year since 2008. Recently, Chinese nationals have accounted for more than 80 percent of EB-5 immigrant visas and all indications point towards a nearly 10 percent increase for the coming fiscal year. Given that most investors immigrate with their family, and assuming that each investor enters with a spouse and one child, this would mean that there are actually enough immigrant visas in each fiscal year to accommodate only approximately 3,300 I-526 petitions (actual investors).

As of June 2014, there were 10,375 I-526 petitions pending with USCIS for FY2014--far above the amount of visas that could be granted for the year. Indeed, by the last month of FY2014, the State Department had used up all immigrant visas available for EB-5, and the preference category was temporarily oversubscribed until new immigrant visa numbers became available at the start of the new fiscal year in October 2014.

What does this mean for the economy?

EB-5 program investment totaled over $2 billion or 1.2 percent of foreign direct investment inflow in 2012. Given that a large percentage of the EB-5 money injected into the U.S. economy each year is as a result of Chinese investors, retrogression of EB-5 China could make the United States' EB-5 program less attractive to Chinese investors, which would likely have negative repercussions on the U.S. economy and job creation.

While the point was previously made that China EB-5 visa retrogression could be good for program diversity, it is unlikely that enough investors from other countries could match current Chinese demand if Chinese investors begin to turn elsewhere. Therefore, it is in the best interest of Congress and USCIS to take measures to protect this important source of foreign direct investment and American job creation by implementing statutory and/or regulatory measures. Not too much to ask, considering the EB-5 category accounts for less than 2 percent of all legal immigration to the United States.

A Solution for Retrogression and Reform for the EB-5 Visa

In early 2015, Congressman Polis (D-CO) and Congressman Amodei (R-NV) introduced H.R. 616, which contains a number of reforms. Besides China EB-5 visa retrogression, H.R. 616, if turned into law, will solve many of the issues the EB-5 industry is facing.

Elimination of the country cap requirement

As described previously, present immigration policy limits the number of visas issued per country to 7 percent of the worldwide allotment. Currently, China is the only country that has neared this mark, thus a "hold" on completing the permanent residence process has been imposed on Chinese nationals, despite strong demand among the Chinese to invest in the job creating program. H.R. 616 aims to solve this problem by placing a 15 percent per year cap. Observing the data USCIS posted at the close of FY2014, a total 5,115 I-526 petitions were approved. More than doubling the "cap" to 15 percent effectively eliminates the chance of future retrogression for any country whose nationals seek to participate in the EB-5 program.

Another area of significant change is language in the bill that provides that "derivatives" i.e., immigrants who are the spouse or child of the immigrant investor, no longer be counted towards the annual EB-5 visa allotment. In addition to providing immediate relief from an EB-5 waiting line, the removal of derivatives from the overall EB-5 visa limit would significantly increase the amount of investment made and American jobs created via the program, because each of the 10,000 visas would count towards an actual investor, rather than counting a visa towards each family member.

Prospect for the Future

The Polis-Amodei bill is a strong step in ensuring the future growth of the EB-5 Program. It augments the current program with both safeguards and benefits, to effectively provide for a more efficient program. The bill has seen eight additional co-sponsors (six Democrats and two Republicans), indicating it is picking up traction.

While EB-5 has been on the legislative bargaining table for a number of years, the recent development of retrogression conditions makes debate on program reforms all the more urgent. Though designed to provide equal opportunity to applicants from around the world, the current visa allowance structure could actually end up stifling the program and discouraging some of its strongest proponents.