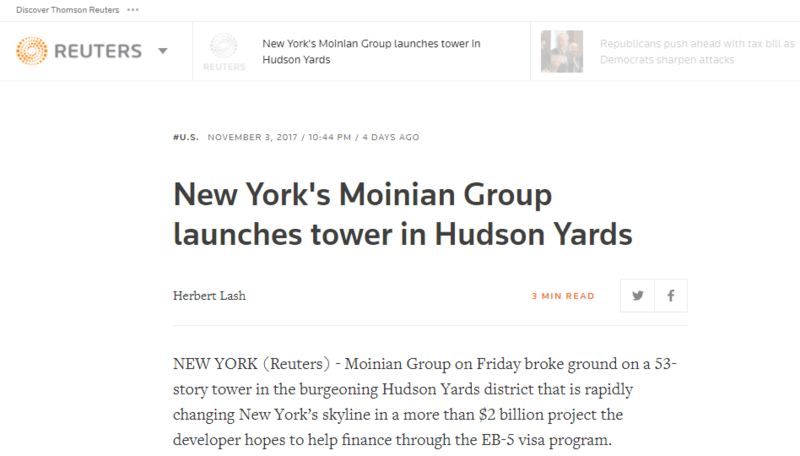 Moinian Group on Friday broke ground on a 53-story tower in the burgeoning Hudson Yards district that is rapidly changing New York’s skyline in a more than $2 billion project the developer hopes to help finance through the EB-5 visa program.

Moinian, a large New York developer, will fund the almost $100 million it will take to finish the foundations of 3 Hudson Boulevard on Manhattan’s Far West Side, said founder and chief executive Joseph Moinian.

Moinian is seeking $250 million to $500 million in investment through the EB-5 program that provides immigrants with permanent U.S. residency in exchange for a minimum investment of generally $1 million, Moinian said at a ground-breaking ceremony.

“We are in paper work as we speak,” said Moinian, adding the company is open to gaining partners to complete the 2 million-square-foot retail and office tower that will occupy an entire block.

About a dozen residential, office, lodging and retail buildings are under construction in Hudson Yards, a massive development that partially covers commuter rail lines going into nearby Penn Station.

Some 19.5 million square feet of construction is underway or proposed for Hudson Yards, a sign of the massive shift the district has caused in Manhattan’s office market, said Craig Caggiano, an executive at brokerage Colliers International.

The $600 million platform over the rail yards at Hudson Yards, which gives the massive development its name, was built in part through EB-5 investment.

To further develop an area that had been the talk of city officials for decades, a subway line was extended to Hudson Yards whose station is directly in front of the Moinian project.

“I believe this is going to be the hottest development in the city by far,” said New York Governor Andrew Cuomo at the ceremony. “The future is going to happen here.”

Related Cos with Oxford Properties has been the largest developer of the Hudson Yards district and has attracted a number of marquee corporations.