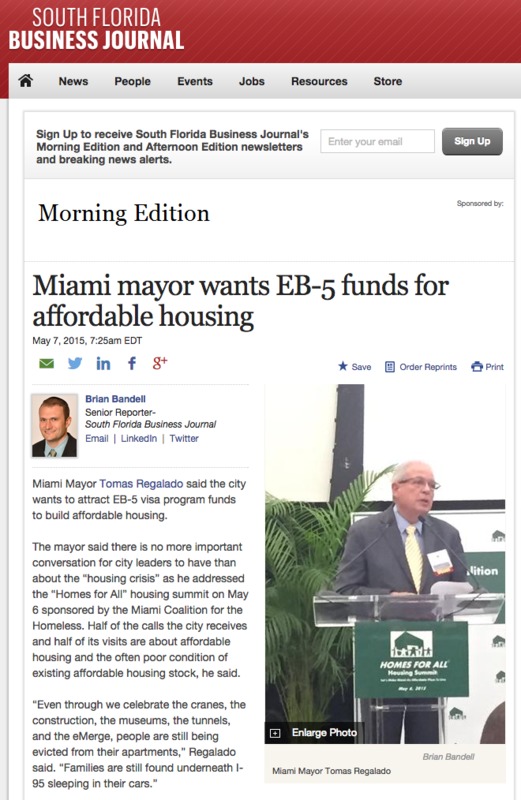 The mayor said there is no more important conversation for city leaders to have than about the “housing crisis” as he addressed the “Homes for All” housing summit on May 6 sponsored by the Miami Coalition for the Homeless. Half of the calls the city receives and half of its visits are about affordable housing and the often poor condition of existing affordable housing stock, he said.

“Even through we celebrate the cranes, the construction, the museums, the tunnels, and the eMerge, people are still being evicted from their apartments,” Regalado said. “Families are still found underneath I-95 sleeping in their cars.”

Regalado wants to use Miami’s designation as an EB-5 regional center to attract new affordable housing funds. This program grants visas to foreign investors with at least $500,000 in job-create funds to contribute to a project.

“It is a solid investment,” Regalado said. “It may not have the great return that those Ponzi schemes offer but it does have a return."

Pinnacle Housing Group Partner Michael Wohl said the EB-5 program would be an innovative way to attract affordable housing funds and his company would like to explore it.

In his address to the summit, Miami-Dade Mayor Carlos Gimenez highlighted his initiative to redevelop the Liberty Square affordable housing project, an area ridden with crime and unemployment that he hopes will become a mixed-income community that creates 2,300 jobs. The county has secured $74 million in funds to rebuild Liberty Square.