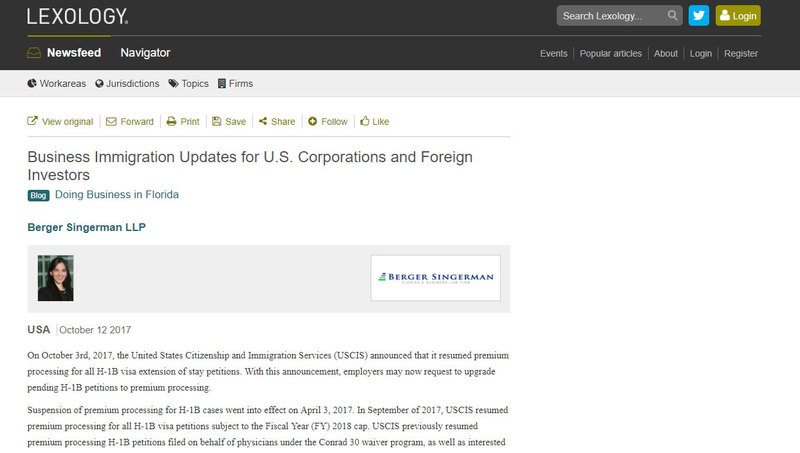 On October 3rd, 2017, the United States Citizenship and Immigration Services (USCIS) announced that it resumed premium processing for all H-1B visa extension of stay petitions. With this announcement, employers may now request to upgrade pending H-1B petitions to premium processing.

The H-1B visa allows U.S. companies to employ foreign professionals on a temporary basis to perform services in a specialty occupation, with a current general allotment of 65,000 visas per year and a separate allotment of 20,000 for individuals who have earned a master’s or higher degree from a U.S. university. If the foreign national will work at a university or affiliated nonprofit entities, nonprofit research organizations, or governmental research organizations, the petition for new H-1B employment is exempt from the annual cap, and the petitioning employer may file a petition for these cap-exempt H-1B categories at any time.

Premium processing ensures that an application will be reviewed within 15 days of filing, as opposed to the three to six months (or longer) that it can take for a standard review. This expedited procedure has been especially important for fast-growing companies with rapid and changing workforce demands.

EB-5 Program Is Extended Without Changes Until December 8, 2017

The United States Congress extended the EB-5 Regional Center Program until December 8, 2017 thanks to H.R.601 “Continuing Appropriations Act, 2018 and Supplemental Appropriations for Disaster Relief Requirements Act, 2017”, which the President signed into law on September 8th, 2017.

This is good news for foreign nationals who are considering the EB-5 option as a way to become permanent residents of the United States. The EB-5 program currently requires a minimum investment amount of $500,000 in targeted employment areas (TEAs) or $1 million in non-TEA areas. The language in Section 106 of H.R.601 does not imply, however, that the program will remain unmodified until December 8th. The U.S. Congress is reported to be working on a variety of immigration issues which could bring a legislation before December that will affect multiple visa categories including the EB-5 Regional Center Program. Proposed changes could include an increase in the minimum investment requirements for both TEA and non-TEA areas.