Could saving DACA cost the United States billions of dollars in foreign investment? 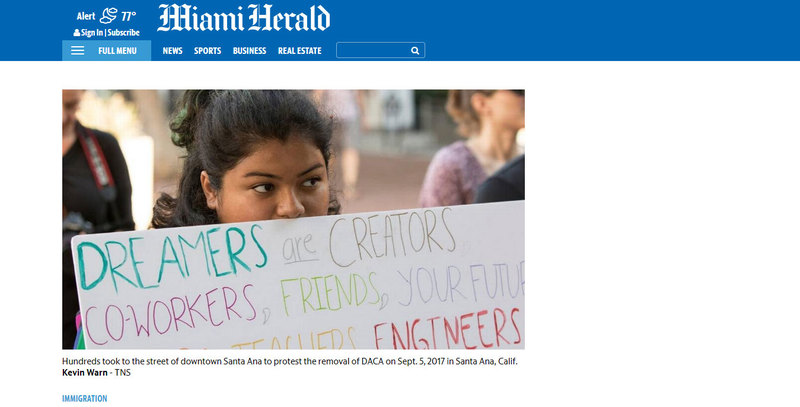 Hundreds took to the street of downtown Santa Ana to protest the removal of DACA on Sept. 5, 2017 in Santa Ana, Calif.

The measures demanded by President Donald Trump to save the young immigrants protected by the Deferred Action for Childhood Arrivals (DACA) program would create another immigration casualty: investor visas that have channeled hundreds of millions of dollars into South Florida development.

The perpetually endangered EB-5 visa — which narrowly escaped death last month when Congress extended it to December, days before it was set to expire — would be eliminated in Trump’s proposed immigration reforms.

The EB-5 allows a foreigner who invests as little as $500,000 in a new, job-creating enterprise to get a visa and, if the project is completed, a green card.

But under Trump’s plan, green cards would be awarded through a so-called merit-based system, in which immigrants get points for various things: youth, English-speaking ability, college degrees, winning a Nobel Prize or an Olympic medal.

Investment in the United States (at a significantly higher minimum level of $1.3 million) is one of the items for which points are awarded, but even the maximum investment would garner less than half the points necessary for a green card.

The White House presented the merit-based green card system as part of comprehensive immigration reforms that it said were necessary to save the DACA program, which Trump abolished in December. The young immigrants protected by DACA will be eligible for deportation starting in March if Congress and the president can’t reach an agreement on immigration reform.

If Trump’s proposal becomes law without significant changes — an iffy proposition at best, say congressional observers — it would mean the end of the EB-5, which by the estimate of the investment community has funneled more than $18 billion in overseas cash into U.S. business development in the past decade, including hundreds of millions of dollars in Florida.

Young immigrants and both Republican and Democratic politicians in South Florida disagreed with President Donald Trump’s decision to rescind DACA.

Yet many EB-5 supporters believe it will survive. Financial scandals and general congressional antipathy to immigration have pushed it to death’s door many times in the past five or six years — at least 10 times it has been rescued at the last minute by a temporary extension of six months or less — and yet the EB-5 has staggered away, more or less intact, on every occasion.

“There’s no way that we’re going to get a law this year permanently funding the EB-5,” said Gerardo Menchaca, a Texas-based attorney who has worked on several EB-5 funded projects in South Florida. “But I think they’ll have trouble passing a comprehensive immigration law, and in December, the EB-5 will get another little extension the way it always does.

“There’s no reason to quit extending EB-5 until there’s an alternative established for the United States to attract foreign investment. Too many other countries have some kind of program to bring in investors, and it doesn’t make sense for us to let them take all that money away from us.”