Lower costs prompting Chinese to turn away from investment programs 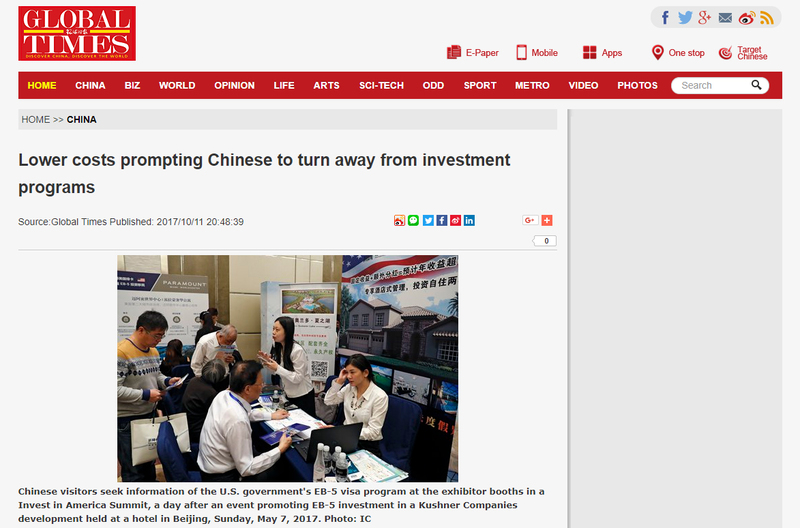 Chinese visitors seek information of the U.S. government's EB-5 visa program at the exhibitor booths in a Invest in America Summit, a day after an event promoting EB-5 investment in a Kushner Companies development held at a hotel in Beijing, Sunday, May 7, 2017.

After a wait of seven years, Xiao Duan finally moved to Canada with his father and got a permanent resident card. Duan is one of millions of Chinese families that have realized their "immigration dream" through other countries' investment immigrant programs. However, compared to the traditional program, Chinese immigrant agencies pointed out that lower costs and lower thresholds mean skilled immigrant programs have become a major choice for Chinese people seeking to move abroad.

Moreover, migration experts noted that along with the promotion of the Belt and Road initiative, European countries have gained rising popularity among Chinese immigrants.

According to the 2015 Report on Chinese International Migration, the third in the annual Blue Book Report series, released by think tank The Center for China & Globalization (CCG), the total number of Chinese migrants was around 60 million, making it the largest international migration group in the world. The main destinations of Chinese migrants are the US, Canada, Australia, South Korea, Japan, and Singapore.

In 2007, Duan's father applied for the investment immigrant program in Canada in the hopes of finding a better career. Among his investment was a house valued at C$50,000. However, he had to wait for seven years to get a permanent resident card and became caught up in a long-term lawsuit against the Canadian government after it proposed new requirements for immigration.

But now, the majority of Chinese migrant families are realizing their dreams through technology programs.

According to statistics from Shandong-based NewAchieve migration agency, at least 4,000 families will move overseas in 2017. Before 2007, around 300 families in Shandong moved overseas every year.

The report said that applicants with high-level academic degrees and skills are becoming the mainstream of Chinese international migration, as the requirements are comparatively low and the process is simple. Meanwhile, 90 percent of local migrant families did not live in overseas countries together. The fathers would work in China while the mothers and children would live overseas for a better education, and the families only reunited on holidays.

Posing as a client, the Global Times tried to contact a Beijing-based migrant agency, and a consultant told the reporter that it is very easy to apply for migration programs in some European countries.

"For example, if you want to move to Germany, you only need to pay 170,000 euros with an additional 50,000 yuan for agency payment. An undergraduate degree is needed but there are no requirements for your English level, no review of your assets and we can promise absolute success," said the consultant.

He added that the money will be used for finding a guarantee company for the clients to get a work visa. Two years later, if the client passes the language test, he can get a permanent resident card.

The consultant promised that the process would only take a few months and the agency he works at has successfully helped dozens of families move to Germany this year.

David Chen, a migration lawyer from Shanghai-based Visas Consulting Group, told the Global Times that traditionally, Chinese families usually chose to migrate for their children's education. However, in recent years, more and more people chose to go overseas for the different lifestyle and asset management reasons.

A recent paper released by Hurun Report in association with Chen's consulting group revealed that education and living environment continue to be the main reasons for emigrating overseas for the fourth consecutive year, accounting for 76 percent and 64 percent respectively. In addition, a new motivation, the desire for an ideal living environment, accounted for 53 percent this year, while other reasons included medical care, with 29 percent.

According to CCG's report, in 2013, skilled immigrants from the Chinese mainland accounted for 28.2 percent of the total migrant population in the US, up 4.9 percent from 2012.

Chen noted that along with the flows of China's foreign direct investment following the newly implemented Belt and Road initiative, a rise has been generated in international migration of Chinese laborers and entrepreneurs in the B&R countries.

According to an article published by the Berlin-based Dialogue of Civilizations Research Institute, a think tank that researches and develops proposals that address the key challenges faced by the international community, China's migration to Africa and the Middle East is on the rise.