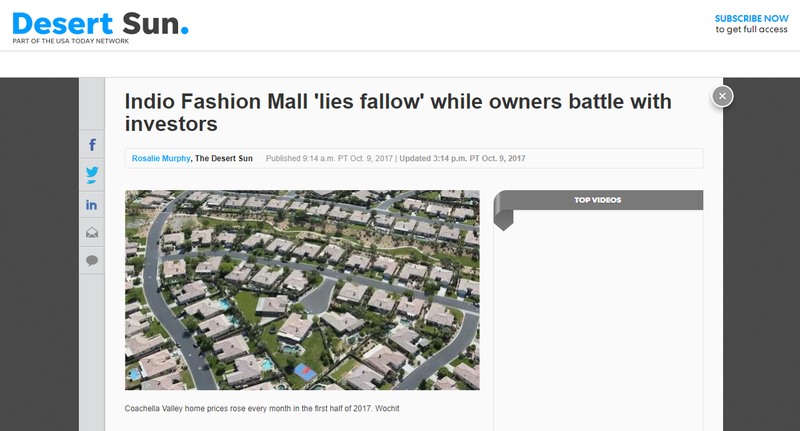 Coachella Valley home prices rose every month in the first half of 2017.

About 70 percent of the Indio Fashion Mall's storefronts are shuttered. Its two anchor tenants left years ago. Pop music rings through the brick behemoth of a building, bouncing off pink and blue tile on the floor. A fountain gurgles weakly in the center atrium.

Yet the mall sits on the corner of Monroe Street and Highway 111 in what could be a prime commercial corridor. Redeveloping the mall property is a "top priority" for the city of Indio, second only to revitalizing the city's downtown, according to city economic development director Carl Morgan.

Two developers have inquired recently, Morgan said. They expressed interest in buying a city-owned 20-acre property behind the mall, which a broker recently estimated was worth $2.6 million, as well as the mall. But the mall's owners want $14.7 million for their 19.5-acre property — even though Morgan thinks any buyer would just tear it down.

The owners, Frank and Helda Zeng, have owned the mall on and off for about seven years. Frank Zeng directed a reporter's questions to the mall's broker, Dennis Zhang. His attorney declined to comment for this story, citing ongoing litigation.

"They just haven't shown any interest in revitalizing the mall," Morgan said. "It's outdated and antiquated, and that kind of mall isn't getting built anymore." 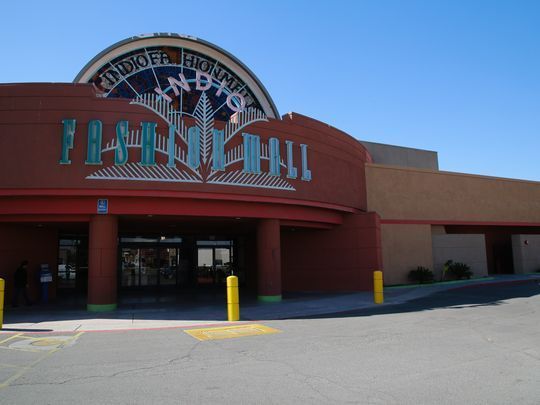 The Indio Mall, photographed on September 14, 2017, has seen no signs of the revitilization promised by its current owners.

In 2003, Malibu developer Richard Weintraub paid $16 million for the already-struggling mall and made a bold pitch. He wanted to turn it into something like The River in nearby Rancho Mirage, full of restaurants and retail with mass-market appeal.

Sears, one of the anchor tenants, left around the time he purchased the mall, according to two longtime tenants. Gottschalks, the other, left around 2008.

Weintraub changed the name to the Indio Fiesta Mall, which never really stuck, and gave it a new coat of paint. He sold the mall in 2010.

REO Property Group LLC, a company belonging to Frank and Helda Zeng, according to California

Secretary of State filings — paid $8.5 million for the property in 2010, according to Riverside County property records. Then they started seeking foreign investment to revitalize the mall. 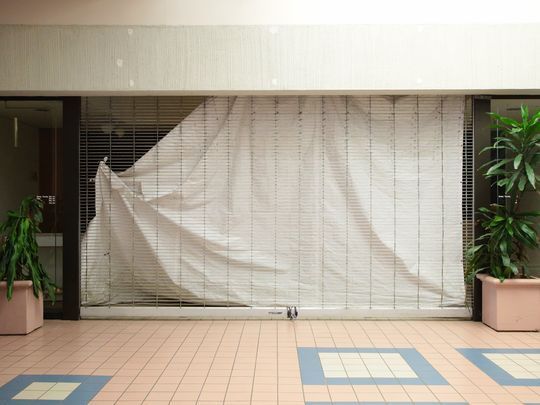 Sixteen investors from Taiwan and China sued the Zengs, their company and the principals of the investment firm in 2016. They claim they were courted as investors in the mall's renovation. But their visas were denied, because work on the mall never began and their investment money never returned.

According to court documents, those investors gave $500,000 each to an investment firm specializing in the EB-5 "immigrant investor" program, which allows non-U.S. citizens to invest money in development projects and get green cards in exchange.

The investment firm said it would loan the money to the Zengs to revamp the mall, attracting businesses that would create some 300 jobs — 10 per investor, per the rules of the program.

Then, in April 2013, REO Property Group LLC sold the mall to REO Group Properties LLC. (Zeng and co-defendants claim in court documents that the names were "not intentionally confusing.") The buyer paid $14.7 million — $3.67 million in cash, the rest financed.

Court documents allege that REO Group Properties defaulted on its loan payments in late 2013. Riverside County records show the Zengs — REO Group Properties' lender, as well as the mall's previous owner — once again took possession of the mall in August 2015.

The Zengs claim in court documents that they had no relationship to the company they sold the mall to in 2013. But in 2014, REO Property Group — Zeng's company — told The Desert Sun it was planning a $1 million facelift for the mall, with plans to spend up to $150 million on dramatic redevelopments. Frank Zeng identified himself as the mall owner, though property records show he didn't own the mall at the time.

Broker Dennis Zhang said he is responsible for leasing spaces in the mall, but did not know if the lawsuit had any bearing on new leases. When asked when the last new lease was signed, he said he did not know.

Zeng said in 2014 that renovations would move forward as soon as they collected enough EB-5 investment. 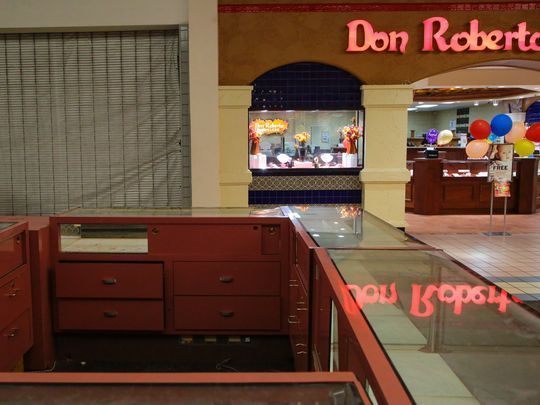 Business owners said none of those plans materialized.

Karen Ruiz is in her 32nd year in the Indio Fashion Mall. M Ruiz Jewelers, her business, also has a shop in Cathedral City and is planning for one on El Paseo. The mall may not make sense much longer.

"When we started our business, we were busy, and I didn't have to leave the mall. I could walk out and get my Christmas shopping done here," Ruiz said. "We had a great business, a successful business. It was just a great little mall."

Ruiz described the mall of the 1990s as a gathering place, which families would visit on Sundays after church. They'd eat lunch, parents would shop and kids would run around. Ruiz said her own kids grew up inside.

That hasn't happened in more than a decade.

"It's been almost 10 years that I've been hanging on for dear life," Ruiz said. "I just don't see anything getting better." 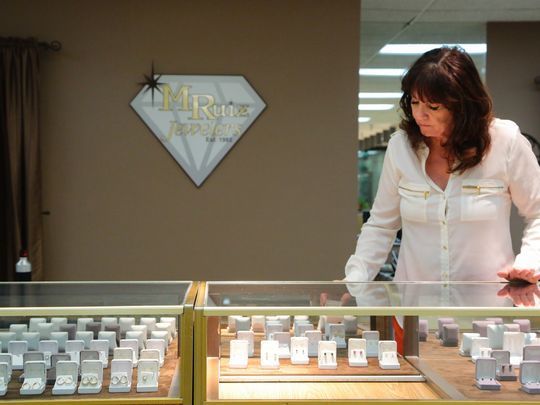 Karen Ruiz works in her jewlery store at the Indio Mall, September 14, 2017.

Tom Huna owns Team Sports, a screen printing and embroidery shop in a narrow space in the mall. He's moved his shop all over the valley over the last few decades, and the mall is a good location — people know how to find him and the rent is reasonable.

But the mall has never brought him a new customer, he said. It's all referrals and outside advertising.

"I would never depend on the foot traffic in this mall. It's an industrial space, not a retail space," Huna said. "The only way you make it a mall is if you fill it up."

Indio is 'actively looking for a developer'

Indio also owns a 20-acre parcel of land just south of the mall. Known as the John Nobles land, it was home to a predominantly African-American neighborhood that was razed in the late 1980s to allow for the expansion of the mall. That expansion never happened; today the land is vacant except for a church in the process of relocating.

The lack of development there, and what residents see as the city's failure to support them in relocating, its own source of frustration for former residents, said Carl McPeters, pastor at Kyriakos Christian Center Church, the last church standing.

When the city markets the John Nobles land to developers, however, mayor Elaine Holmes said they won't bite. A nearly vacant mall next door limits their success. And neither developers nor the city are willing to buy the mall at its current price. 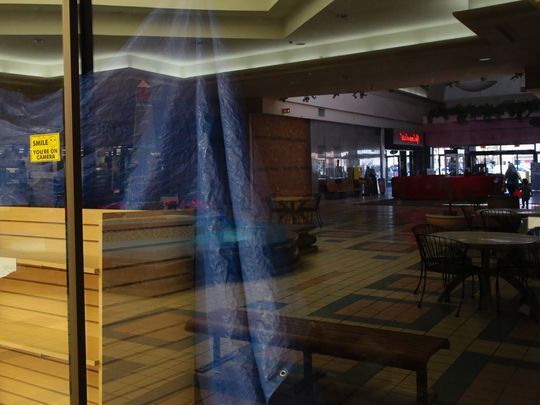 "We're actively looking for a developer," Holmes said. "That’s in the core of our city, so really, what a perfect location to have those outdoor restaurants and gathering places and coffee houses and a pavilion where there can be performances by local bands — it'd be terrific."

Holmes said she, city staff and members of city council have met with Zeng "year after year after year." No movement on the price.

"It's a hugely desirable development. It's probably at the very top of the list. Sadly, the challenges before us are... around the ownership of the mall," Holmes said. "It just feels like we're to some extent hamstrung by the current ownership."

Inside the mall on an October afternoon, a group of teens lined up for boba after school hours. Tom Hoda pressed surnames onto the back of kid-sized jerseys. Half a dozen cafe tables sat in a circle around the fountain, each of them empty. The teens left, boba in hand, without shopping.

"(Customers) don't have a reason to stop by when there's no other stores in here. They're just not coming in the mall," Ruiz said. "This was our main store. It's just gone down, down down — each year it's a little worse."