Can jared kushner be put out of his misery? 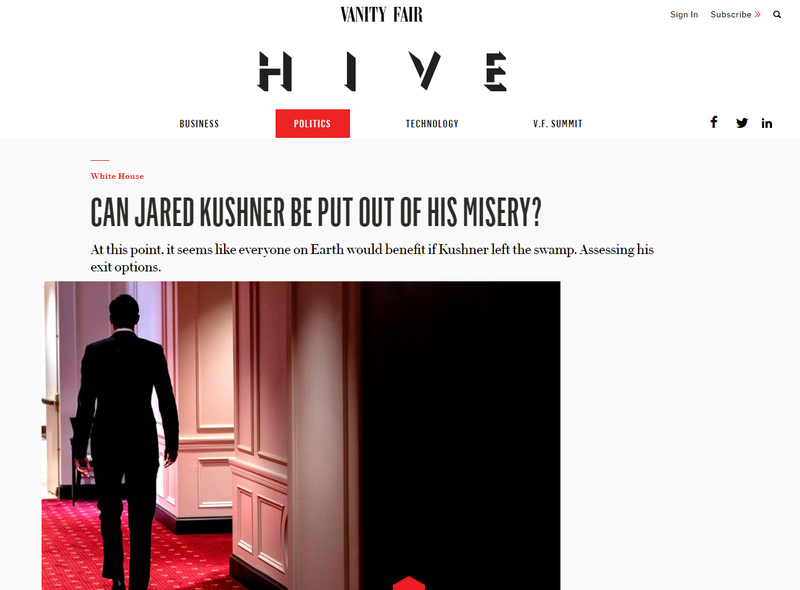 At this point, it seems like everyone on Earth would benefit if Kushner left the swamp. Assessing his exit options.

Kushner heads to a meeting with Trump and Qatar's Emir Tamim bin Hamad al-Thani at the Palace Hotel on September 19th.

Amid a horrific week, let us look away from the front pages and return, as a diversion, to Jared Kushner, a quiet but exceptionally incommodious presidential relation who should, for the good of the world, stop doing anything work-related, political or commercial, maybe forever. To be sure, bigger and more dangerous things are happening out there, and Kushner’s an easy target, with a fanbase that’s restricted to G.O.P. donors, leak-receiving journalists, and Lindsey Graham. I know that an attack on Kushner by this publication only helps the man. But everything we learn about Jared makes him look worse and worse, and the sooner he’s back in New York, the better for everyone.

Any explanation for why Donald Trump clings to Kushner must take into account more than simple family status. The spouse of your favorite daughter is always going to be tolerated, but he’s not always going to be tasked with forging peace in the Middle East or overseeing a new “White House Office of American Innovation.” No, Trump sets—or set—high store in Kushner’s talents, and the election, in this regard, seems to have been decisive.

While no one really knows what Kushner did to help Trump win the White House, we can safely assume Kushner told Trump the same story he told Forbes, which in December ran a cover with a grinning Kushner and the caption “This Guy Got Trump Elected.” Never mind that the only sources mentioned or quoted in the accompanying article were Trump Organization contractor Brad Parscale, Ivanka Trump, Trump-supporting venture capitalist Peter Thiel, Fox News C.E.O. Rupert Murdoch, former Google C.E.O. Eric Schmidt (who had nothing to do with it), Henry Kissinger (who had nothing to do with it), and Kushner himself. For Donald Trump, the November victory was proof enough. This kid knows computers. He’s a whiz. Today, though, even Donald Trump must be starting to see that Jared’s political impulses are nearly as bad as his own.

But these sins were merely foolish. Others have been embarrassing. It was Kushner who fumbled, it seems, in talks with Russians about setting up a communication backchannel. It was Kushner whose family went to China to promote a sleazy EB-5 visa scheme that allows you to effectively purchase U.S. citizenship by purchasing a $500,000 apartment. It was Kushner who was recently found to be conducting White House business on personal e-mail, right after a campaign during which Trump had hammered his opponent incessantly for the same sin. It was Kushner who kept looking for ways to keep his empire solvent, including looking for infusions of cash from titans in China and the Gulf states, after overpaying hugely for 666 Fifth Avenue.

Then there has been the alienation of colleagues. It was Kushner who badmouthed Steve Bannon to the press and former White House chief of staff Reince Priebus to the president, as my colleague Sarah Ellison has reported. It was Kushner who started chatting up senators about an immigration deal, so frustrating then-Secretary of the Department of Homeland Security John Kelly that, according to Annie Karni and Josh Dawsey at Politico, Kelly threatened to quit. It was Kushner who took over diplomacy in the Middle East, preventing Rex Tillerson from establishing a line of his own (and contributing to a mini-meltdown). Kushner’s a busy guy.

While all of Kushner’s blunders hurt Donald Trump, few if any of them managed to help anyone else. Meddling with foreign policy or breaking rules on record-keeping is hardly cause for rejoicing among Democrats or liberals or conservatives or Americans or inhabitants of Earth. This is one of those happy cases, then, where everybody benefits from a firing. For Jared to leave Washington would be a win-win-win-win. 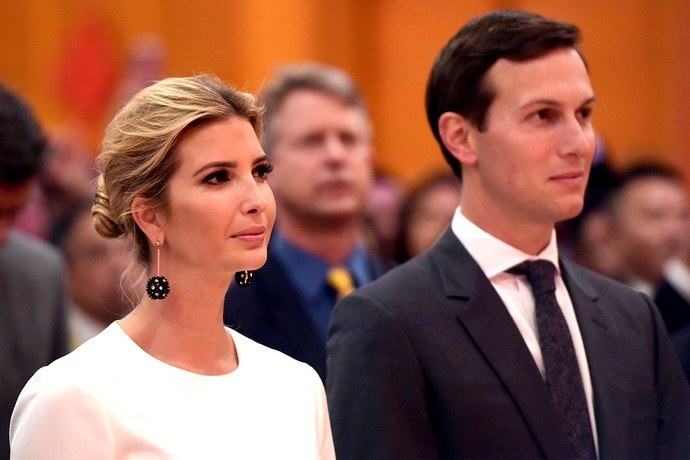 Ivanka and Jared attend the National Day reception in DC on September 27th.

The next question becomes about how. Here, Ivanka enters the picture. One of the troubles with hiring couples is that you can’t fire only half of them, even less so if they’re family. This is just reason 57 why nepotistic hiring is trouble. Trump wants Ivanka, who’s his favorite kid, around the office, but she comes with a husband. If Jared gets the boot, then Ivanka leaves, too. So Trump must decide whether to keep both or lose both.

The clues so far point to Trump favoring the loss of both. According, once more, to Politico’s Karni and Dawsey, he has been suggesting to Ivanka that she leave town. “Baby, you’re getting killed,” he has reportedly told her in front of other staffers. “This is a bad deal.” This is how you get rid of Jared without creating hard feelings: you play the dad card and say you can’t stand to see your kid get knocked about. Ease out Ivanka, and Jared follows, and Thanksgiving doesn’t have to be unbearable.

Admittedly, a White House without Ivanka has its own set of plusses and minuses, and those must be factored in. Many people believe that Ivanka, alone among people on Earth, has the power occasionally to say, “Da-ad,” in a tone of reproof when the president goes overboard. That’s worth something, if true. Plus she offers comfort. Presidents who have gotten deeply depressed while in office—and this happened to several who suffered sudden and traumatic bereavement, such as the loss of a child—have done their job poorly. Loneliness and isolation could make Trump’s decisions much worse, and he’s not batting so brilliantly as it is. Finally, considering that her position requires loyalty to her father without open signals of disapproval, I’d submit that Ivanka negotiates with surprising grace the dilemmas of a job she shouldn’t have in the first place.

But that’s the thing: she shouldn’t have the job in the first place. Close family doesn’t belong in the West Wing. Many of us are willing to argue heatedly with the boss. Few of us are willing to argue heatedly with the boss’s spouse. This is why Hillary Clinton’s directives made people in the Bill Clinton White House jump in a way that those of her husband didn’t. Ivanka’s directives undoubtedly have the same effect, as do Jared’s. Plus Ivanka has her own set of problems. According to ProPublica, Ivanka and one of her brothers barely avoided prosecution for felony fraud for misleading prospective buyers of units in the Trump SoHo. More dirt will surely come out as long as she’s in official power.

Nothing prevents Ivanka from visiting her dad or talking to him. Nor does anything prevent Jared from calling the White House and offering terrible advice while creating new business catastrophes of his own. But it does alleviate some of the court intrigues and backstabbing. And—as one could at this point say of scores of possible changes to the Trump White House—it won’t make things any worse.