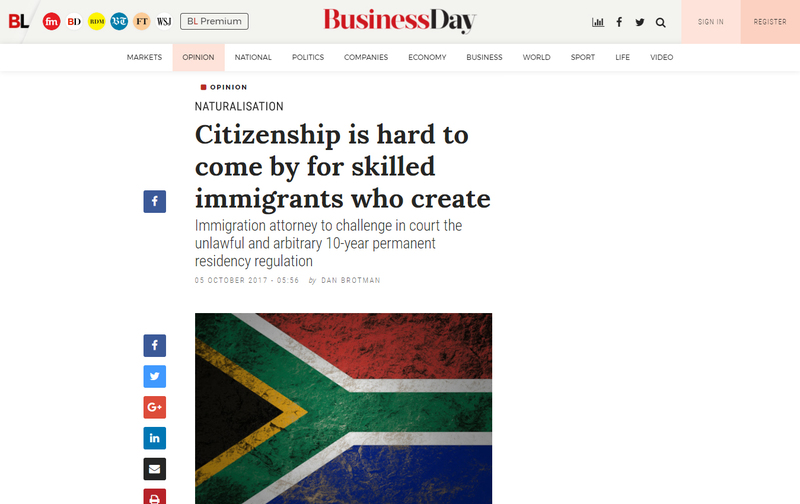 Almost seven years ago, I arrived in SA as a 24-year-old unemployed university graduate from Israel and the US. I had met my then South African partner while on holiday in Cape Town, and due to the US Defence of Marriage Act, which forbade US citizens from sponsoring same-sex partners for green cards, our only option was for him to sponsor me to move to SA as his life partner on a temporary residence visa.

In 2013, I was granted permanent residence based on "extraordinary skills", which I demonstrated through work, references and publications. I used these skills to launch En-novate, a company I co-founded that takes South African entrepreneurs and business professionals to different parts of the world to look at innovation and how to make local companies more globally competitive and stimulate job creation.

To date, we have taken hundreds of South Africans to world-leading ecosystems such as Amsterdam, Seattle, Silicon Valley and Tel Aviv to explore the future of industries of strategic national importance, such as agriculture, manufacturing and financial services. We have even worked with the public sector including the Department of Science and Technology and Council for Scientific and Industrial Research.

In 2016, I decided to make the ultimate commitment to the country in which I have lived most of my adult life and applied for South African citizenship. In my application, I demonstrated my personal financial commitments to SA (including property ownership), the number of South Africans I employ, as well as the many economic contributions my company has made to SA (not to mention the corporate taxes we pay) by taking small, medium and microenterprises and business professionals abroad to promote doing business with SA.

Section 5(1) of the South African Citizenship Amendment Act of 2010 states that the minister may grant a certificate of naturalisation as a South African citizen to any foreigner who satisfies the minister that he/she "has been admitted to the republic for permanent residence" and "is ordinarily resident in the republic and that he or she has been so resident for a continuous period of not less than five years immediately preceding the date of his or her application". In short, one must be a permanent resident and have lived continuously in SA (no more than 90 days out of the country per year) for at least five years.

Nonetheless, the department has been systematically rejecting the citizenship applications of countless foreign nationals on the basis that we have not been permanent residents for 10 years. This arbitrarily constructed 10-year regulation is not being implemented as the drafter of the legislation intended, otherwise the act would have specified permanent residency of 10 years as a prerequisite for naturalisation.

I have just returned from the Netherlands, where government officials have established a special office to assist highly skilled individuals to obtain residency. My home country grants green cards in the EB-5 visa scheme to individuals who invest at least $1m in businesses that employ at least 10 US workers. These individuals are eligible to apply for citizenship after holding a green card for at least five years.

In contrast, immigrants in SA such as myself, who are not a burden on the state and actually create jobs in a country with an unemployment rate of 27.7%, are having our citizenship applications rejected based on unlawful regulations. Section 5(9)(a) of the act states that, "The minister may under exceptional circumstances grant a certificate of naturalisation as South African citizen who does not comply with the requirements … relating to residence or ordinary residence in the republic."

Former home affairs minister Malusi Gigaba invoked this section when granting the Gupta family early naturalisation due to their "business investments and social partnerships", with the department citing the company’s loyalty and commitment to job creation as good reason to grant the family citizenship. It appears that these special circumstances are selectively applied to the extremely politically connected, leaving the rest of us with rejected applications and wondering whether our skills are even desired by the South African government.

This has left immigrants in my predicament with no option but to litigate. Immigration attorney Stefanie de Saude is taking the issue of the arbitrary 10-year permanent residency requirement to court on behalf of a client. It will be heard in Cape Town on November 23. I hope this issue is resolved swiftly by the courts before these arbitrary regulations lead to the departure of much-needed job creators. I have said goodbye to several friends in 2017 who were forced to leave due to the Department of Home Affairs not taking their unique economic and social contributions into consideration.

‘Blaming the Constitution is just buck passing. It removes the need for serious thought on how we hold power to account’

In an era of globalisation, where countries are competing for the best talent regardless of their country of origin, SA is sending a strong message to entrepreneurs that our economic and social contributions do not merit South African citizenship (despite legally qualifying), and we are thus not wanted here.

On April 25, Home Affairs Minister Hlengiwe Mkhize told Business Day that she committed to making it easier for skilled migrants and investors to get through the system and that her department would "sharpen its efforts aimed at attracting skilled migrants to help rescue the economy, which is stuck in a low-growth trap and is contending with high unemployment".

I implore the minister to make good on her word and grant citizenship to legally compliant applicants, who are deeply committed to building this country and growing its economy. In addition, early naturalisation for permanent residents who are making a significant economic contribution to the country by invoking section 5(9)(a) should be applied broadly and based on merit.