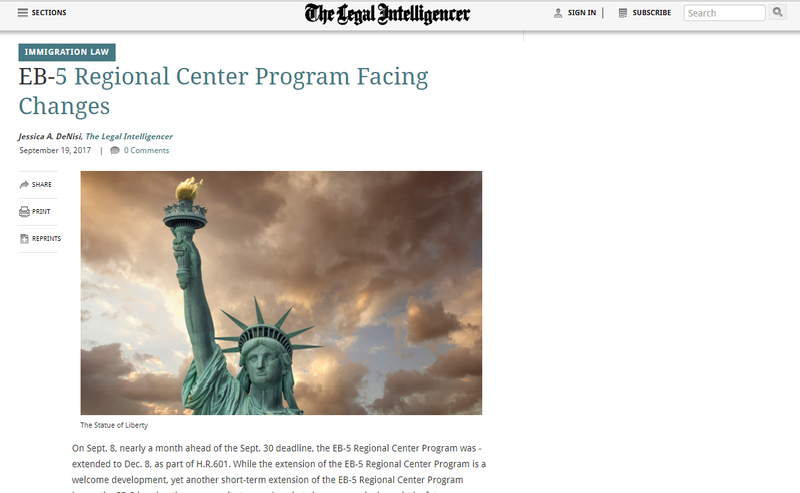 Under the EB-5 visa category, immigrant investors who satisfy statutory and regulatory requirements are able to invest $1 million (or $500,000 in targeted employment area (TEA)) in a new commercial enterprise that will employ 10 full-time U.S. workers, allowing the immigrant investors to obtain conditional permanent residence for two years. Investors' conditional residence can be made permanent upon demonstration at the end of the two years that the investment proceeds have not been withdrawn and the requisite jobs have been created. The ­investor may decide to invest in his own business and create jobs directly through that business, or to invest in a "regional center." Regional centers are government-approved entities in designated ­geographical areas which sponsor projects through pooled investments from several EB-5 investors, resulting in the creation of direct, indirect and induced jobs for U.S. workers.

Past pieces of draft legislation have included numerous proposals that would create significant changes to the EB-5 Regional Center Program. Based on past legislative efforts, these potential changes might include revisions to the definition of a TEA or changes to the criteria used to evaluate whether a location qualifies as a TEA; an increase in the amount that an immigrant investor would need to invest in a new commercial enterprise to be able to petition for conditional permanent ­residence; the creation of separate categories of reserved visas for areas of urban poverty and for those areas that are not considered TEAs; and significant increases in regional center compliance requirements, including various certifications verifying the investment opportunity's compliance with securities laws.

While some of these provisions are somewhat controversial or subject to debate as to whether such measures enhance or hurt the EB-5 Regional Center Program and its goal of promoting economic growth and job creation, ­enhanced compliance requirements are, without debate, a needed and necessary component of the EB-5 Regional Center Program moving forward. Recent ­allegations of fraud and misuse of funds involving ­certain projects have underscored the need for oversight, transparency and compliance procedures for the EB-5 Regional Center Program. Although instances of fraud were limited to a minority of bad actors, the new protocols are universally welcomed by those participating in the program, many of whom already had monitoring and oversight procedures in place in order to satisfy their fiduciary duties and consider the measures a part of regional center best practice.

Based purely on past legislative ­efforts, future compliance or oversight measures for participants in the EB-5 Regional Center Program might include such provisions as a bar on participation by anyone convicted of criminal or civil fraud within the last 10 years, or who has violated securities or banking law, or committed other criminal or civil offenses. In order to enforce these requirements, past legislative drafts have provided the authority for ­fingerprinting, biometrics, and background checks on persons involved with regional centers. In addition, under various draft pieces of legislation, only U.S. nationals or lawful permanent residents would be eligible for involvement with regional centers. Regional centers would also be required to issue annual certifications, after ­performing due diligence, to attest that the regional center is in compliance with federal and state securities laws. Regional Centers may be required to monitor and approve all offerings made by parties associated with the regional center and maintain records of the offerings over what is now required. And finally, the regional centers would have to provide an annual certification ensuring that all parties associated with the regional ­center remain in compliance with the securities laws of the United States and any state in which the regional center operates.

In addition to the proposed compliance provisions that may be included in new legislation, certain compliance and oversight measures have already been implemented or are in the process of implementation. In the House Judiciary Committee's hearing on the future of the EB-5 program in February of this year and in written testimony submitted for the hearing, Director Nicholas Colucci stated that his initiatives included creation of a Regional Center Compliance Unit to increase regulatory compliance, establishing an audit program to increase oversight of its regional centers, initiation of site visits by the Fraud Protection and National Security unit of USCIS, use of security checks for regional center businesses and executives, and increased interviews for I-829 applicants seeking to remove conditions on their green cards. During the April 25 stakeholder's call, USCIS also announced it is imminently implementing three new compliance initiatives: regional center audits, site visits and interviews for investors filing I-829 petitions, all of which have been implemented.