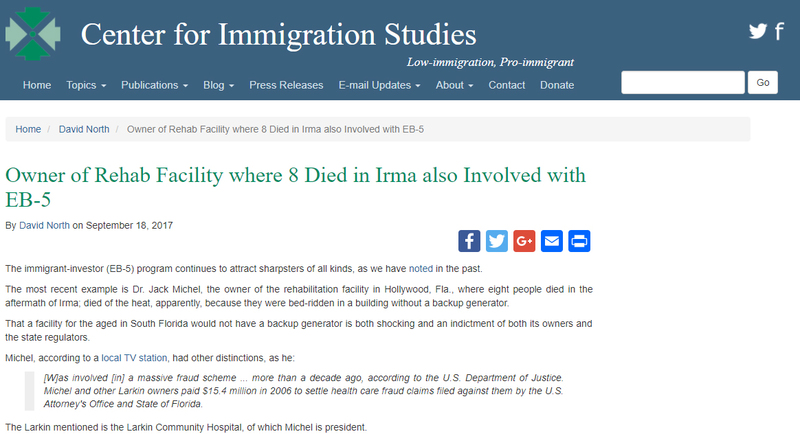 The immigrant-investor (EB-5) program continues to attract sharpsters of all kinds, as we have noted in the past.

The most recent example is Dr. Jack Michel, the owner of the rehabilitation facility in Hollywood, Fla., where eight people died in the aftermath of Irma; died of the heat, apparently, because they were bed-ridden in a building without a backup generator.

That a facility for the aged in South Florida would not have a backup generator is both shocking and an indictment of both its owners and the state regulators.

Michel, according to a local TV station, had other distinctions, as he:

[W]as involved [in] a massive fraud scheme ... more than a decade ago, according to the U.S. Department of Justice. Michel and other Larkin owners paid $15.4 million in 2006 to settle health care fraud claims filed against them by the U.S. Attorney's Office and State of Florida.

The Larkin mentioned is the Larkin Community Hospital, of which Michel is president.

I have not seen anything in the media about Michel's EB-5 connection. It was called to my attention by one of my alert readers.