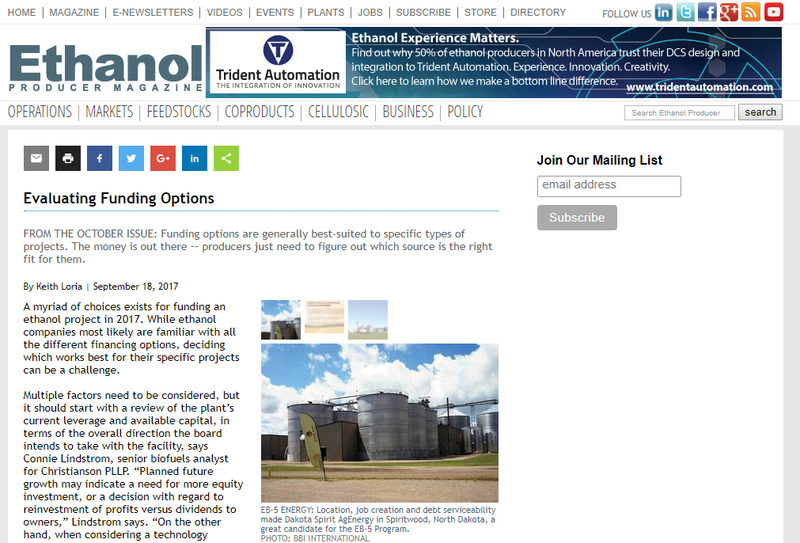 QUALIFIED CANDIDATE: Aemetis Inc. used the EB-5 program to develop and construct its ethanol plant in Keyes, California. EB-5 is a nontraditional equity source, but can be explored for certain qualified projects.

Funding options are generally best-suited to specific types of projects. The money is out there –– producers just need to figure out which source is the right fit for them.

A myriad of choices exists for funding an ethanol project in 2017. While ethanol companies most likely are familiar with all the different financing options, deciding which works best for their specific projects can be a challenge.

Multiple factors need to be considered, but it should start with a review of the plant’s current leverage and available capital, in terms of the overall direction the board intends to take with the facility, says Connie Lindstrom, senior biofuels analyst for Christianson PLLP. “Planned future growth may indicate a need for more equity investment, or a decision with regard to reinvestment of profits versus dividends to owners,” Lindstrom says. “On the other hand, when considering a technology upgrade to boost productivity at a plant with low current debt, taking on long-term debt may be more appropriate.”

Another consideration is timing — the anticipated lifecycle of the project, as well as urgency. “Quick-turnaround technology projects require cash or similar short-term financing, whereas an investment with a long depreciation cycle is obviously going to need long-term financing or even a round of equity raising,” Lindstrom says.

In general, specific types of funding can properly suit specific projects. This month, Ethanol Producer Magazine lays out a list of financing options, detailing when they might make the most sense.

1. Loan Incentives
The ethanol industry is mature, with many plants carrying either no or low long-term debt. For a plant in this situation, Lindstrom says improving leverage by taking advantage of a loan incentive is the best way to go.

“Particularly for projects that will replace one power source with a ‘greener’ power source — a project like that may not immediately have a large impact on earnings, so it makes sense to finance this type of project with an incentivized loan,” she says.

2. Capital and Equity Funding
Jamey Cline, business development director at Christianson PLLP, says capital and equity funding are best for a project that’s going to actually increase the earnings base for a plant, like an expansion or increased revenue from coproducts.

“Investors will get a return on the capital they’re putting back into the business, and cash flow isn’t tied up in debt repayment so it can be used to fund the necessary increased costs of expanding: more feedstock purchases, higher labor costs, and so forth,” he says.

3. Grants
When an ethanol project is considering going the grant route, the key is to always take the time to research local, state and national grant opportunities as part of the funding package.

4. EB-5 Program
Another option, which might be considered nontraditional, is the EB-5 program. It attracts eligible foreign investors in exchange for green cards. Kraig A. Schwigen, president of CMB Regional Centers in Rock Island, Illinois, says EB-5 works best in combination with other sources of financing, and its role in any project is determined by the total number of new jobs that will be created.

But it can be challenging to jump through all the right hoops for the program, Lindstrom says. “EB-5 funds have to generate at least 10 jobs — and many of the projects currently underway in the industry are efficiency improvements. Those kinds of projects may not generate any jobs at all.”

“EB-5 is not right for every project nor is every project right for EB-5,” Schwigen says. “It is important to remember that individuals investing through EB-5 are seeking immigration to the U.S. so this is an investment unlike a traditional investment. Done right, EB-5 can do great things. Done wrong, EB-5 can lead to great harm as immigrant families can be uprooted from their new home due to the failures of others.”

Still, a number of ethanol producers have had success with EB-5, specifically with projects that include a new plant, or a plant expansion that requires a lot of equity. Aemetis Inc. used EB-5 funding for its ethanol plant in Keyes, California, after initially raising equity by selling part of its business. “After the 2008 financial crisis, the availability of capital for biofuels plants shrunk considerably,” says Eric McAfee, Aemetis CEO. “We were able to arrange senior debt financing out of Canada, but we lacked access to equity financing due to concerns about the regulatory enforcement of the federal Renewable Fuels Standard.” Through EB-5, Aemetis raised $35 million from 70 foreign investors, and then another $50 million from 100 investors.

“We were motivated by the fact that the entire financial system stopped and this was the mechanism to get foreign investors into our project and avoid the crisis that was happening domestically,” McAfee says. “It’s a significant legal and regulatory burden to prepare a project and get approvals. It’s time consuming and expensive, and we spent several years going through the process and it technically took six years to raise the money.”

McAfee says equity capital remains difficult to obtain because of multiple uncertainties, with a large concern now being low oil prices. “It’s the right way to go when you have an operating plant with a profitable history and you want to expand,” he says. “You also need a management team that’s willing to travel. You need at least one senior person who is going to spend a significant amount of time in Asia, the Middle East and Europe. And third, you have to be willing to invest a long period of time in staffing, legal and other costs.”

Money is Out There

In the past few years, plants have used capital to fund projects, holding less in reserve. But the number of plants seeking grants and loans for projects has increased, too.

“At one point, our Biofuels Benchmarking program showed nearly a quarter of participants with zero or near-zero long-term debt obligation,” Lindstrom says. “So I’d say the trend overall is not one particular type of financing for projects over another, but rather the trend is to fund more projects period; to start doing some assessment of aging assets, in terms of the long-term viability of the business; and taking the plunge into stretching out that viability with projects of all kinds of financing.”

The important thing for ethanol companies to realize is there is money available for ethanol projects. There are grants out there, lenders are looking to lend and equity investors are interested in the ethanol marketplace.

“Sometimes the financing opportunity even comes to you first, or at the same time as the project,” Lindstrom says. “Opportunities to fund portions of projects with grants are a good example of this. But it’s important to remember not to put the cart before the horse, and take the time to perform the due diligence to determine if a project will be beneficial to the bottom line before undertaking any project. A grant may seem like ‘free money,’ but it’s not free if the project it’s intended to fund doesn’t pull its weight on the balance sheet.”