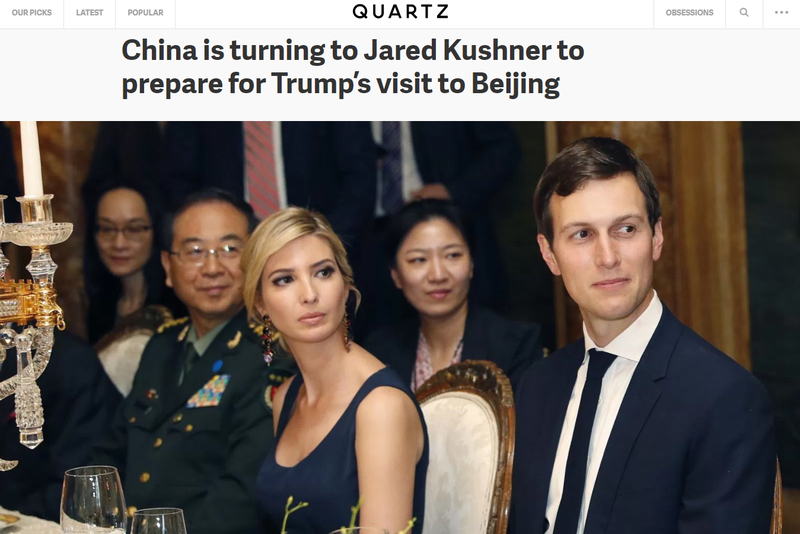 Jared Kushner, advisor to and son-in-law of US president Donald Trump, is facing growing scrutiny over possible collusion with Russia during Trump’s election campaign. Some in Trump’s legal team had even suggested that Kushner step down (paywall). But China, it seems, is still confident of Kushner’s position in the White House.

China is one of the many challenging issues in Kushner’s exceptionally broad portfolio in the White House. He is reported to be the chief broker of Trump and Chinese president Xi Jinping’s first meeting at Mar-a-Lago in April, during which Kushner rolled out his kids to recite ancient Chinese texts for Xi. North Korea and trade issues are expected to be at the top of the agenda at the next Xi-Trump meeting, likely to take place in November.

But Kushner’s role in China diplomacy has been controversial. Earlier this year, Kushner Companies, the real-estate firm owned by his family, ended talks with politically connected Chinese insurer Anbang to redevelop a Manhattan property, after critics pointed out potential conflicts of interest. In May, Kushner’s sister, Nicole Kushner Meyer, used her family ties in the White House to attract Chinese investors to help fund a Kushner real-estate project via a visa program that awards foreign investors with US citizenship. Federal prosecutors are now investigating Kushner Companies’ use of the so-called EB-5 program, the New York Times reported (paywall) in August. The curious timing of Kushner’s wife Ivanka Trump’s trademark deals in China has also raised eyebrows.

As scrutiny over Kushner’s connection with Russia grows, he and Ivanka Trump reportedly (paywall) turned down an invitation from China to go to Beijing this month in preparation for Trump’s visit. But state councillor Yang’s meeting with Kushner signals that the US president’s son-in-law is still viewed by Beijing as a key channel for high-level interactions between the White House and the Chinese leadership. Shi Yinhong, a professor at Renmin University of China, told the South China Morning Post: “it is the Chinese way to always care for ‘old friends.’”