Chinatown, of a Different Sort

Contributor Perspectives offer insight, analysis and commentary from Stratfor’s Board of Contributors and guest contributors who are distinguished leaders in their fields of expertise.

Chinese property developers have famously transformed their country's towns and villages into sprawling metropolises. But over the past few years, they've taken their craft and applied it overseas as well, reshaping the cities of the West. The Chinese investment boom has proved to be one of the most important events for Western real estate markets in recent memory. In some ways it is also one of the most unexpected.

According to conventional wisdom, more developed countries tend to invest in their faster-growing, less-developed peers, not the other way around. Chinese investors, however, have forgone the potential of the real estate market at home to pump money into slower, more stable markets abroad, especially the United States. But their unusual behavior is motivated by a particular set of circumstances — one that may not last much longer.

Chinese investors have good reason to move their money out of the country. For one, China's economy has weakened over the past few years, likely even more than official figures suggest. As a result, returns on investment in China are less promising than they have been in the past; the real estate market, in particular, may be heavily overvalued. It's no wonder, then, that investors are seeking capital havens and diversification in more stable locations.

In addition, some Chinese citizens have concerns about the quality of life in their country related to air pollution, contaminated foodstuffs and a school system that many believe to be overly rigid and propagandistic. If they follow their funds abroad, some Chinese investors believe, they can free themselves from these problems.

They can also dodge the threat of prison. Since 2012, Chinese President Xi Jinping has cracked down on corruption, in part to stamp out criminality. But in a system where corruption is endemic, very few wealthy members of society are entirely clean of it, and enforcement can become arbitrary or aimed at political enemies. Many of China's rich live in fear of the ominous knock on the door in the middle of the night, and they are searching for ways to escape it.

Investing in the West offers a solution to many of these issues. Western real estate markets are widely believed to be steadier and safer than most, at a time when investments in the developing world seem to be increasingly precarious. The West also provides a place to store capital beyond the immediate reach of the Chinese government — a perk that would come in handy in the event that its owners are caught up in Xi's purge. The gains become even greater if investors and their families can follow the money, physically removing themselves from Beijing's reach. Chinese investors are therefore often more inclined to put their money in markets where doing so opens the door to migrating there.

Among Western destinations, the United States is the most promising in this regard. After all, funding major U.S. real estate projects can, in effect, buy a path toward permanent residency. Created in 1990, the U.S. EB-5 investor program provides a shortcut to green cards for foreign investors in projects that create jobs for Americans. Until recently, the program had never hit its annual cap of 10,000 visas. But over the past few years, it has reached that number months before the year's end, thanks in no small part to a dramatic spike in Chinese EB-5 applications, which now constitute about 90 percent of total applications. By comparison, similar visas in other Western nations are typically more time-consuming and expensive to secure.

Chinese investors may also be more likely to find a home away from home in the United States. Many of the country's "gateway" cities, including New York City, Los Angeles and San Francisco, boast substantial Chinese enclaves. Those who have invested in and moved to these cities can settle in neighborhoods where many people speak Chinese fluently and where Chinese cultural assets, such as restaurants, shops and communal networks, are widely available. Districts like New York City's Flushing, Los Angeles' San Gabriel Valley and the Bay Area's Cupertino all provide the cultural Chinese infrastructure that makes them — and by extension, their broader metropolitan surroundings — more appealing to prospective investor-migrants from mainland China. Few Western cities outside the United States, with the possible exception of Vancouver and Sydney, can claim anything comparable. 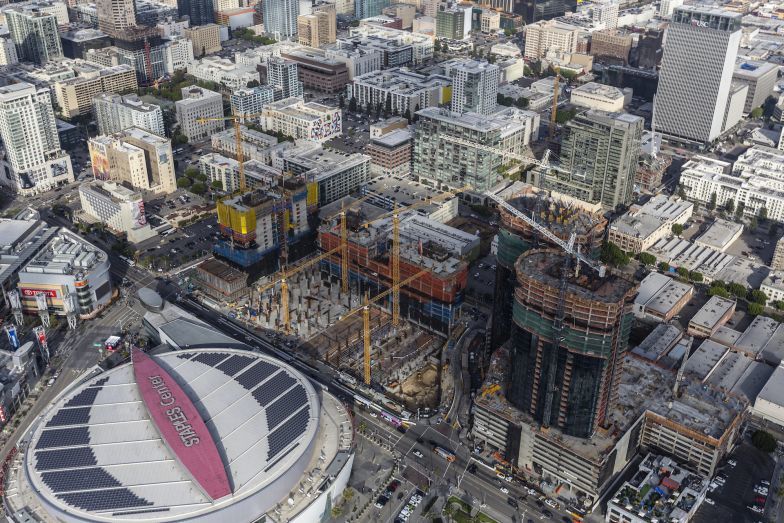 Oceanwide Plaza is a $1 billion, Chinese-owned residential and retail complex in downtown Los Angeles that is expected to open in 2019.

The spate of Chinese investment in U.S. real estate over the past few years will continue to make a notable impact on the industry in both the short and long run. Ongoing purchases will increase the value of the types of property Chinese investors are likely to be interested in, including not only locations in Chinese enclaves but also presitigous buildings and development sites. These property bubbles may only be temporary, liable to burst just as easily as they inflated if Beijing chooses to crack down on outflows of Chinese capital.

The effects of some Chinese projects, however, are likely to be more lasting. Given the unique incentives spurring Chinese investment in the United States — many of which aren't financial — Chinese developers may pursue grandiose projects that builders motivated purely by profit would consider too risky. Should several of these projects arise in the same neighborhood, they could create future development opportunities in areas that would not have emerged otherwise.

Perhaps nowhere is this clearer than in the modern evolution of downtown Los Angeles. Like many cities in the American Southwest, Los Angeles experienced the vast majority of its post-World War II growth outside the city's center. By the turn of the millennium, the downtown area was a business center by day, but a ghost town by night. At the time, much of the district consisted of little more than parking lots.

Over the past two decades, however, the city's downtown has been transformed by growth and development, a success story in which Chinese investment played no small role. The "revitalization" of downtown Los Angeles hit its full stride in 2008 with the completion of the L.A. Live hotel and entertainment complex — a project funded in part by EB-5 investment from China. But that was only the tip of the iceberg. The hotel, located in the formerly barren South Park neighborhood, inspired similar buildings nearby. Today, no fewer than four Chinese-built megaprojects are planned or under construction within a two-block radius of L.A. Live, representing a combined investment of $3.7 billion. American developers are following suit as well, and across the city residents are flocking to the neighborhood. But were it not for the exogenous forces underway in China, such ambitious projects probably would not have sprung up on these sites in Los Angeles, and the city wouldn't look quite so different today.

The Tides Are Changing

The flow of funds from China to the United States' most famous cities may soon ebb, though. As Chinese investors have become more familiar and comfortable with the U.S. real estate market, they have begun shifting their attention away from coastal gateway cities to secondary inland destinations with higher growth rates. Meanwhile, the EB-5 program will soon be up for renewal by the U.S. Congress, a vote whose outcome is by no means guaranteed. Even if it is renewed, the waitlist for EB-5 visas has stretched to 3-5 years, beyond the range of relevance for many would-be investors.

Across the Pacific Ocean, the Chinese government has begun clamping down on capital outflows and making life more difficult for international property investors over the past year. For instance, Beijing is rumored to have demanded that Chinese holding company Anbang Insurance Group sell the Waldorf-Astoria hotel it recently purchased in New York. The government's decision to tighten monetary controls is, by and large, a response to the country's rapidly falling foreign exchange reserves, which have plunged from $4 trillion in 2014 to $3 trillion in 2017. Beijing is desperate to stop the hemorrhaging, which has been caused mostly by foreign investments, and the local property markets in which Chinese buyers have been active have suffered as a result.

The Chinese government, moreover, has begun to redirect its own attention away from the West and toward the developing countries in Asia involved in its Belt and Road Initiative. Beijing will doubtless encourage domestic real estate investors to follow its lead. And as China's gaze turns toward its continental neighbors, the next Chinese property booms may well transform cities like Dhaka or Tashkent, rather than Los Angeles and San Francisco.