Rep. Louis Luchini, D-Ellsworth, responds to the release by a political action committee of an analysis predicting more jobs and revenues if the casino is approved.

A leading opponent of the fall ballot question on a casino in York County said Friday that the campaign supporting the measure was using many of the same tactics others have tried in the past in hopes of getting voters to support a casino in Maine.

Rep. Louis Luchini, D-Ellsworth, co-chairman of the Legislature’s Veterans and Legal Affairs Committee, was responding to a new economic analysis released late Thursday afternoon by Progress for Maine that said a casino would bring thousands of jobs and millions of dollars in new revenue for the state. He said the study is based on building a resort-style casino that the ballot question doesn’t even require.

“Based on the first bullet point in this study, the impact is based on a resort casino with a hotel and a convention center, but none of those are required in the ballot question law as it is proposed,” Luchini said. “These are the same empty promises of jobs and development that we have seen time and time again and they have not come to fruition.”

Progress for Maine, the political action committee backing the casino campaign, released the analysis by the Florida-based consulting firm Evans, Carroll & Associates pointing to positive numbers that show job creation and even a boost to York County’s median household incomes. It also touted the consultant as a leading economic forecaster with a solid track record in other states. 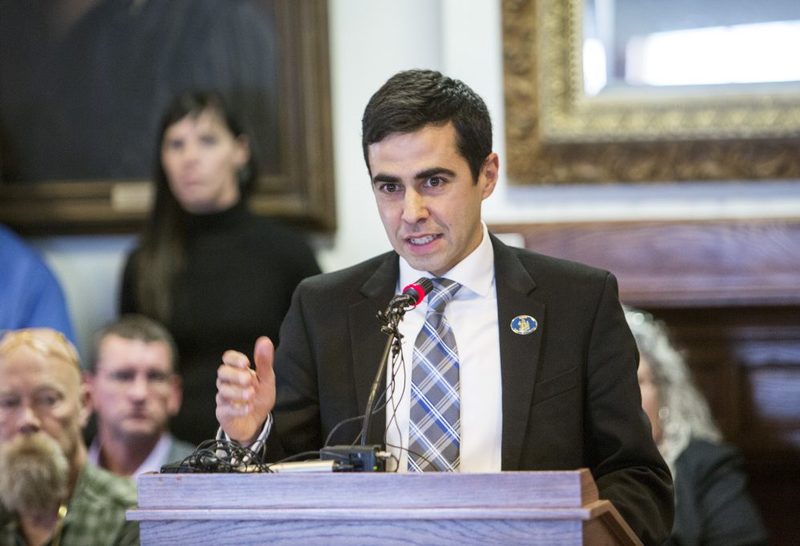 Rep. Louis Luchini, D-Ellsworth, seen at the State House on Jan. 17, said Friday that an economic impact study by the backers of a York County casino contains "the same empty promises of jobs and development that we have seen time and time again."

The firm, however, has been the subject of some controversy, including its involvement with helping the family business of President Trump’s son-in-law Jared Kushner qualify one of its buildings for a federal investment program designed to help struggling areas using the EB-5 visa program.

The Kushner building in question is in a bustling New Jersey waterfront area facing the Manhattan skyline, and the specific census tract where the Kushner Cos.’ building was located had an average unemployment rate of 1.3 percent.

Evans, Carroll & Associates created an oddly shaped map that included several high unemployment areas several miles away. They had an overall unemployment rate of 9.8 percent – high enough to qualify for an investment program that allows foreign investors to receive permanent residence status after they invest between $500,000 and $1 million in an economic development project that creates or helps retain 10 or more local jobs.

Critics have faulted the program for failing to bring investment into poor communities as intended, according to The Associated Press. By gerrymandering rich geographic areas into the same maps with poor ones, developers have managed to win approval from economic development authorities for luxury projects in Manhattan, California’s Beverly Hills and Miami’s South Beach.

Evans, Carroll & Associates is not the first company dealing in the controversial EB-5 program to join the casino campaign. Also providing thousands of dollars of in-kind support to Progress for Maine is American General Corp., a California-based company that also specializes in the EB-5 investment program and appears to be headed by David Wilson, one of the partners of two other businesses connected to Shawn Scott.

Scott, an international gambling entrepreneur, won voter approval to add slot machines to Bangor’s struggling horse track in 2003, bringing Maine its first casino. Scott then sold those rights to Penn National – which still operates what is now Bangor’s Hollywood Casino – for $51 million as regulators scrutinized his businesses and associates. The upcoming casino referendum, which will appear as Question 1, is intended to give exclusive rights to develop a casino only to Shawn Scott or a company owned by him. A license for a casino in York County is estimated to be worth as much as $200 million, officials say.

Michael Sherry, a spokesman for Progress for Maine from the Boston-based public relations firm O’Neill and Associates, said in an email Friday: “Evans, Carroll & Associates is a highly regarded economic consultant with a long list of clients. We can’t speak to their other projects, but they were hired on the basis of their reputation for quality work, and we believe their expertise is reflected in the study they completed yesterday.”

Sherry on Thursday also released a statement announcing Falmouth resident Rebecca Foster as the campaign’s official spokeswoman, but would not provide contact information for Foster on Friday.

Sherry has previously said that Scott and Wilson, partners in the company Atlantic & Pacific Realty Capital, would be the developers of the proposed casino and “are the primary backers of the campaign.”

Critics, including Luchini, say they believe Scott would not pass licensing requirements in Maine and is more likely to quickly sell his rights to the license. Luchini said any promises being made by the campaign would ultimately be left to whoever purchases Scott’s company and the casino license, if voters support the ballot question.

“This would be one of the various shell companies Shawn Scott operates, and if they were to get the casino, … they would flip to somebody else almost immediately because I don’t think this guy Shawn Scott would ever be able to get a license in the United States,” Luchini said.

He said if Maine were to get another casino, it should be done in a competitive bidding process that allows the state and its citizens to get the maximum economic benefit. “This is the type of group we just wouldn’t want operating in Maine, from my point of view,” Luchini said.

At least one study commissioned by the Legislature in 2014 showed Maine’s economy could sustain one more casino. But the study also suggested the state make the licensing of the casino a competitive bid process requiring a high licensing fee and a minimum investment of $250 million. Lawmakers have never taken any action on setting up a casino licensing regime and have largely left it to voters.

Scott is also vice chairman and director of business development for another company, Bridge Capital based in the Northern Mariana Islands, a U.S. territory in the South Pacific. Scott also heads a third company, Capital Seven, which appears to be based in Las Vegas. All three of Scott’s companies, along with several headed by his sister, Miami real estate developer Lisa Scott, have either contributed funding or loans to the ballot question effort, based on campaign finance reports with the Maine Commission on Governmental Ethics and Election Practices.

A Japan-based company, Regent Able Associate Co., has also loaned $1.2 million to one of the multiple ballot question committees Lisa Scott set up to support the campaign to gather voter signatures to get the measure on the ballot, which ultimately cost about $4.3 million in total.

It remains unclear why the campaign for the casino set up such a complex array of ballot question committees and why it has worked so hard to conceal its funding sources. Some of the campaign’s backers remain the subject of investigations by the Legislature and the ethics commission.

Progress for Maine has also used social media, especially Twitter, to attack Richard “Dick” Duchossois, a wealthy Illinois businessman who has ownership stakes in Churchill Downs, the horse racing and casino company based in Kentucky that owns and operates the Oxford Casino. In tweets Friday, the campaign suggested that Duchossois is behind an effort to oppose the York casino ballot question.

Churchill Downs purchased the Oxford Casino in 2013, paying $160 million in cash for the property and recently completed a $25 million hotel project at the facility in Oxford.

So far, no formal opposition has emerged against the casino. With only about eight weeks until Election Day, it did not appear any television advertising had been purchased with any of Maine’s largest television stations, based on a review of public records on file with the Federal Communications Commission, as of Friday.