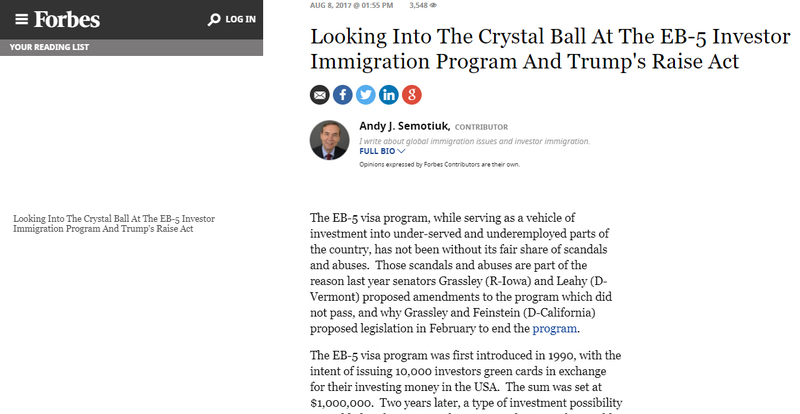 The EB-5 visa program, while serving as a vehicle of investment into under-served and underemployed parts of the country, has not been without its fair share of scandals and abuses. Those scandals and abuses are part of the reason last year senators Grassley (R-Iowa) and Leahy (D-Vermont) proposed amendments to the program which did not pass, and why Grassley and Feinstein (D-California) proposed legislation in February to end the program.

The EB-5 visa program was first introduced in 1990, with the intent of issuing 10,000 investors green cards in exchange for their investing money in the USA. The sum was set at $1,000,000. Two years later, a type of investment possibility was added to the visas involving regional centers that could initiate investment projects, allowing individuals to invest $500,000, not a million, so long as the money was going towards impoverished parts of the U.S., where the employment rate was at least 150% of the national average. Unfortunately, the way in which an area is determined to be suitable for a EB-5 regional center had a few loopholes, leading to some of the more recent scandalous abuses of the program, such as the fact that money from the EB-5 program has gone to fund prime properties in Manhattan and Beverly Hills, or more recently in Florida, than the poor and impoverished areas that this type of investment was supposed to improve.

These scandals only really started appearing after the great recession of 2007-2008, when money for real estate investment became tight, and developers had to look for new sources of financing. Suddenly, pooled investments in regional centers became attractive sources of low interest financing. The vast majority (over 80%) of the people receiving these visas come from China, leading the program to be characterized as a scam to bring in wealthy Chinese. And as developers became aware of the possibilities, what can only be described as gerrymandering of the approvable areas, so-called “Targeted Employment Areas” (TEAs) where EB-5 regional centers can be established began.

This was possible because states are put in charge of designating regional centers, with the only requirement being that the centers be situated adjacent to low income census districts. So a regional center would be established by taking the desired upscale location a developer wants to build a hotel, for instance, and then snaking out a region, census district by district, until it reached poorer census districts, and adding them to the regional area until the average unemployment reached desired levels. The poorer districts in the regional area would receive none of the investment, as it would all be pooled towards the upscale development

These are all important things to keep in mind as September 30, 2017 draws nearer. The EB-5 program is not a permanent visa program. Rather, it is a program that has to be renewed every few years. It was originally scheduled to sunset on April 28, 2017, but was extended with the omnibus spending bill that funded the government for the first half year of the Trump presidency.

Most of the proposals for fixing these problems in the EB-5 program have revolved around the gerrymandering issue, with some sort of further guidelines being issued as to how many census districts can be in any regional center, and how the districts might be connected to one another. If both are limited and defined, then it would be far harder to create the kind of lopsided districts that funnel investments to already rich areas.

Another issue has been the amount of money required for an investor to obtain a visa. The amounts of $500,000 and $1,000,000 have not changed since 1990, and most recent proposals have attempted to raise these numbers to account for inflation. Recent attempts have proposed numbers around $850,000 and $1,300,000 respectively.

The RAISE act introduced on August 2nd, 2017 may hint at a different solution in the works.  One of the criteria in the immigration points system was investing either $1,350,000 or $1,800,000 into a business. This could mean that the current administration is planning to roll investor immigration for the purposes of green cards into the skilled immigration system. The other change in the RAISE act would be cutting out the possibility of passive investment. At both the $1,350,000 level and the $1,800,000 level, the investments require active management. However, the amount of time the investments have to be maintained has been dropped from 5 years to 3 years.

Put together, these proposed changes in the RAISE act would eliminate some, but not all of the perceived inadequacies of the EB-5 system, while introducing new ones such as lumping together skilled professionals and investor immigrants. While it is difficult to peer into a crystal ball and prognosticate the future, the continued existence of the EB-5 program might depend on how likely congress thinks an overall overhaul of the immigration system is to be passed in the near future. However, there are some integrity improvements sorely needed that many EB-5 advocates support. These include:

There is a widely held expectation that many of these changes will be implemented, one way or another, at the end of September of this year or some time shortly thereafter.